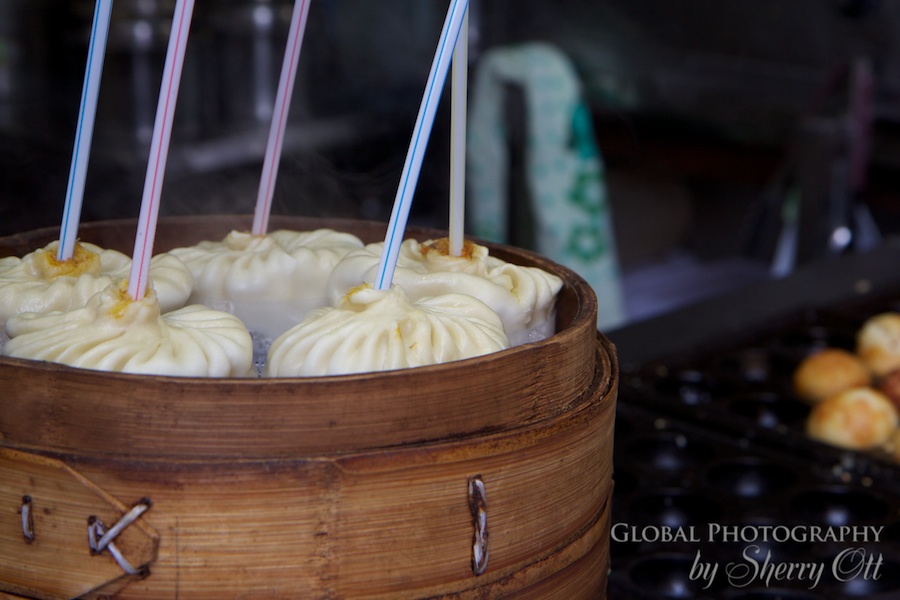 Dumplings you eat with a straw!

My first memory of international cuisine was when I was 12 years old.  I’ll never forget going to a Chinese restaurant in Peoria, Illinois for the first time. It was darkly lit, with big round tables and little cups for tea. I was fascinated with these cups because they didn’t have handles – unconventional for my Midwest life.  My dad ordered some dishes for our table; sweet and sour pork, wontons, egg foo young, and pork chow mien. I remember being that awkward age that hated eating anything that I didn’t know, but wanting to try new things. I had no idea how to use the chopsticks in front of me – they seemed as confusing and impossible as solving my Rubik’s Cube – but that was the first of many Chinese dinners I had in my hometown of Peoria. Chinese food reminds me of my childhood and exploration of new things, so when I landed in China for my 8 day trip with Wendy Wu Tours, I was excited for one thing – I wanted to eat!

Though China may seem daunting due to the language barriers, your local guide can lead you through all the tough decisions – like what to eat! They can help you order and work your way through the maze of menus. Most of the restaurants that we went into were gigantic, with big round tables and a lazy Susan in the middle for easy sharing. The menus tended to be the size of an old Sears Catalog and include pictures and English, which made things a little easier. These are great places to eat but it you want to throw caution to the wind and find some restaurants that are smaller and don’t have pictures or English menus, then just ask your guide and they’ll lead you deep into the alleys of China to eat. After all, travel is about going local and exploration of new things! 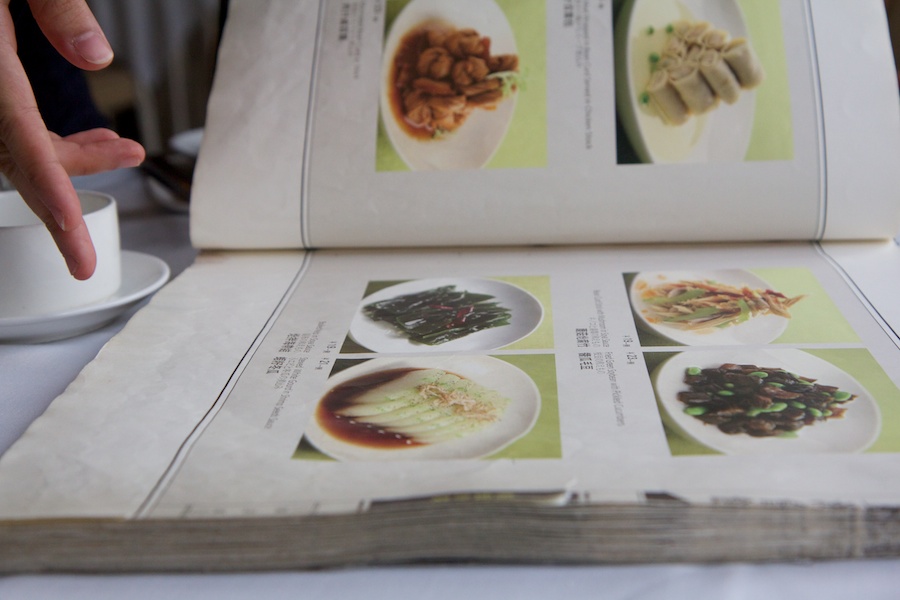 A super thick menu with pictures

I quickly learned that dumplings are a staple in Shanghai, little bites of flavorful goodness; but in Shanghai you get something extra in your dumpling – soup.  I had my first soup dumpling at breakfast (yes, dumplings for breakfast). I was startled when I bit into what I thought was a normal dumpling and soup came out and subsequently went all over me! I pretty quickly learned that Shanghai dumplings need to be eaten with care. Shanghai is known for 2 main kinds of dumplings: Xiao Long Bao, a dumpling made of wheat dough that is steamed, and Sheng Jian Bao, made of a thicker dough first fried in a cast iron skillet and then steamed. Both are typically made of pork and have a gelatin soup inside that gets heated and liquefied when steamed. Dip them in a vinegar soy mixture and try to poke a hole in it first so that you can ‘drink’ out the soup or at least let it cool before you bite into it!  My favorite way to eat them was with a straw.

Xiao Long Bao – or XLB as the cool kids refer to them!

In Xi’an we not only ate dumplings (jiaozi), we learned how to make them.  Our teacher, Chef Jin, makes about 3,500 dumplings a night, which explains why her super power is to make dumplings lightning fast. Seriously, if you blink you’ll miss it and will all of a sudden have a butterfly shaped dumpling in front of you. Chef Jin works at the Shaanxi Sunshine Lido Grand Theatre (and in the time it took you to read that title, she made 4 dumplings). She makes dumplings every night for customers who come to the cultural theater show. Her dumplings are in the shape of butterflies, roses, swans, cabbages, and ducks.  However, for teaching purposes she kept the shapes simple and slowed down long enough to show us how to roll out the dough, spread in the filling, and then form them into shapes.  Mine didn’t turn out too shapely, which made me conclude that I’d rather eat them than make them.

Rolling out dumpling dough in Xi’an

In our quest for local food, our Shanghai guide took us for a traditional breakfast enjoyed by the fast paced business workers in Shanghai – warm, sweet soymilk and a fried breadstick. Yon Ho is a fast food chain that started as a street stall in Taiwan and now sells their soybean milk all over China. The drink sort of tastes like what’s left in the bottom of a cereal bowl once all the cereal is gone and immediately won me over! It was fun to be the only foreigners in the restaurant and watch a steady stream of young business professionals come in and eat before work. Sort of like the Chinese Starbucks – a cool (and tasty) view of daily life in Shanghai! 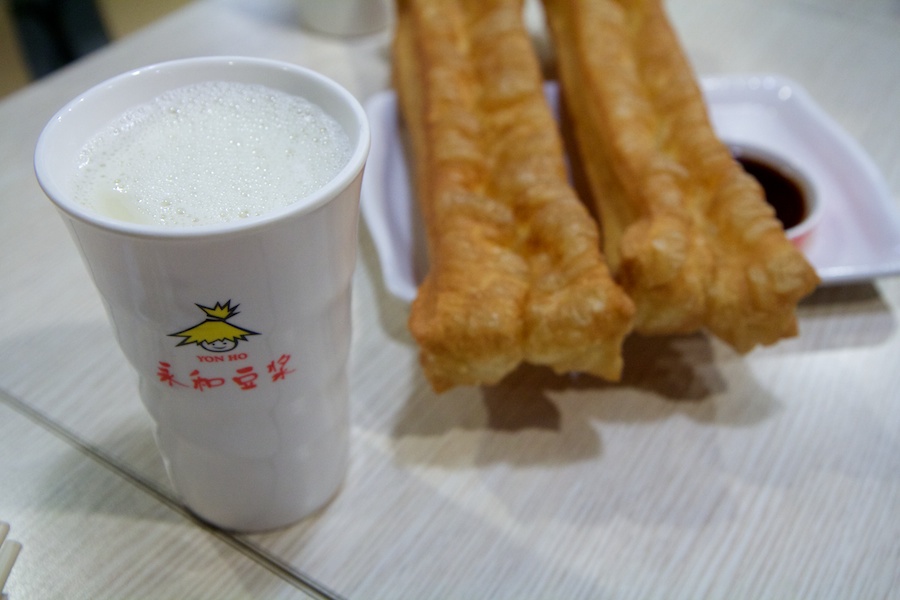 Have you ever heard a noodle? In Xi’an if you listen carefully you’ll hear why the Biangbiang noodle got its name. It is named after the sound of dough being thwacked on the chopping board so it can be stretched into one very long belt-like lasagna noodle. We stopped at a local food court inside the old city in Xi’an and saw the noodles being made and then slurped them down in a delicious broth mixture with soy, peppers, and scallions. And if you are wondering, in China it’s perfectly acceptable to slurp your noodles! 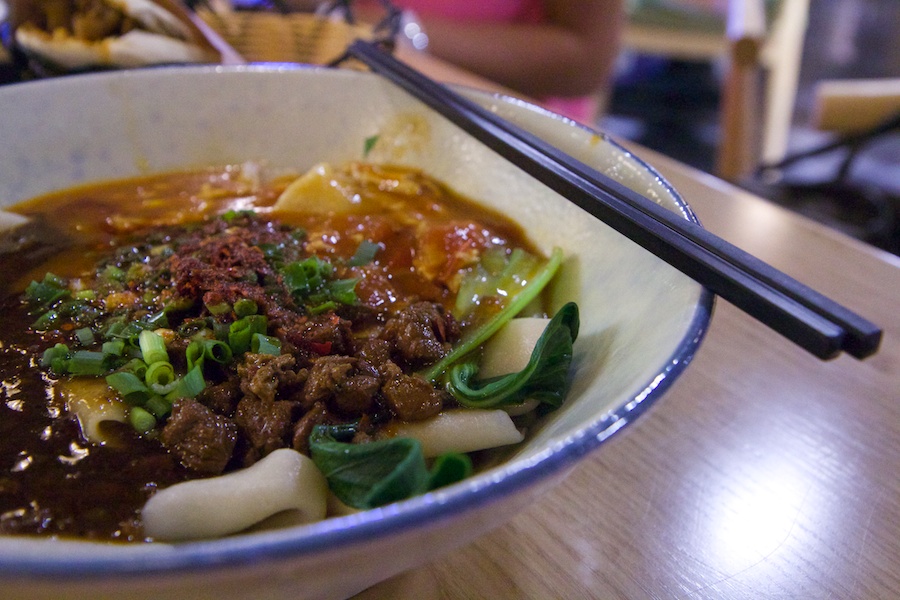 Biangbiang noodles in a soupy broth

My other favorite noodle was the Peking noodle dish found in Beijing.  The noodles are long, cylinder shaped, and delicious. My favorite part was that the noodles, vegetables, and sauce were brought out in separate bowls and it was up to us to mix the three items together at the table…with chopsticks.  Good luck…the taste is worth it! 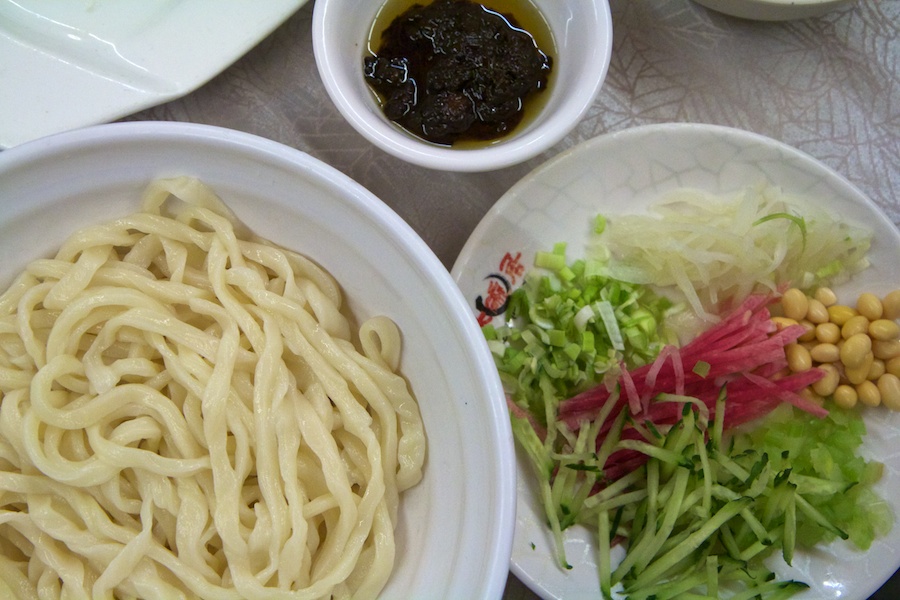 Peking Noodles is a dish you need to put together yourself!

It might look slightly unappetizing to have a whole duck brought out to your table, but trust me on this and say ‘yes’ to Peking Duck when in Beijing! The duck is best known for its breeding and roasting process; plus it was once the food of Emperors.

We went to Da Wan Ju, a small, local restaurant near the Wangfujing night market. Once the duck is carved by your table, you eat it in a pancake with scallions, cucumber and sweet bean sauce all rolled up like a taco. However, I’m not sure what I liked the most – the duck breast ‘taco’ or the crispy skin! For pure decadence, try dipping the crispy skin in sugar – the ultimate treat! 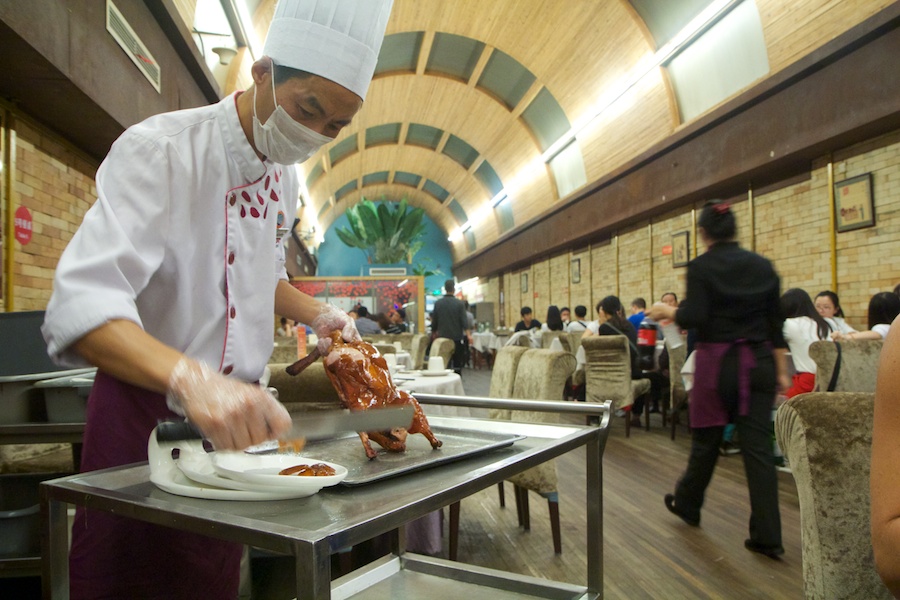 Carving Peking Duck at our table

If you want to get a little bolder, then try the street food in China!  Don’t get scared away by Beijing’s Wangfujing night market, which tends to cater to tourists more than locals. It’s a market with split personalities – it has a bunch of great traditional street food such as noodles, dumplings, and soups mixed with creepy crawlies on a stick. It’s definitely worth a visit to see how daring you are!  I decided to try dessert there after our Peking Duck dinner, sweet sticky rice ‘pops’ on a stick were the perfect ending! 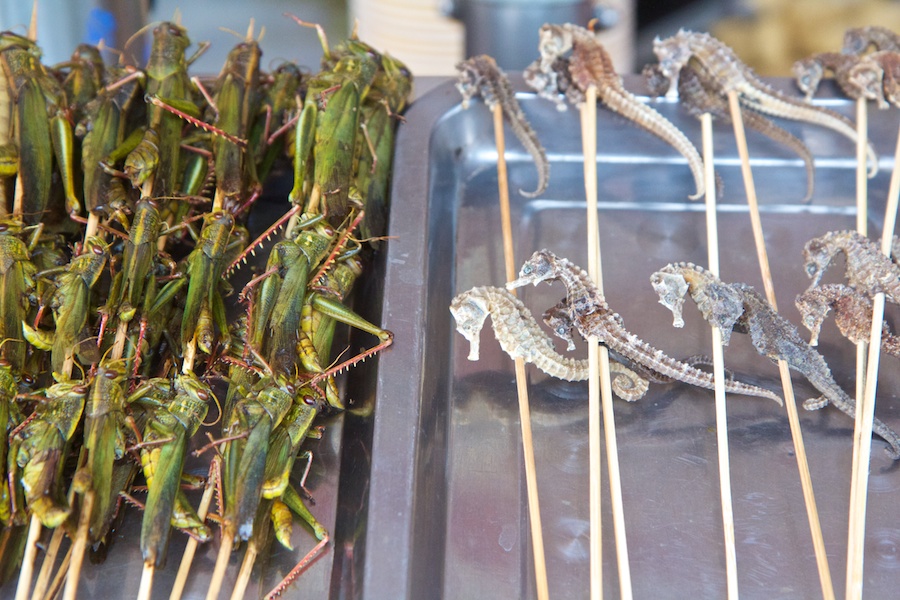 Luckily I was already full when we came across these delicacies!

There are plenty of other street markets selling food all over China’s cities that are geared to locals and your guide can help you find. Our guide led us to the Chang li neighborhood in Shanghai to try some local street food.  Nestled among retail stores, the market smelled of durian and was filled with businessmen and women stopping to get dinner on their way home from work. The food is cooked right in front of you and I suggest you just pick the stand with the biggest line! The other great thing about local street food is it’s cheap; I had a giant noodle and veggie dish for only $1.20 USD.

If you are looking for those crispy sweet fortune cookies at the end of you meal in China, you’ll be waiting forever. In fact 90% of Chinese people don’t even know what they are.  One of my biggest surprises was learning that fortune cookies aren’t really from China at all; they are from the United States, created in San Francisco.

The food in China was nothing like what I grew up eating at my family’s favorite Chinese restaurant in Peoria; instead it was infinitely better. And like most things in the world of travel, it’s even better when you can get out and explore the local scene, because it’s all about the journey.

Sherry Ott is a long term traveler, blogger and photographer without a home. She spent a year living in Vietnam, hiked the Annapurna Circuit, did cultural exchange programs in the Middle East, drove 10,000 miles from London to Mongolia, and walked across Spain on the Camino de Santiago. She seeks out adventurous opportunities to inspire people to overcome their fears and reap the benefits of travel. Hear more about her journey to China with Wendy Wu Tours at AFAR.com.