A question weighed heavy on my mind as my plane circled the landing strip at Mount Hagen, somewhere over the rugged heart of Papua New Guinea, a spellbinding place where the verdant Wahgi Valley is buttressed by the towering spires of the imposing Central Cordillera.

How do I live like a local out here? 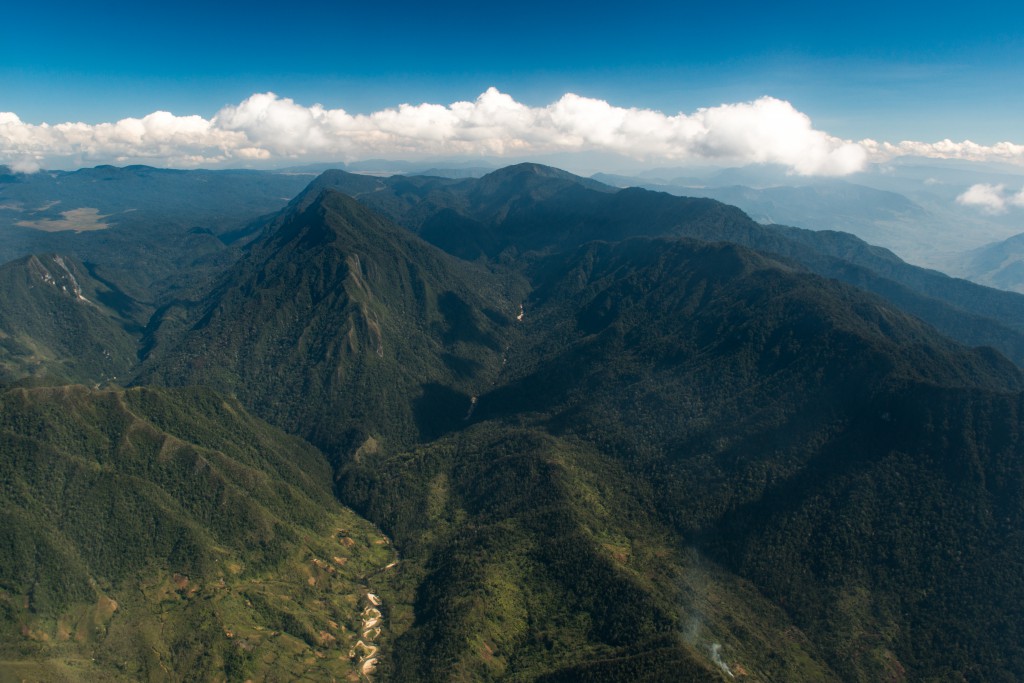 Swain Destinations, USTOA and AFAR sent me halfway around the world to get at the essential nature of the PNG travel experience; to meet local folks here, there, and everywhere; and to discover a remarkable moment or two. But how to do all that in a place as unique as Papua New Guinea? Where to begin?

PNG has a reputation for being one of the wildest places on earth – millions of people in the vast interior and out along the coast continue to practice subsistence farming and fishing as they have done for tens of thousands of years; more than 800 languages and dialects flit on air currents from the Bismark to the Coral Sea; while rumors abound of highland people whom have never had contact with the outside world. In fact, the people of Mount Hagen were first introduced –not by their choice, mind you – to the West in 1933. So how would I, as a traveler, reconcile this PNG with the way I live my own life back home on North American soil?

Turns out, all I had to do was smile. 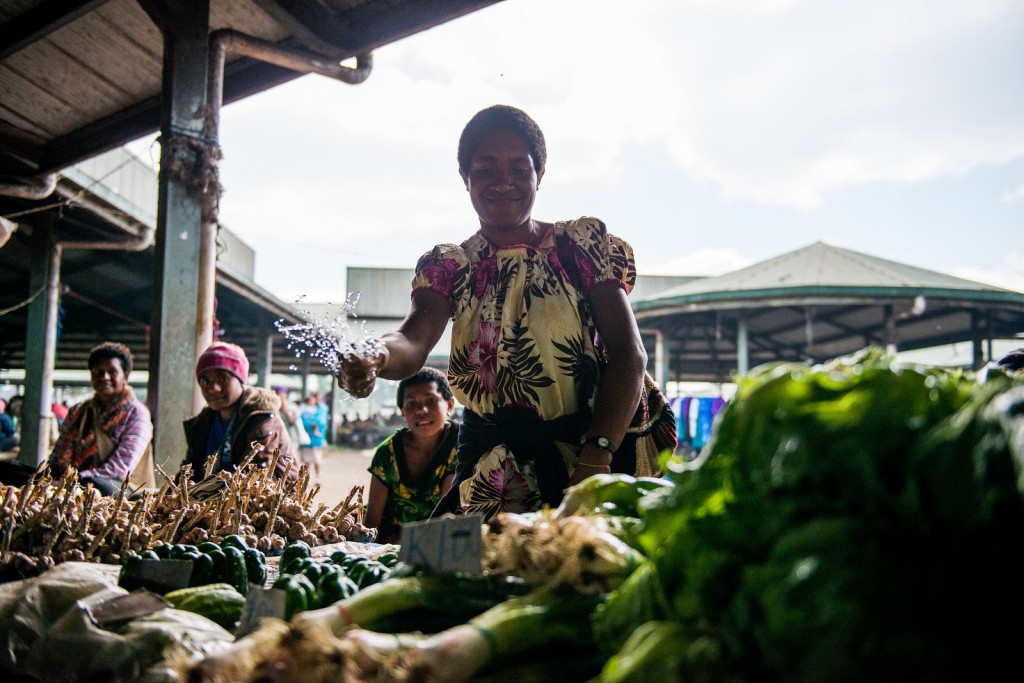 The secret to keeping veggies fresh at Mount Hagen Market.

After landing at Mount Hagen, my fellow Swain Destinations travelers and I were carted over to the Mount Hagen Market, a buzzing hive of human (and not-quite-human) activity. I made fast friends with a betel nut vendor’s tree kangaroo, zipped between rows of impossibly colorful fruits with names I couldn’t possibly pronounce, skipped over scurrying chickens, and shook hands with just about every man and woman in attendance. There was electric undercurrent to our visit – our group made up the entire foreign presence at the market that day, and it was certainly no secret that we were there. 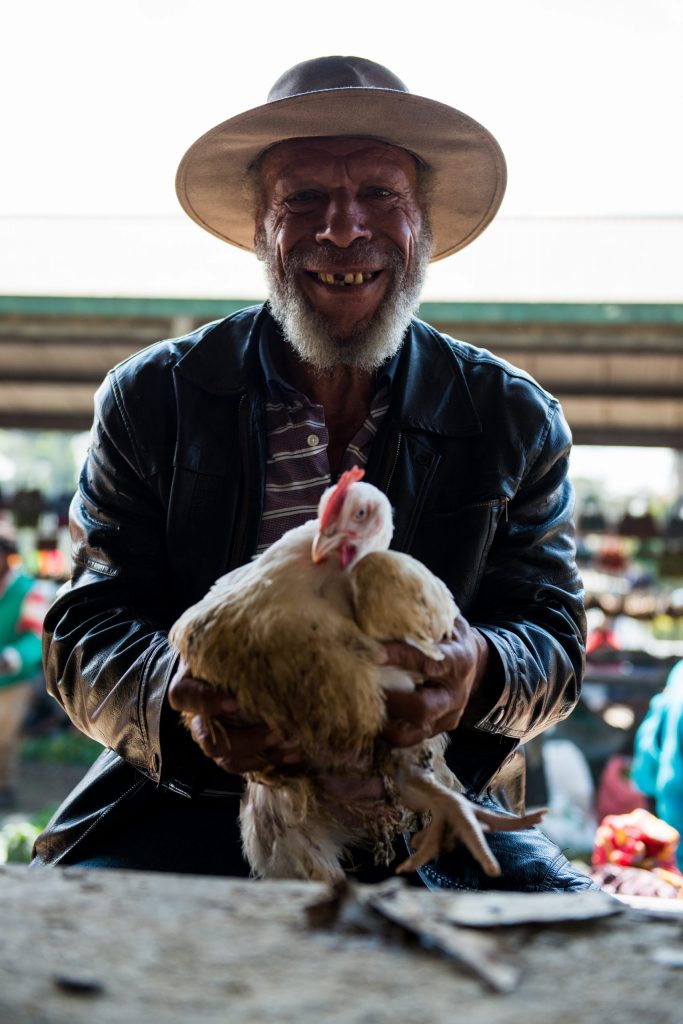 Papua New Guineans are often quick with a smile – and a chicken.

Wide-eyed children fell over one another in an effort to get in front of my camera, convivial ladies carved up fruits and veggies and doled out generous samples, and men with steel in their eyes and machetes on their shoulders smiled enormous betel nut smiles when a casual grin was sent in their direction. In this place of vast differences, the one constant – though it was kept concealed at first – was the smile. 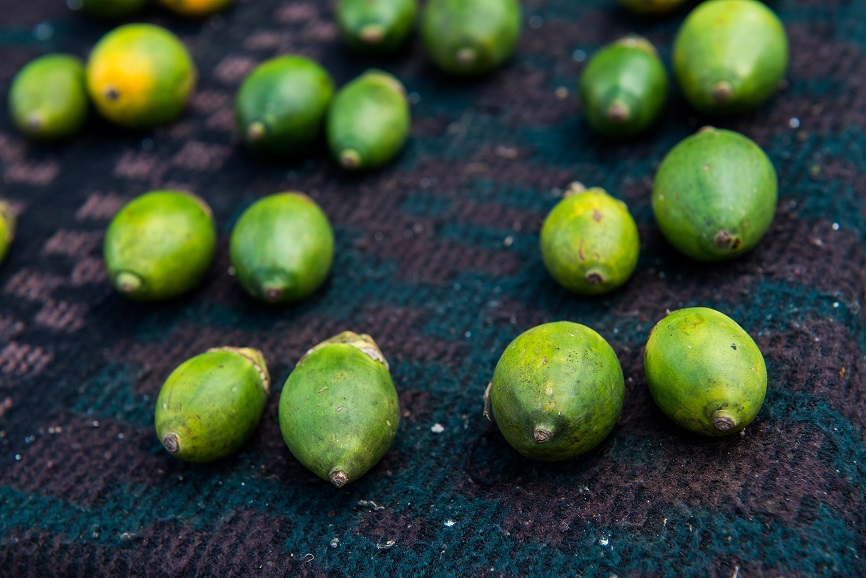 The ubiquitous – and notorious – betel nut. Betel nut is often chewed with lime in Papua New Guinea, and produces a red residue called buai pekpek, a common sight on streets floors everywhere (save for Port Moresby, where the chewing of betel nut is banned).

Mount Hagen’s reputation as a lawless frontier keeps some visitors at bay, but nothing during our visit set off alarms. In fact, the local folk we did meet couldn’t have been warmer or more welcoming.  Save for the terrifying Asaro Mudmen we encountered in the hills.

We followed a winding dirt road into the highlands, out past quaint villages, perfectly manicured fields, and children playing in small mountain streams. We came to a stop opposite what seemed to be impenetrable bush, but our guide led us down an otherwise impossible to find path to the gate for the Pogla Cultural Centre. Upon crossing the threshold, I was struck by what I can only describe as an otherworldly presence; an elderly woman in full highland regalia tended to a small fire, while opaque specters danced in the bush beyond the flames. As if on cue, the sky clouded over, and the Asaro Mudmen came stalking out of the green. These ghastly apparitions wore skirts of grass and leaves, long talons of bamboo on their fingertips, white mud on every inch of their bodies, and imposing helmets of mud, each decorated with what I could only presume were human teeth and animal horns. The Mudmen cut a striking figure against their surroundings; I could only imagine what their true enemies must have thought when the Mudmen set upon them during battle. 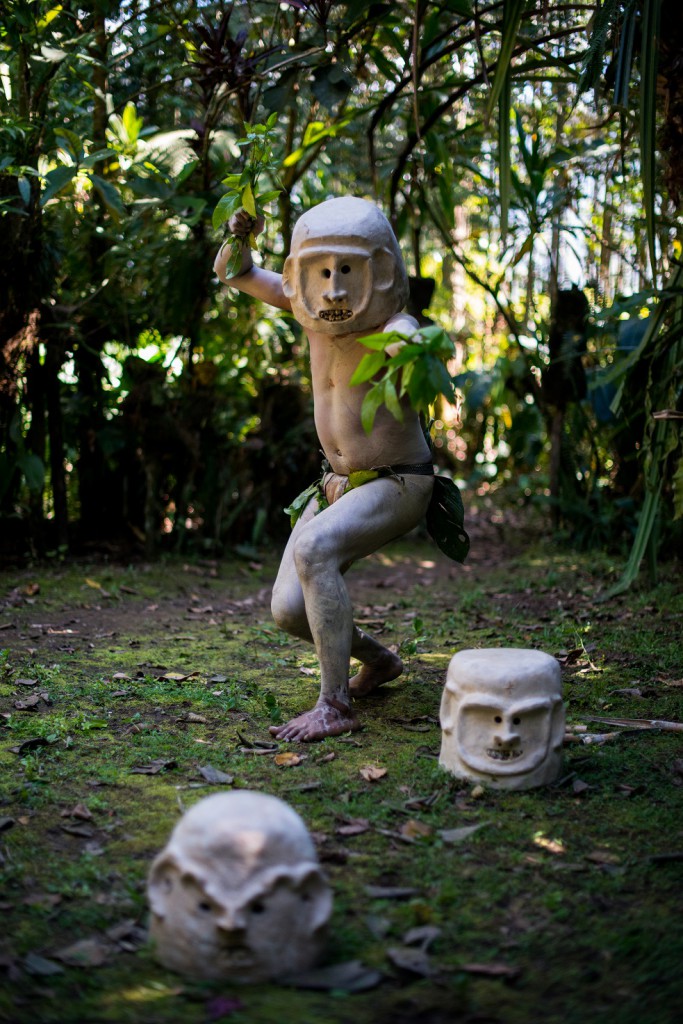 The Mudmen appear as ghostly appiritions from the woods, ready to strike fear into the hearts of their enemies.

Legend holds that a band of peaceful villagers, originally from the village of Goroka in the Eastern Highlands, were waylaid by another tribe and forced to abscond from their traditional homelands. These villages were chased into the Asaro River, where they waited for the cover of night to aid in their escape. But as they rose from the water covered in mud, their enemies thought them evil spirits, and retreated in terror. The Asaro Mudmen then began crafting their incredible helmets to use as a deterrent against any would-be invaders. 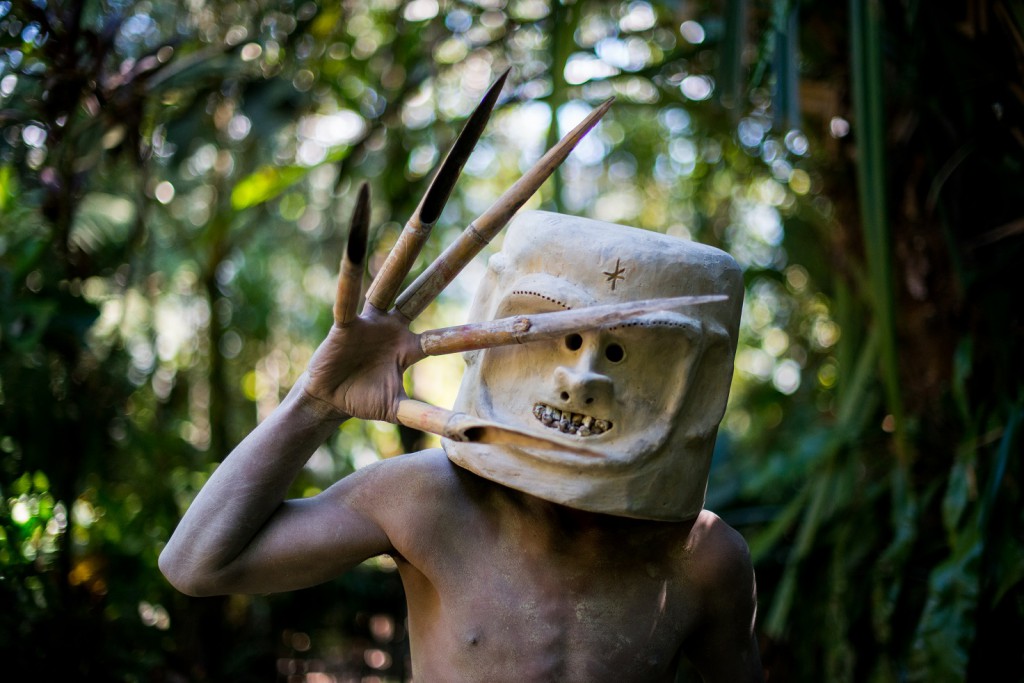 Mudmen make their helmets from river mud and stone, and sometimes decorate them with human teeth, horns, and feathers. The fingers pieces are made from sharpened bamboo.

Our group managed to hang in for the entire performance put on by the Mudmen, and were granted an opportunity to peek behind the masks, where huge smiles were hiding. Our Mudmen ranged in age from 9-16, and are part of a family dedicating to preserving an antiquated way of life and scores of highlands traditions. The family’s patriarch shared with us Mudmen lore, and his reasons for why it is important that native highlanders protect their ancient traditions in the face of an ever-modernizing Papua New Guinea. 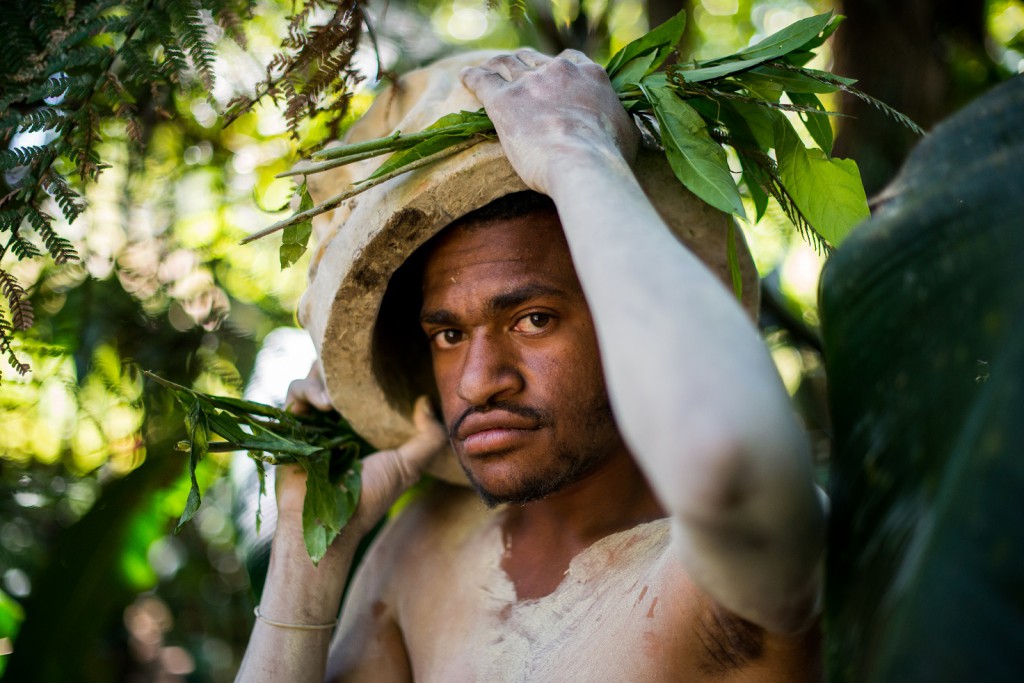 A friendly face appear from under a heavy helmet.

My first real glimpse at life in PNG ended with a visit to the beautiful lodge at Rondon Ridge, located at 7,100-feet above sea level on the hipbone of Kum Mountain. I marveled at the mountain views as I contemplated life in the valley below. I think it was in that moment that I realized just how awesome the opportunity before me was – a chance few people on earth have to experience an ancient culture and way of life quickly vanishing from the face of the earth. I decided that if I couldn’t exactly live like a local in my limited time in PNG, I would learn all I could about a very special way of life. 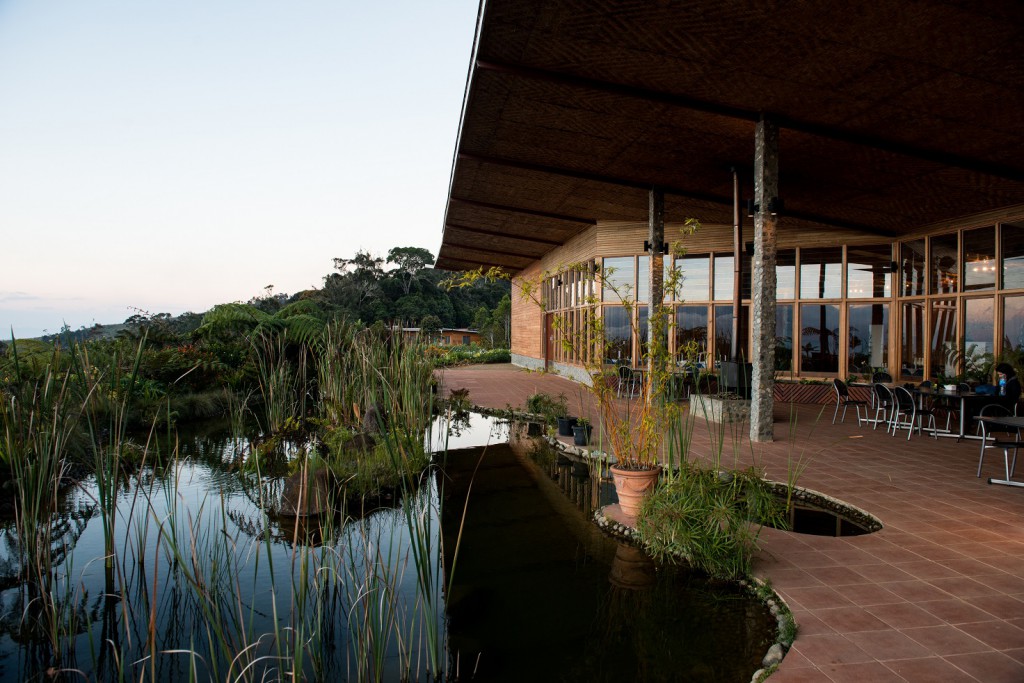 The serene surroundings of Rondon Ridge.