It was the morning of my fifth day of an eight-day tour for USTOA tour operator member Ritz Tours and the tour was set to leave Kaohsiung in southeastern Taiwan. I remember getting on the bus with mixed expectations: I was extremely satisfied with what I had seen of the coast line from Taipei to Kaohsiung, but the cynic in me didn’t expect to see much variety in the sights scheduled for Taiwan’s southern and eastern coasts. However, not too far into our drive that day, these notions were squashed with our arrival at the Kenting National Park. 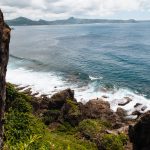 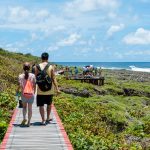 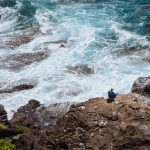 There was a change in both the climate and the topography of the land outside. The highway we were on crept closer to the ocean, and we got our first glimpse of the picture-perfect turquoise waters of southern Taiwan. The dense forested mountains outside the bus transformed into porous, jagged rock leftover from volcanoes long ago. We were now in the tropical region of Taiwan, and the evidence was all around: the swaying palms, the whitewash of the beach, and the horizon melting under the sun in the distance. 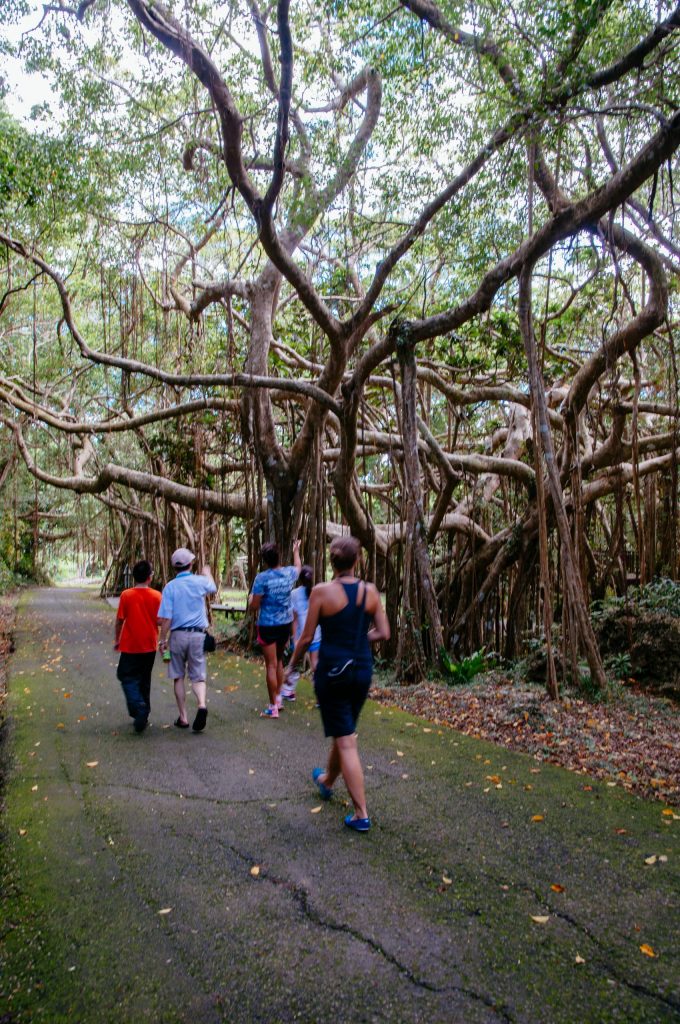 Kenting National Park is gorgeous and has a very diverse ecology. Two of the areas I thoroughly enjoyed within the park were the Eluanbi Lighthouse and the Kenting National Forest Recreational Area. The lighthouse was beautiful, but what I really enjoyed were the elevated walking trails which ran alongside the rocky shore. The Forest Recreational Area is a sanctuary for multiple species of birds and butterflies, and the biodiversity of plant life attracts millions. One big contributor to the park’s popularity in recent years is Taiwanese director Ang Lee’s choice to use some of the park’s scenery for a couple scenes in the hit film The Life of Pi.

We left Kenting National Park and went north via Highway 11, the splendid stretch of highway which runs along the unspoiled coasts of eastern Taiwan. It’s sparsely populated out east and the abundant beauty really made me feel nostalgic for road trips, camping, or surfing trips on the USA’s west coast. Those interested in geology, or nature in general, will want to stop at Hsiao Yeliu, a coastal park with very unique and mysterious rock formations. Here, thousands of years of wind and salt water have created the earth’s breaching crust to smooth and contort in very odd ways. Walking out on the rocks is encouraged, and doing so will make you feel as if you’ve stepped into a Salvador Dali landscape. 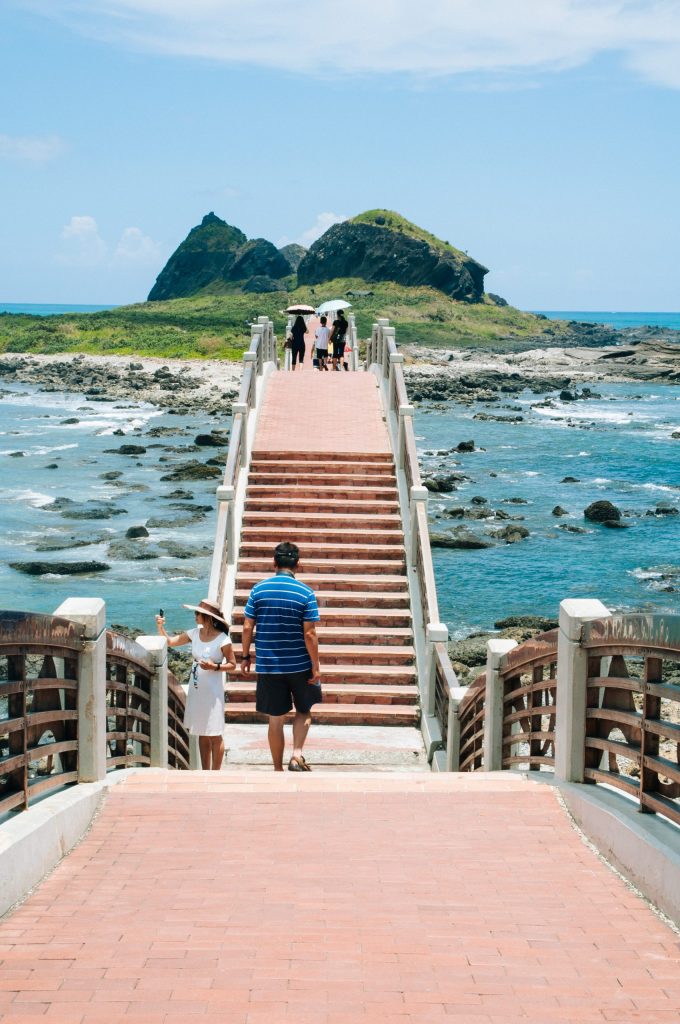 Another memorable stop we made not far from Hsiao Yeliu was the Platform of the Three Mortals (Sansiantai), where an arched bridge stretches out onto a small coral island. The three hulking rock masses on the island have links to Chinese mythology, but what I found more enjoyable was the unique bridge and a nearby beach comprised of varying size of round stones. One of the last scheduled stops on our west coast itinerary had to be altered due to typhoon flooding, and unfortunately our options at the famous Taroko Gorge were limited. Nevertheless, we made the most of the opportunity to take a small hike over a suspension bridge and up through a tunnel to visit the Eternal Spring Shine, which was built in dedication to 450 workers who lost their lives creating road tunnels through the mountainous park. 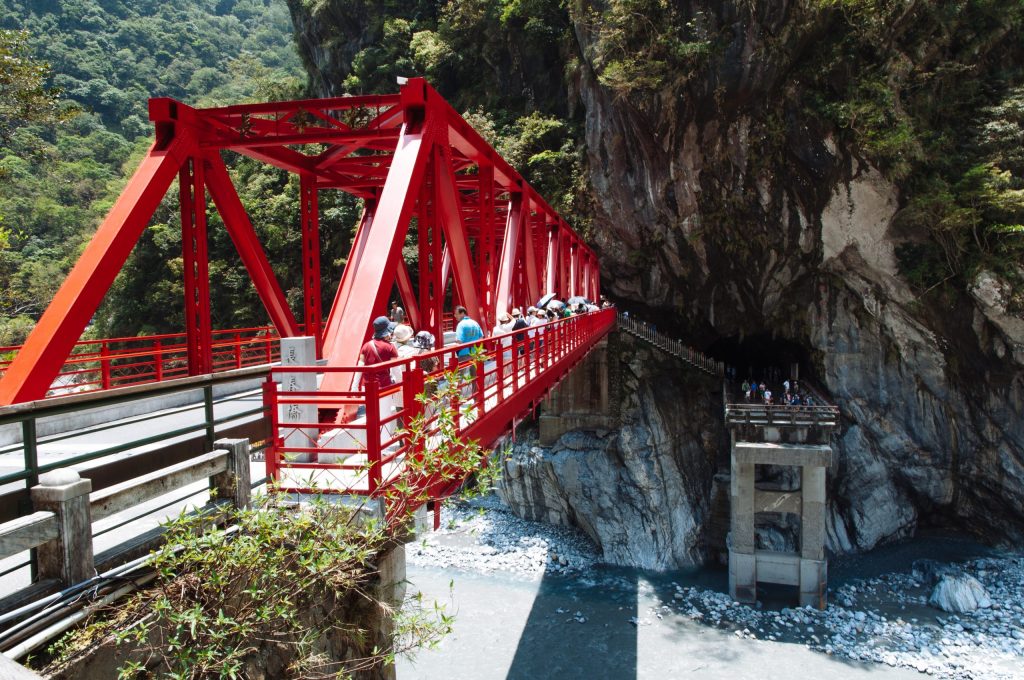 On my last day in Taiwan I got the pleasure of visiting the former gold mining town of Jiufen, located in the extreme northeast. Jiufen Old Street is one of the main attractions, and is one raucous bazaar of a street. On both sides of the narrow lane there are cooks and salesman touting the nourishing properties of their vegetable dumplings or the potency of their green tea. After exiting the mayhem, my group rehabilitated at one of the local teahouses. We were served a light lunch which was followed by a tea ceremony, a tranquil end to my incredible journey. 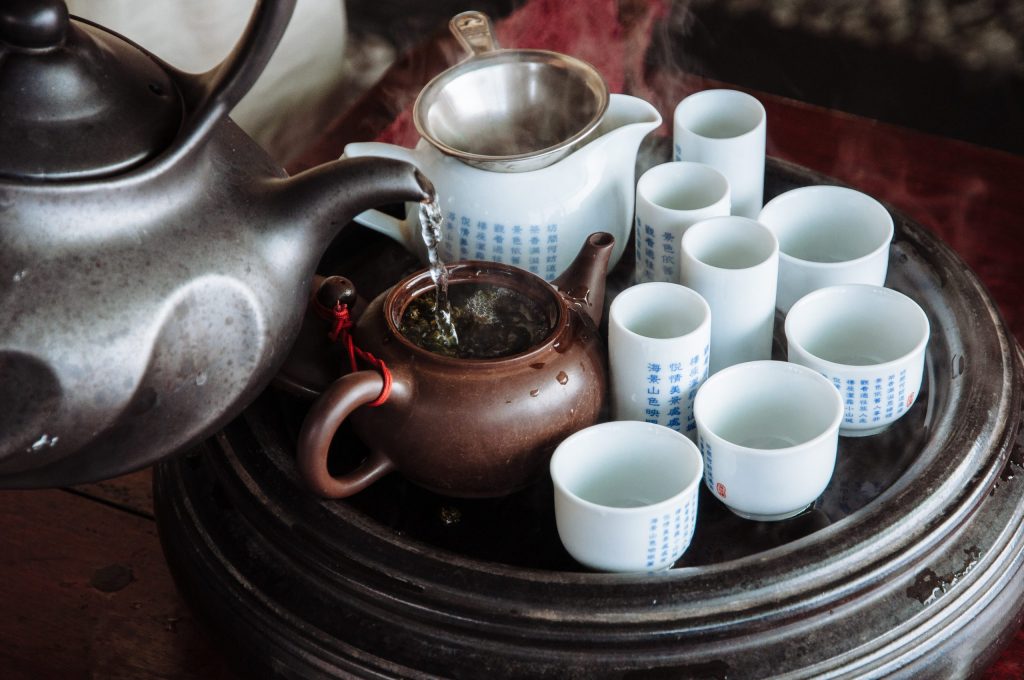 As I was at the airport getting ready to leave I wondered why it had taken me so long to visit Taiwan. I came to the conclusion that it just kept getting pushed back on the list behind other destinations. To be honest though, it’s simply because I didn’t know enough about the island, ignorant to the diversity of attractions and activities. Of course now my opinion has changed drastically. I already want to go back and take part in some secluded hiking, or stay in some of the quaint surfer townships that scream relaxation. I want to dine on stinky tofu and freshly grilled octopus. It may be a small island, but it is a beautiful one that shouldn’t be overlooked.