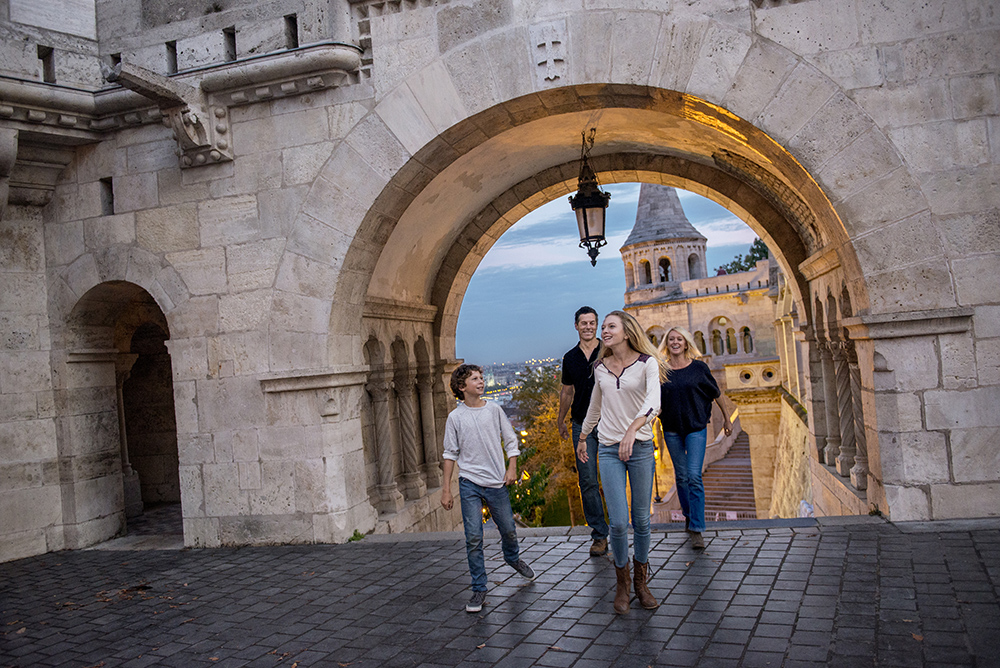 With an increasing number of USTOA tour operator members offering families exclusive pricing and family-focused on-board activities, river cruising is no longer just an adult’s vacation. These special European river cruises offer parents an alternative to large cruises and traditional land vacations. Multiple stops along the way with child-friendly experiences in history, cooking, culture and much more enhance the trip for children and their parents.

Check out some of the family experiences offered by USTOA tour operator members below or visit www.ustoa.com/dream to find your next dream vacation. 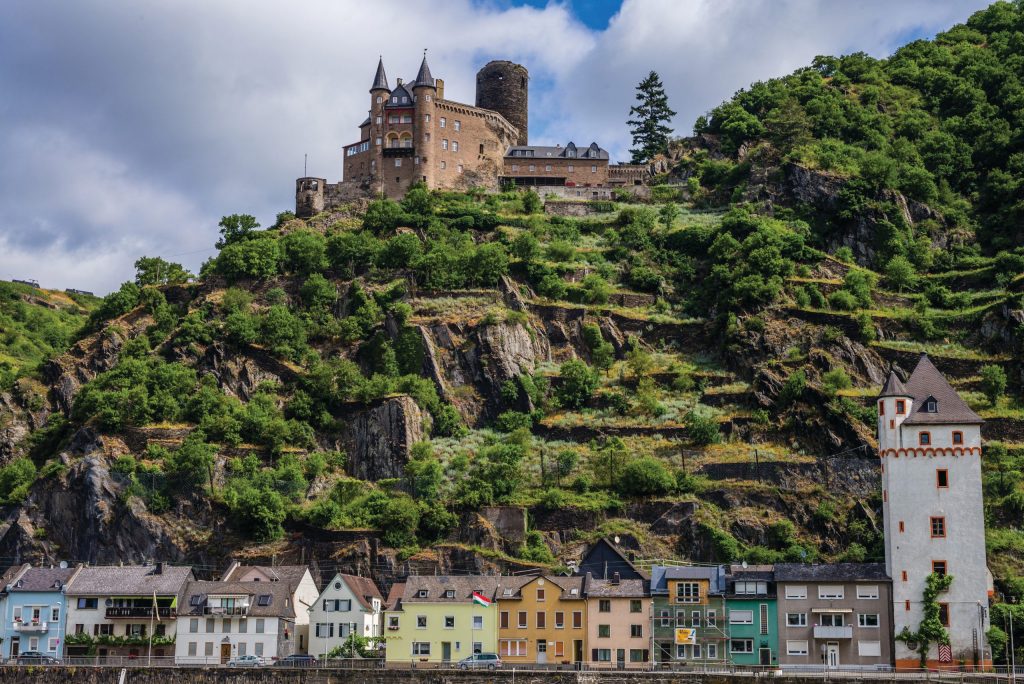 Families can take French lessons, ride bikes along the Rhine-Moselle cycling route and much more on Tauck Bridges’ “Castles on the Rhine: Family Riverboat Adventure.” The eight-day cruise down the Rhine river from Amsterdam to Basel, Switzerland, includes a ride on the world’s steepest cogwheel train to the summit of Mt. Pilatus, walking tours in Koblenz and Cologne, a canal boat cruise in Amsterdam, and a visit to the Van Gogh Museum.  All shore excursions, meals and gratuities, all onboard beverages (adult and otherwise), airport transfers, and luggage handling are included from $4,490 per person, plus airfare. This cruise is available June 27, July 4, 23 and 30, 2018. www.tauck.com 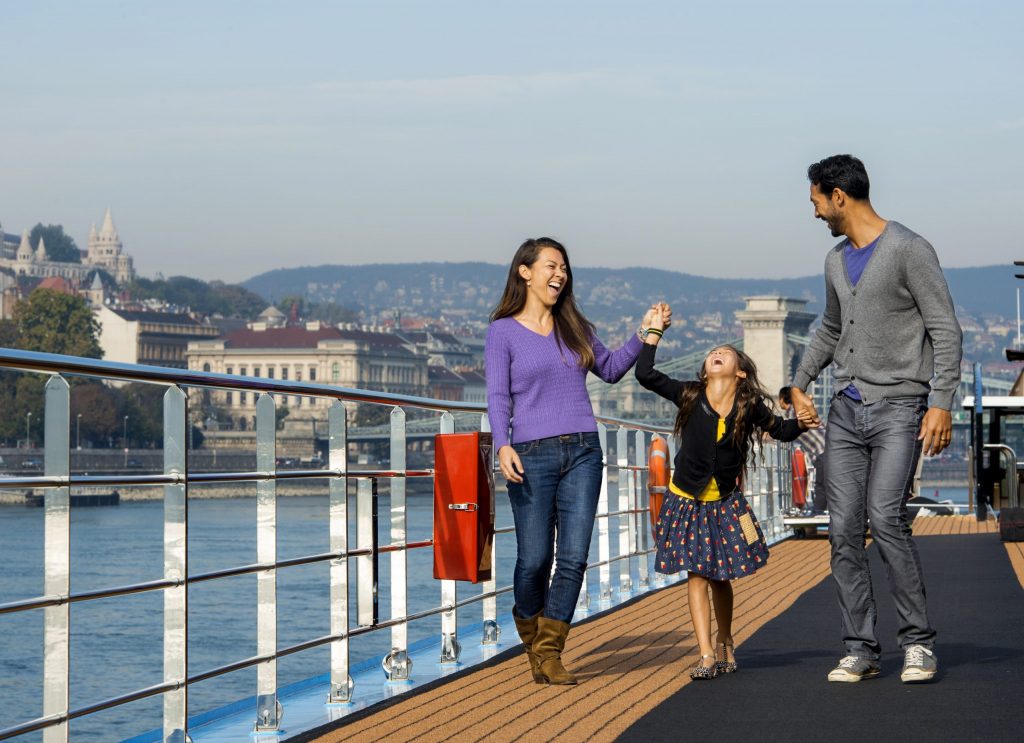 Adventures by Disney invites families to enjoy a cruise through Austria, Germany, Slovakia, and Hungary on the eight-day “Danube River Cruise.” Families can participate in a private marionette performance and strudel making demonstration at Schönbrunn Palace in Vienna, zoom down a mineshaft slide at the Salt Mines of Hallein in Austria, and test their skills at archery and other medieval activities during a visit to Devin Castle. Kids also enjoy movie nights with snacks and drinks and cultural games and traditions based on each destination. Families can get $700 off select staterooms or $350 off per person through October 20, 2017. Starting at $4,789 per person and available in June, and July 2018. www.adventuresbydisney.com

Children 16 and under sail free on CroisiEurope River Cruises’ family-focused “Family Club: Venice and its Lagoon” cruise. The itinerary features stops in Venice, Padua, Ferrara, Verona, and Burano where families have the chance to participate in walking and biking tours of various cities as well as visits to the lagoon islands of Murano and Burano. A tour of the Doge’s palace and its mysterious passageways and an optional gondola tour in Venice await passengers of this six-day European cruise. Just in time for summer break, this cruise is available for June, July, and August 2018 departures from $1,243 per person. www.croisieuroperivercruises.com

AmaWaterways welcomes families this holiday season with Christmas Markets themed cruises available on four itineraries from November 23 through December 23, 2017. Families will marvel at the fairytale-like beauty of the Danube during wintertime, sailing through Budapest and Vienna, where guests can explore up to six different markets and one of the world’s most famous Christmas Markets in Nuremberg. Guests sailing the Rhine visit bustling Christmas markets in Basel, Amsterdam and Strasbourg, as well as the quaint village markets of Riquewihr and Rüdesheim. Onboard festivities for the whole family include tree-trimming contests, gingerbread decorating, a Captain’s Christmas party, a traditional holiday dinner, carolers and more.  Prices start at $2,317 per person. Guests choosing to embark on the December 23 Rhine sailing will enjoy an AmaWaterways special holiday gift – two free nights in Amsterdam.  For more information, visit www.AmaWaterways.com.

Editor’s Note: Information was correct at time of writing. All tours/packages subject to availability. Prices may vary from time of writing, based on currency fluctuations.

When you tell people you’re going to Greenland, the reactions are impressive.  There’s a lot of wide-eyed nodding and inquisitiveness. In the weeks leading up to my trip, no one I encountered had actually ever been there before. I don’t think many people know that it’s just a quick two-hour flight from Reykjavík, but once the word is out, I have a feeling that will change quickly. 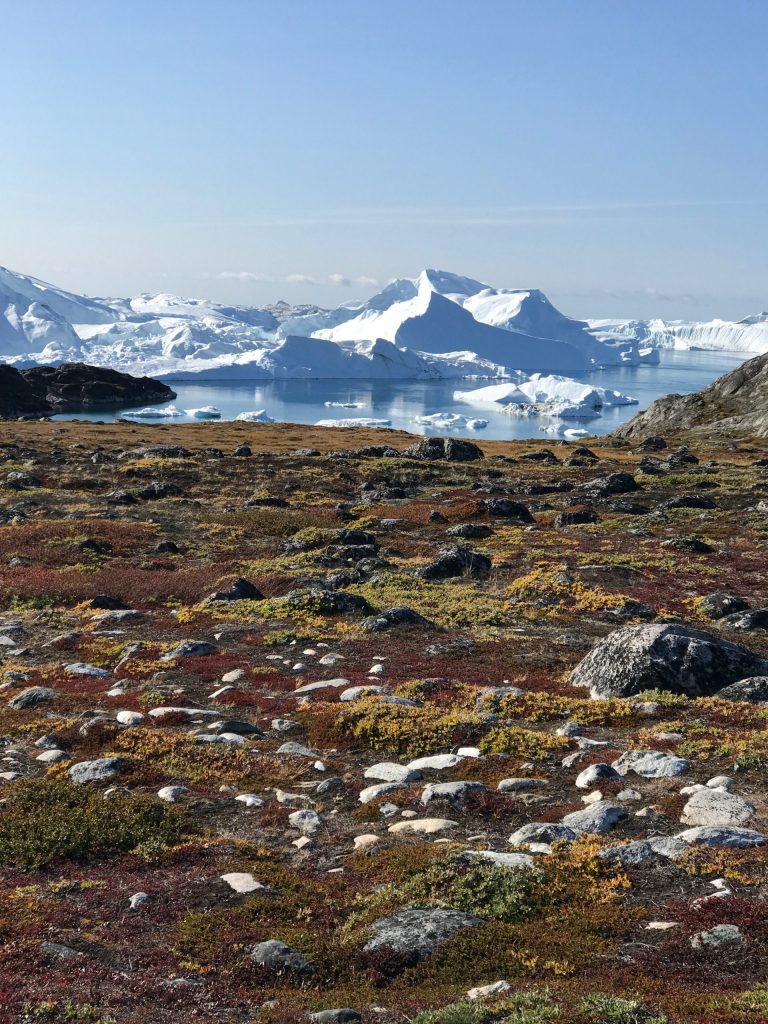 From my first glance out the plane window, I fell hard. The icy waters were turquoise and surrounded by ruddy land and patches of snow. It was a glorious site to behold. Upon landing we were shuttled to the port and then taken by zodiac to Lindblad Expeditions’ National Geographic Explorer, which we would inhabit for the next four days. The ship is a converted ferry and holds only 148 passengers. (Side note, it also offers a 24-hour Open Bridge policy, which was an incredible post-dinner activity). I immediately knew as I stepped up into the bottom of the ship that I was in for more of an adventure than a leisurely boat trip. 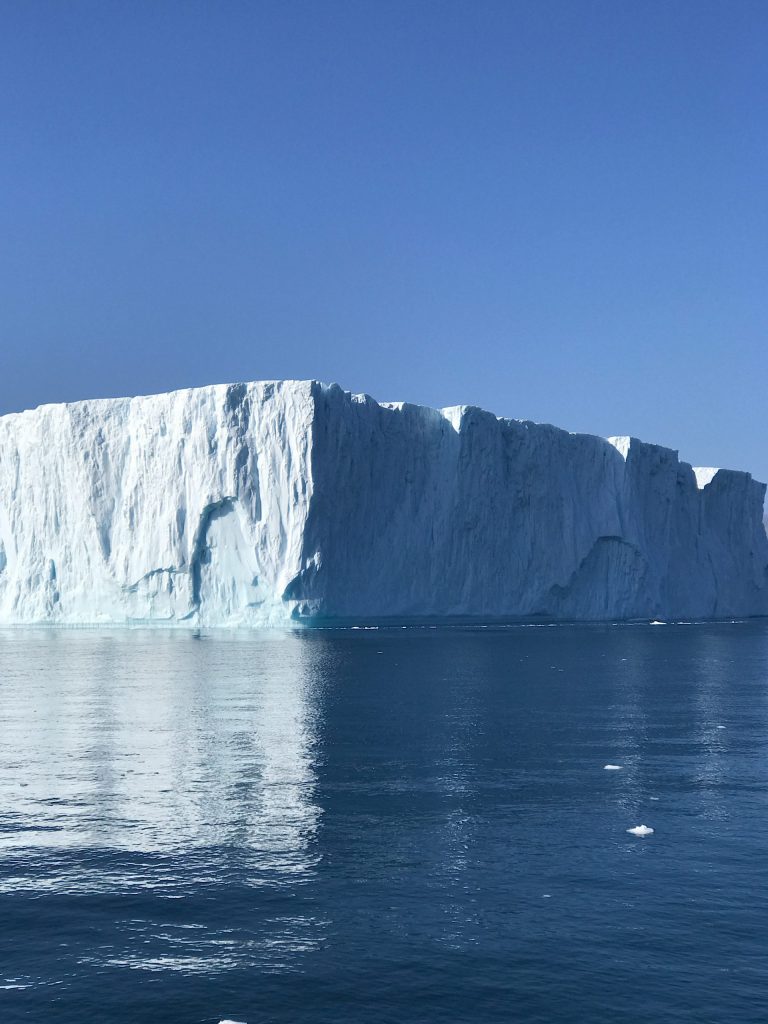 I was more than happy to learn, unlike other ships, the National Geographic Explorer is staffed with an incredible team of naturalists, undersea specialists, geologists and photographers that teach you about the Arctic – and in this case Greenland specifically.

Russ Evans, the ship’s expedition leader, kept us informed and educated about where we were and where we were going. One night, he even woke us up at 1:00 am because he caught a glimpse of the northern lights. We all showed up on deck in pajamas, no questions asked. Alas, no lights, but what a dedicated group of voyagers we were nonetheless! 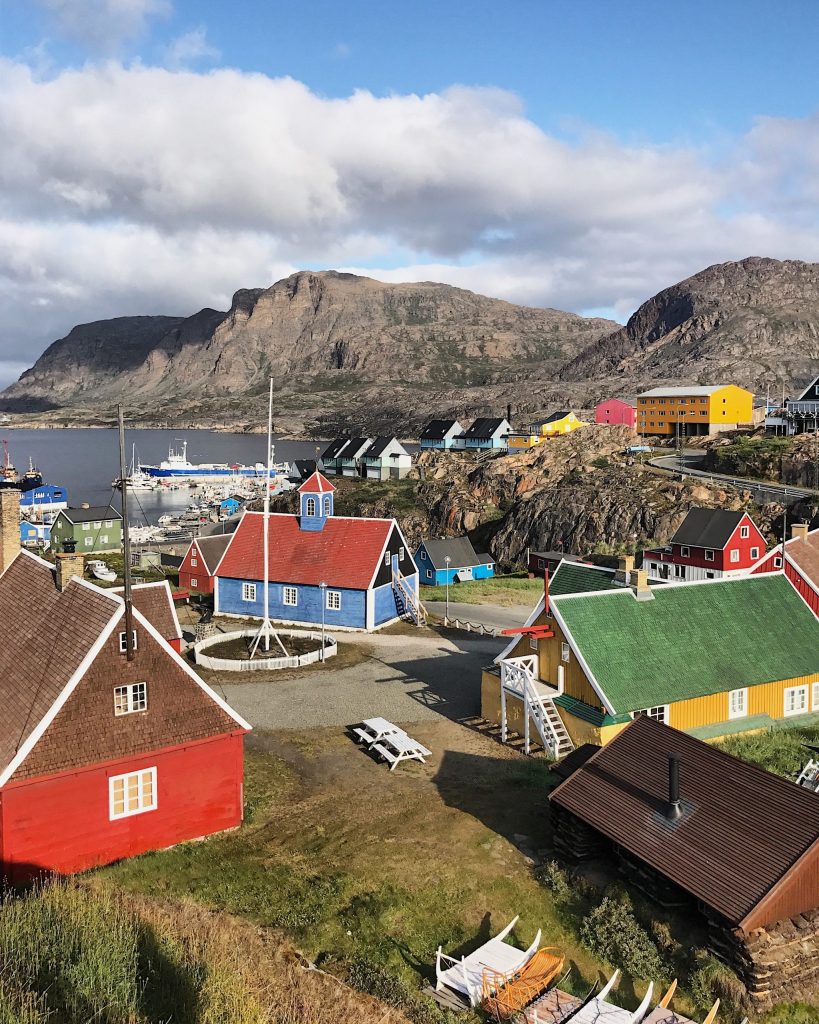 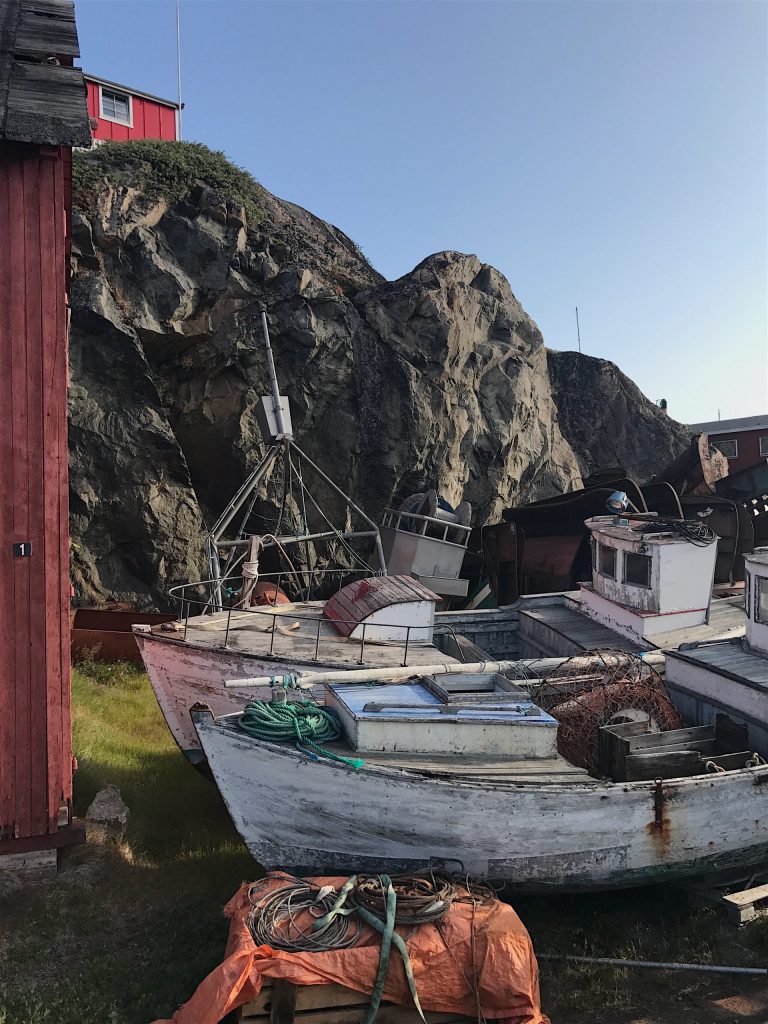 Each place in Greenland we visited was distinctly its own and equally as gorgeous. From the bright houses in the small harbor town of Sisimiut to the awe inspiring icebergs in Iluslissat, where we boated out into the frigid waters, each place we saw took my breath away and left me bewildered and more curious about our precious earth. 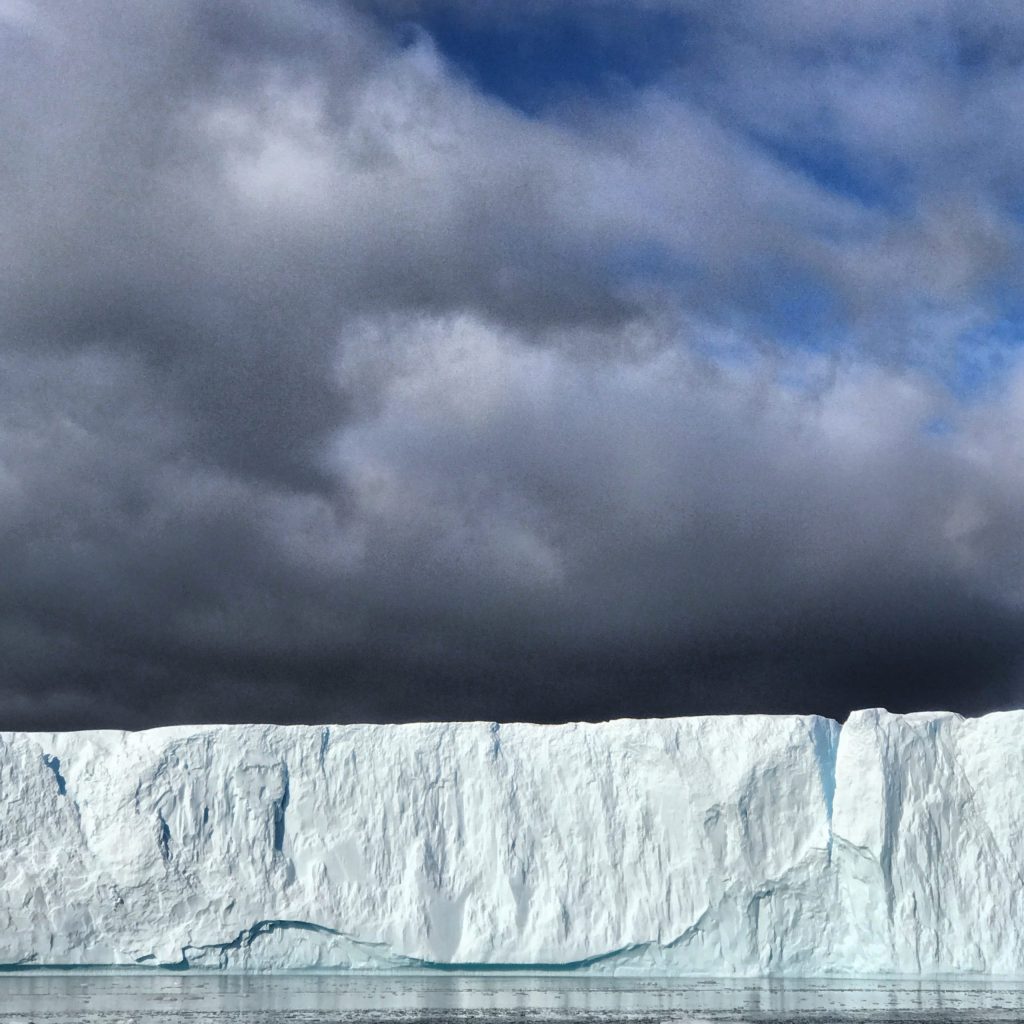 We also had the gift of having Aleqa Hammond, the former Prime Minster of Greenland, on our trip. Hearing her talk about the history and culture of Greenland’s people was educational and inspiring. With only 65,000 people inhabiting the island, Greenlandic people still hunt for most of their food, which includes seals, whales, polar bears, and of course fish. No land hunting on motorized vehicles is allowed, which I found not only ethical, but incredibly impressive. She also spoke passionately, but optimistically about global warming and how the country is working to learn how to adapt and problem solve what lies ahead. 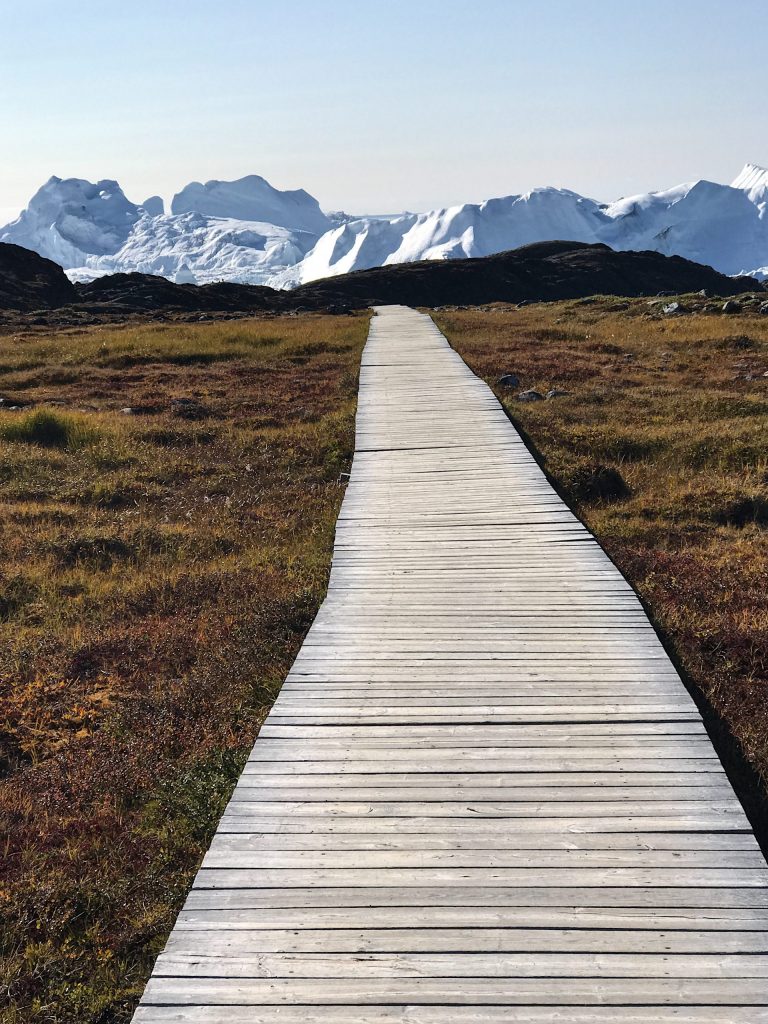 If you had asked me before I left if I’d walk away from this trip yearning for Artic hikes, undersea diving recaps and talks from naturalist, I would have politely dismissed you. I’m ever so happy to be proven wrong.  Greenland, really hope to see you soon.

Interested in learning more about Colu’s journey? Read more about it on AFAR.com the USTOA blog and check out Lindblad Expeditions’ Hot Springs and Icebergs: Iceland to West Greenland tour.

Colu is a food and lifestyle expert, native New Yorker, and avid home cook. Most recently, she worked as Director of Special Projects at Bon Appetit. Her writing has appeared in publications such as Refinery29, Cherry Bombe, and Wine Enthusiast. Her cookbook Back Pocket Pasta will be released by Clarkson Pottering in February 2017.