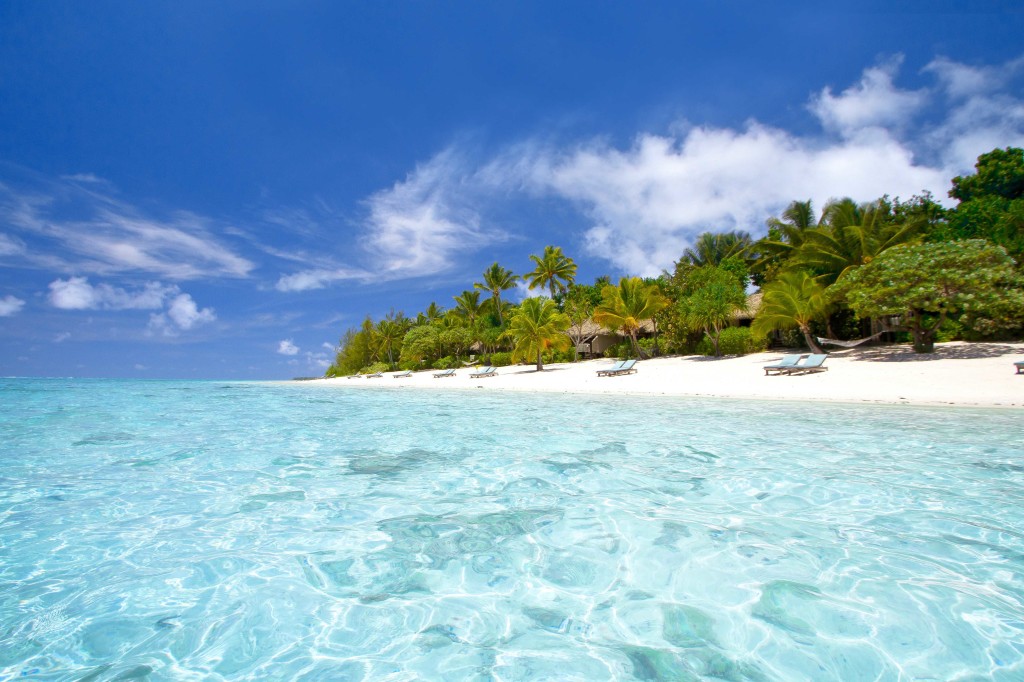 Which tropical paradise is on your bucket list…Hawaii, Tahiti, or perhaps Fiji? While all these destinations offer sun, sand, and relaxation, for a truly off-the-beaten-path experience consider the Cook Islands.  Located in the South Pacific Ocean northeast of New Zealand, the Cook Islands, comprised of 15 major islands spread over nearly 850,000 square miles, offer crystal clear lagoons and enchanting Polynesian culture, and are easily accessible with nonstop flights from Los Angeles to Rarotonga.

Several members of the United States Tour Operators Association (USTOA) offer five to 15-day tour independent itineraries to the Cook Islands. Each of the following provide travelers with peace of mind knowing all the planning details have been taken care of and with the flexibility to go at their own pace. 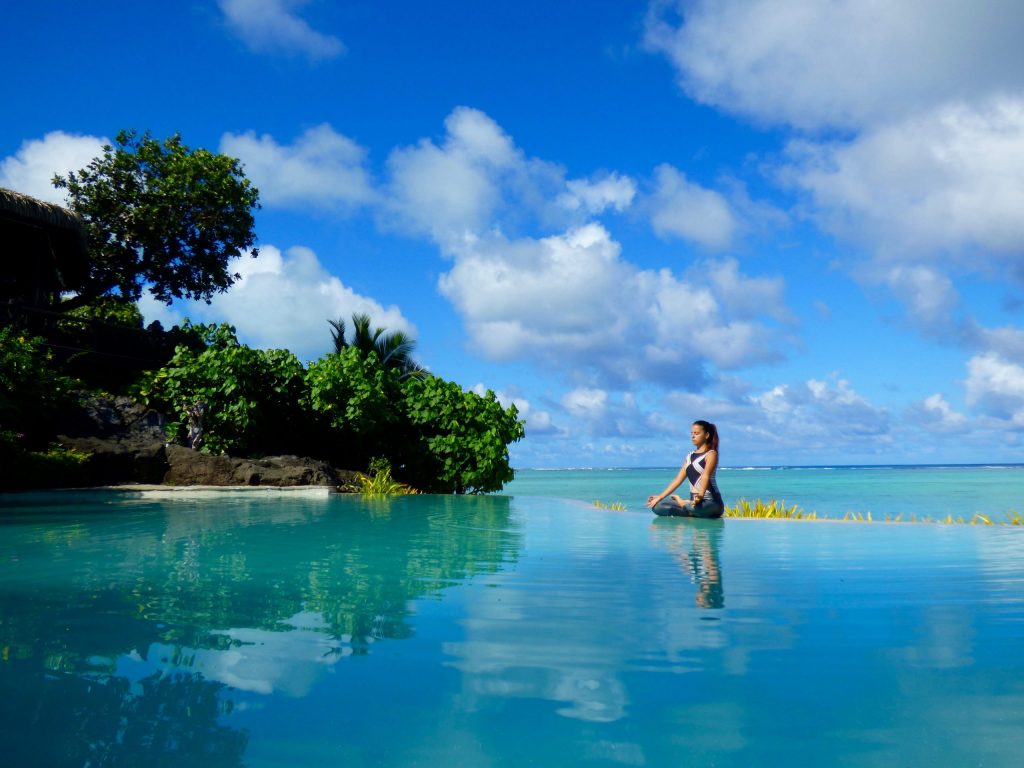 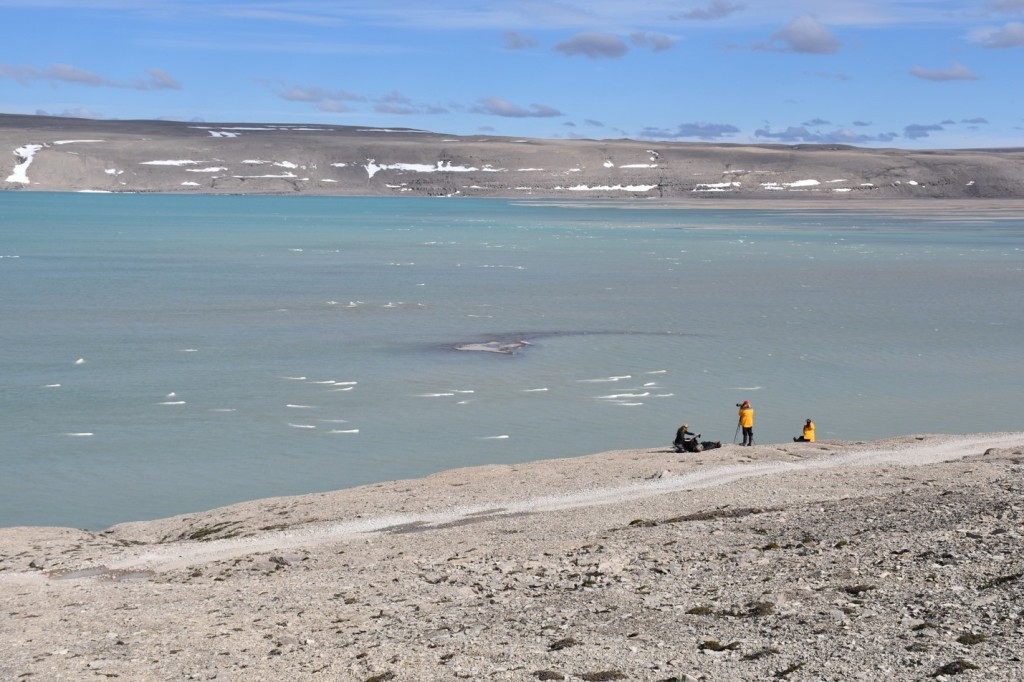 Every year, thousands of travelers head to Africa in the hope of seeing the famous “Big Five” animals—lion, leopard, rhinoceros, elephant, and Cape buffalo—during a stay at one of the continent’s safari camps. Far fewer, only a couple of hundred each summer, travel to Somerset Island, with the goal of spotting the wildlife there. Few places in the world are more remote than Somerset Island, located in Canada’s newest province, Nunavut, carved out from the Northwest Territories in 1999. When I was offered the opportunity to travel there and stay at the Artic Watch Wilderness Lodge on a trip with Quark Expeditions, I knew it was one I couldn’t pass up.

My last trip to the far north of Canada was in 2016, to northern Manitoba, and while I was there I picked up a copy of Barry Lopez’s Arctic Dreams, which I’d recommend to anyone interested in the flora, fauna, and people who live at the edge of the world. Ever since finishing it, I was determined to see the Arctic—and with Lopez’s appreciation for how even the most apparently desolate landscapes are teeming with life, if you learn how to look with a different perspective. Now I would have a chance to travel 500 miles beyond the Arctic Circle, far past the end of the tree line and where the midnight sun doesn’t set from the end of May until the middle of August.

Coming up with a Big Five for Somerset Island is a challenge—there are only three animals that are truly big: beluga whales, polar bears, and musk oxen. My safari check list would be rounded out by some smaller species too: arctic foxes, hares, and lemmings.

My journey to the Arctic Watch Wilderness Lodge required a stop in Yellowknife, where I saw the animals of the Arctic in taxidermy states at the Prince of Wales Northern Heritage Centre. The following day, our group of 23 travelers flew just over three hours north of Yellowknife, to a landing strip on uninhabited though immense (it measures some 9,500 square miles) Somerset Island. 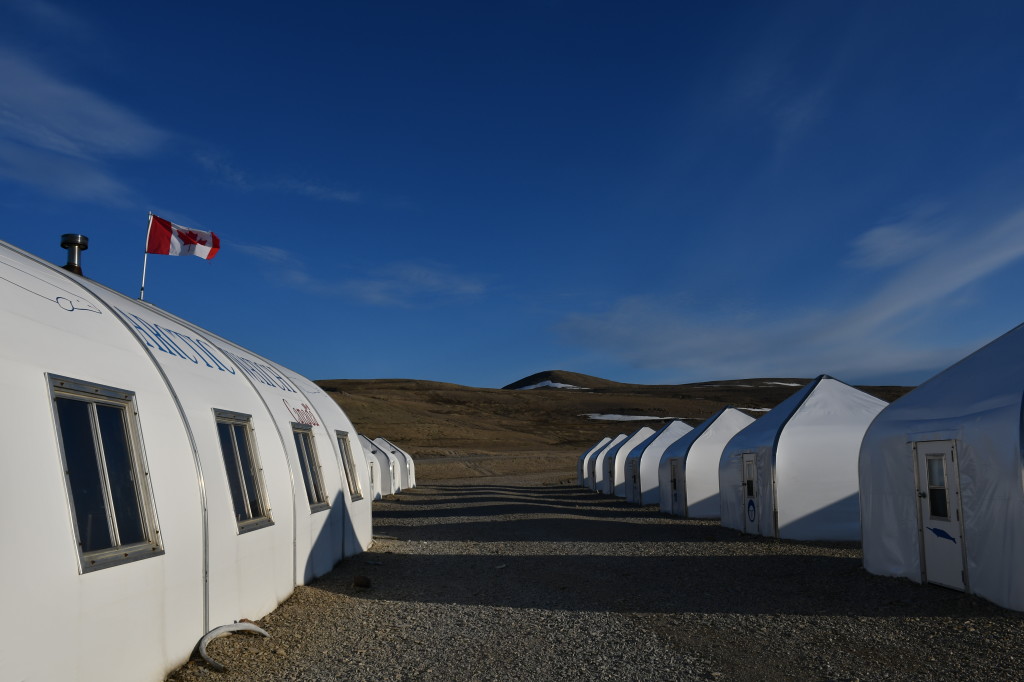 Our Arctic safari camp consisted of two rows of guest tents, a main tent where we gathered each morning and evening, and another tent for dining. Every morning we chose from different expeditions, and my focus was on the wildlife. On the first day, I headed out with a group of ten to Polar Bear Point, where our guides were able to spot a tiny white dot on the horizon—a polar bear. Despite the name of the point, it’s not teeming with polar bears. We got within 100 meters or so of the young male polar bear thanks to a quick lesson from our Quebecois guide on how to keep low and approach it as a compact group. Once the bear heard us, he stood up on two legs, sniffed in our direction, rolled on his back, and then wandered away. One down. 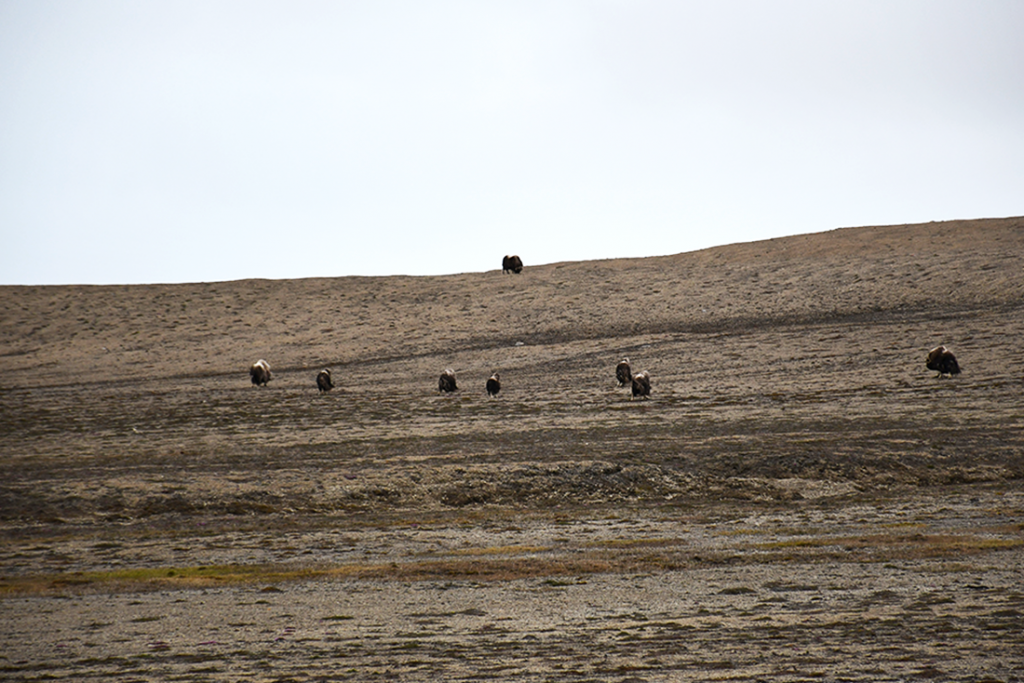 If Polar Bear Point is an obvious place to look for polar bears, then Muskox Ridge seems like a logical place to search for muskoxen, one of the iconic animals of the Arctic. Though the beasts are skittish, our group that day was led by Tessum Weber, the son of Richard Weber and Josée Auclair, the owners of the lodge. Having spent his childhood summers on Somerset Island, he brings decades of experience to the challenge of approaching muskoxen, and we got close enough to see one stand up on a small hill, in a Lion King like moment, before it continued on its way.

The belugas were both the easiest animals to spot and the most impressive. Each year some 2,000 gather in Cunningham Inlet once the ice breaks. On our third day at the camp, the sun was shining and temperatures in the low 60s, and the belugas seemed to be enjoying the pleasant weather as much as we were. Hundreds of white dots filled much of Cunningham Inlet, and whether sitting on the shore hearing their chirps or kayaking alongside, the sight was breathtaking. 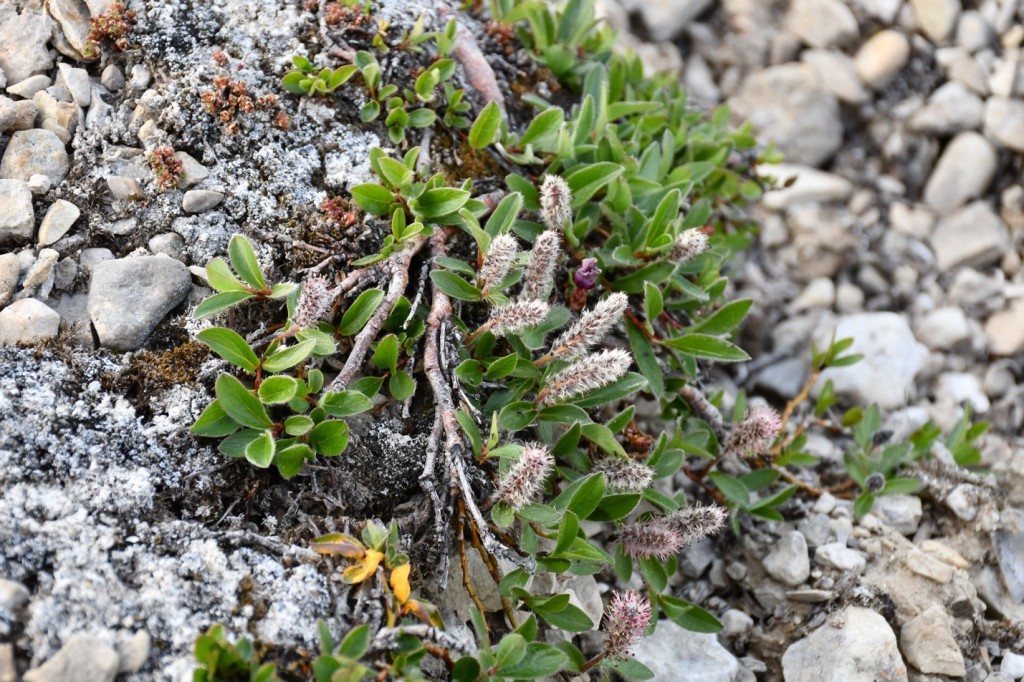 Even when they centuries old, arctic willows grow low to the ground.

While much of my focus was on the animals of the island, the flora is fascinating as well. Exploring Somerset Island was like walking through the early chapters of my botany textbook. It is a landscape of mosses and lichens, the most primitive plants, while other species reflect unique adaptations to the Arctic conditions. Arctic willows that were a hundred years old were still only an inch tall, with no need to grow above other plants competing for sunlight. 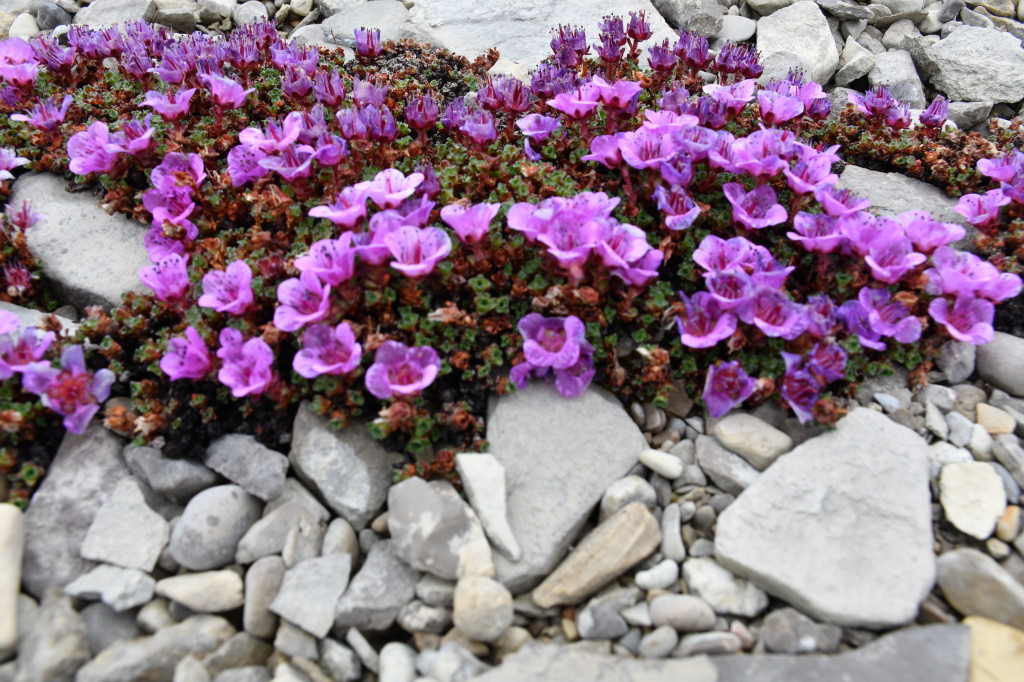 Back on my pursuit of the animals on my Arctic checklist, Tessum also took us to two fox dens, where young pups were playing. With the foxes we had to maintain a significant distance and could only watch them through binoculars—a reminder that not every moment needs to be recorded on Instagram. On my last full day on the island, a hare hopped up just a few meters from me before darting off up a hillside. All that remained was the elusive lemming, and despite the guides looking in every lemming hole, I had to leave without seeing one. My exploration of the Arctic isn’t over yet.

John has almost 20 years’ experience in travel, both on staff at Conde Nast Traveler and Travel + Leisure and writing for other magazines, newspapers, and websites. He is AFAR’s Branded Content Advisor and the founder of Signal Custom Content, a travel branded content consulting company. In addition to his trip to Nunavut, his 2018 travel plans include Austria, El Salvador, Guanajuato in Mexico, Hungary, Vancouver, and Vietnam.

During this year’s Travel Together Month, the members of the United States Tour Operators Association (USTOA) are putting the world on sale with nearly 100 offers on bucket list trips to all seven continents.

The month long celebration showcases offers like free airfare, direct savings, and complimentary add-ons from the country’s leading travel companies. Book by September 30, 2018 to take advantage of these exclusive offers and make your dream vacation a reality. 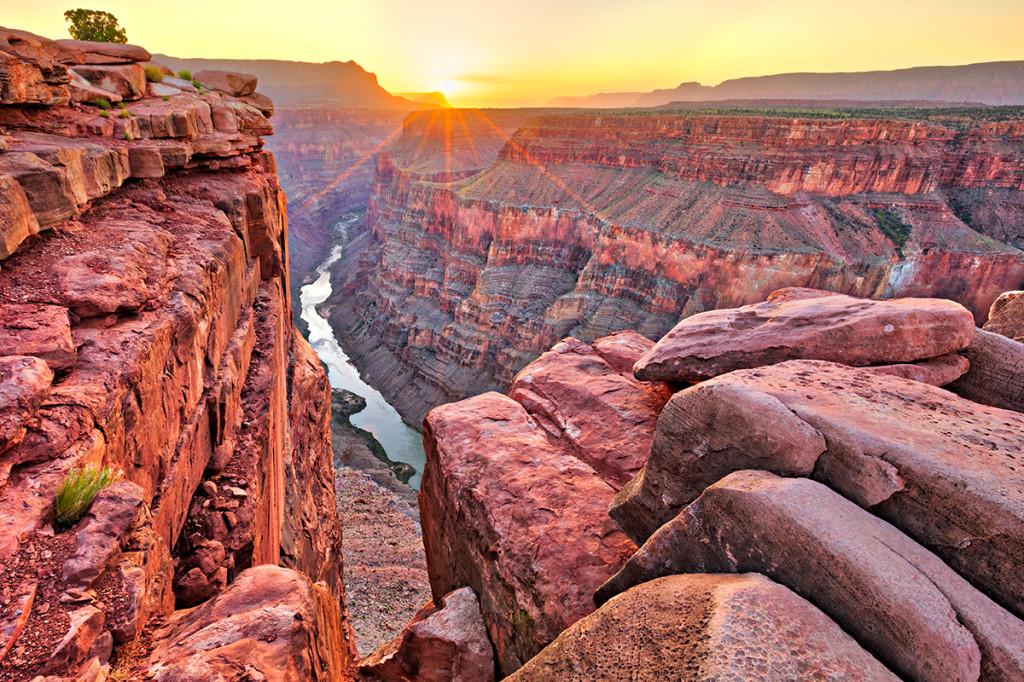 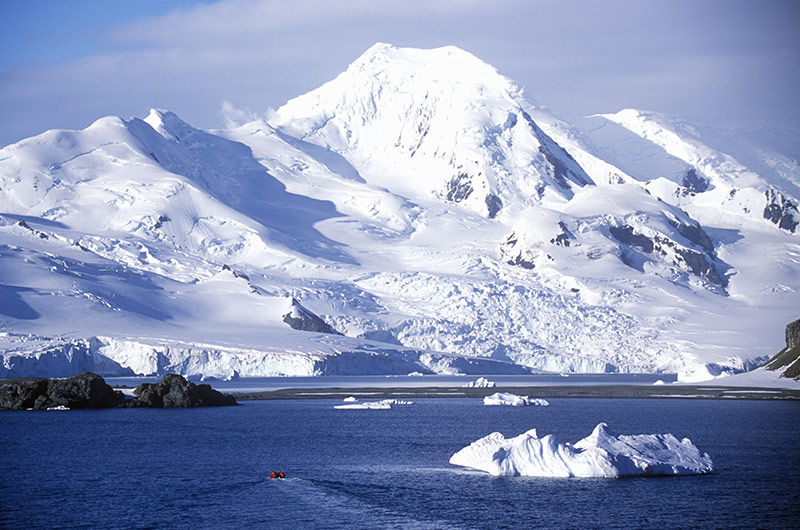 And for our travel advisor partners, there are special bonus commission opportunities and savings for you this month as well. For more, visit www.ustoa.com/travel-together-month-agents to see all the travel advisor offers.

Note: offers can be booked September 1-30, 2018. All travel deals, restrictions and booking instructions can be found at www.ustoa.com/travel-together-month.

For further inspirations or to search for dream travel itineraries and destinations, visit www.ustoa.com/dream.