When I learned I would be going to Brazil with EMBRATUR and LATAM as part of AFAR’s partnership with USTOA, I was extremely excited yet a little concerned as my knowledge of the country was limited. Almost everything I knew came from a high school friend who had emigrated from Brazil to the United States when he was fairly young.

I learned my group and I would be spending the majority of the time in the state of Bahia, a place I would soon come to know as a beautiful, flamboyant mixture of culture and excitement with charismatic people and intoxicating landscapes. We would start the journey in the state’s capital (and third largest city in Brazil), Salvador, one of the oldest colonial cities in the Americas, then head to the less populated pastures of Brazil’s Chapada Diamantina National Park which is an enormous area full of caves, grottos and rough terrain conducive to exploring. 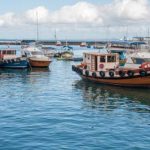 Colorful boats near the Bahia Marina 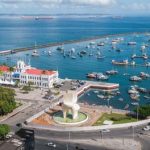 Looking towards the Bahia Marina

Salvador is a historically rich and vibrant city that dates back to the 1500s and is often referred to as “Brazil’s Capital of Happiness.” Simply walking around Salvador’s Pelourinho (Historic Center) neighborhood provides a clear sense of this happiness. The buildings were seemingly painted by a coalition of ornery toddlers all trying to out-do each other, one building’s color more outlandish than the next. The neighborhood has an interesting mix of architecture and landscapes that keep you on your toes; the scenery is as random as the town’s paint choices. We made our way through the cobblestone streets of the Pelourinho neighborhood, weaving our way through the constant concrete rainbow. We took the iconic, Art-Deco Lacerda Elevator to Salvador’s commercial district on the waterfront, and after taking a few photos of the beautiful harbor, walked through the Mercado Modelo, a market with numerous vendors selling everything from flavored Cachaca (popular sugar cane alcohol used to make Caipirinhas) to vibrant, textural paintings created by local artists.

The next order of business was to re-fuel, so we headed to the most popular snack stall in the city to dine on acaraje, a bun made from ground white beans, deep-fried, split in half and stuffed with various toppings. The food stand was a hive of activity, especially around the preparation counters where customers in the queue were placing and customizing their orders to go. We were greeted by the restaurant’s owner, who simultaneously took orders while explaining acaraje to us. She was unfazed by the chaotic atmosphere and had an ever-present glow on her face while mentally tallying order totals. She led me over toward a huge vat of bubbling oil that smelled rich and nutty and placed a few buns into the oil. The aroma was magnificent and after a few seconds the golden brown morsels were retrieved, blotted, and then placed in a small serving basket. They were then sent to be topped and after eyeballing a few options, I went with the one that seemed to be most popular with the locals – finely chopped tomatoes and peppers, whole cooked shrimp and a spicy pepper-based sauce. The result was wonderfully satisfying, and oddly enough, it reminded me of a hush-puppy stuffed with incredibly fresh shellfish and vegetables. 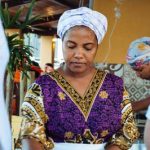 Ordering some acaraje in Salvador 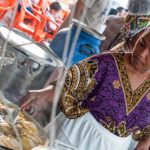 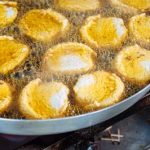 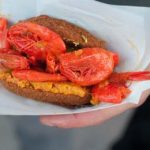 Acaraje with all the toppings!

That evening, we sat in on a capoeira demonstration at a private academy. Our local guide, Rodrigo, had been training with the academy for a few days prior to our arrival, so we had an instant connection with the soulful practitioners. We met the master who quickly showed his physical prowess. As the group began doing their warm-up routine, he showed his extreme dexterity, at times balancing on his hands for unreasonable periods of time! The room became a furnace of collective body heat as the athletes rolled, jumped and walked about on their hands, using every inch of the provided space. (A few times I had to move my camera back for fear of it catching an errant foot!) 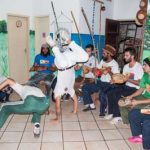 The capoeira performance in Salvador 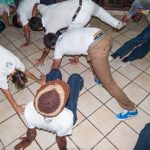 The controlled chaos of a capoeira warm-up 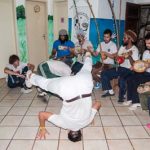 The capoeira performance in Salvador

Once the warm-up was complete, the “sparring” portion of capoeira began. Several of the students took their places in the corner of the room; one behind a large drum, the others with a percussion instrument known as a berimbau. Like a well-orchestrated ensemble, the members began filling the room with the distinct sound of the berimbau, followed by a djembe-deep bass line. As soon as the group started in with their chanting, goose bumps surfaced on my skin. The athletes began moving in an elegant yet primal way: a backwards handstand suddenly turning into a high kick, one contestant sliding backward through an opponent’s legs. It was truly a memorable moment even though I wasn’t a member of the group; the collective feeling of comraderie embraced everyone in the room.

The following morning our group left Salvador and headed to tranquil and scenic Lençóis, a quiet town on the edge of the enormous Chapada Diamantina National Park, which serves as one (if not the major) hub for exploring the park. Lençóis would be our home for the next three days, and with its immediate appeal, that was fine by all of us.

The town spreads from a river basin up into the hills, bisected by the flowing river. There were more people on foot than in cars, random dogs barking and kids playing soccer. We stopped for acai and as time passed, surrounding restaurant owners began pulling out tables and chairs while musicians and performers set up in the streets. Soon the city of Lençóis would take on another persona— that of a socialite who enjoys Caipirinhas and can strum a mean folk song, the gayety infectious. 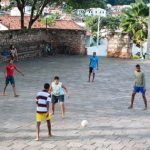 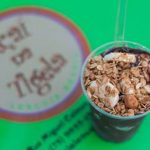 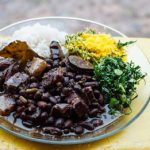 A tasty plate of Brazilian feijoada 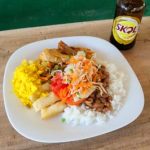 A satisfying Brazilan meal with rice, beans, chicken, and vegetables

Just after sunrise the following morning, I woke up as the surrounding hills were still shedding their morning mist. In the parking lot, our driver awaited the group next to an old, army-green Toyota 4X4 playing some 90s’ rock and wearing a grin on his face. The ride that day was great: scenic off-roading with stops at the large and violently flowing Primavera Waterfall and the pristine blue-tinted water of Poco Azul. 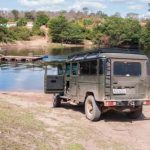 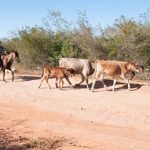 One of many ranch scenes in Chapada Diamantina 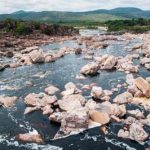 For me, the highlight was the Poco Encantado, or Enchanted Pool. At first I was curious what I had gotten myself into as I was outfitted with a helmet and head lamp, but as we ascended into the earth, I was pleased to learn that we would not be spelunking too far before reaching the viewing area. We had to reach the pool at a certain time in order for the sunlight to pour into the cave and shine into the pool, causing it to omit a bluish hue. The combination of the sun hitting the unique, mineral-laden water plus the pools’ reflection of the top of the cave created one interesting optical illusion, making it tough to discern how deep the pool actually was and what contents lay beneath its surface. 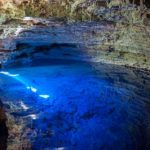 The beautiful ambiance of the Poco Encantado 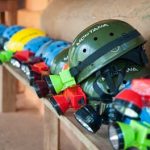 The next day we traversed more of Chapada Diamantina National Park, swam at the Pratinha e Gruta Azul and explored the nearby Poco do Diabo. Towards the end of the day, we made our way up into the mountains to view the sunset from atop Pai Inacio Hill. There were roughly 30 other hikers, everyone taking in the incredibly vivid pastel colors provided by the ascending sun and trying to keep warm in the face of a very strong wind. Chapada Diamantina National Park had some truly stunning geography but seeing these mesa-like mounds amid the vast valley was something I was not expecting. Surprises like these are what make traveling extraordinary. 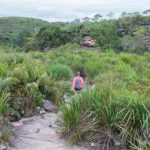 Hiking near Poco do Diabo 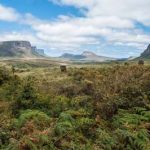 One of the classic views within Chapada Diamantina 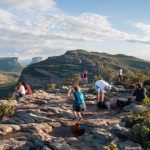 Taking in the unique topography of Chapada Diamantina 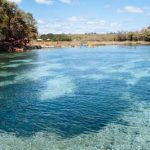 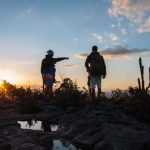 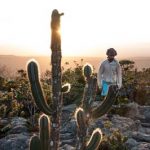 Sunset on Pai Inacio Hill is a Bahia must

Bahia is an incredibly diverse region of Brazil and one that often gets overlooked by tourists. If you’re looking for an adventure outside of the bustling cities of Central and Southern Brazil, I highly recommend a trip to Lençóis and some time in Chapada Diamantina National Park. For other great travel recommendations from like-minded travelers and adventure seekers, visit www.adventure.com.

Colin Roohan is a travel photographer interested in documenting experiences with culture and life. In addition to his work with AFAR, Colin has been published in Travel + Leisure, The Royal Geographical Society’s Hidden Journeys, and Groove Magazine, amongst others. In addition to journalistic pursuits, Colin captures portraits and documents events around Southern California. Hear more about his journey to Brazil at AFAR.com.