The ground was soft and wet with little puddles of muddy water mixed with fish guts, scales, blood and who knows what else.  This wasn’t a good day to be wearing flip-flops.  All of my senses were on high alert while traversing Bazurto Market. It was sensory overload and I felt like a kid in a candy store – bursting with excitement and attention deficit disorder every place I looked.  However, instead of being excited about pixie sticks and gumballs, in a twisted way I was excited about piles of intestines and pig heads.  It was a serious market, the kind where you get a glimpse into local food, eating culture, work habits, and traditions in an extremely ‘Bourdain Parts Unknown’ sort of way.  This is the stuff that’s normally kept far away from most American’s eyesight, the stuff that happens before that lovely piece of prime rib or fish fillet ends up behind the glass in the grocery market case.  And I absolutely loved it.

Crashing through the din of background salsa music was a loud pounding noise.  I panned around until I found the source; a middle age woman with a hair bonnet had her arm raised in the air holding a wooden club ready for her downward motion.  Bam! The club slams down onto the top of a knife driving it into the belly of a large fish.  This motion was repeated over and over until the fish was scored into 1 inch strips.  She suddenly put down the club and reached her arm, plastered in fish scales, across her body and grabbed a ½ bottle of open beer.  In one swift fluid motion she picked up the beer and chugged the remainder of the bottle slamming the empty down on the table with the same force she used with the wooden club.  She wiped her mouth with the back of her arm, picked up her instruments again and moved on to the next fish. 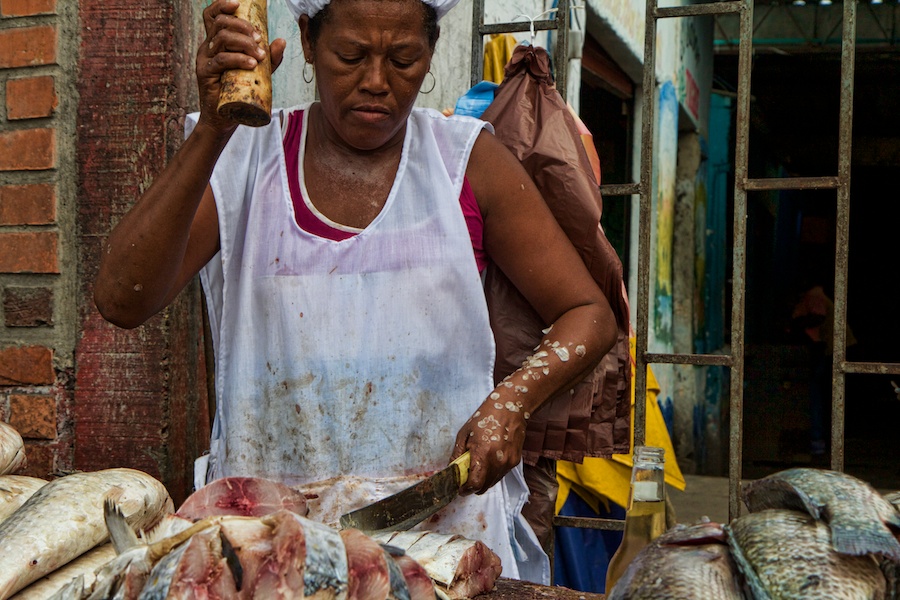 I stood there speechless and giddy.  This was the real Cartagena in front of me.

When I told Ruth, a local friend, that we were going to Bazurto Market she was immediately worried.  She went through all of the normal warnings; watch out for pick pockets, don’t flash around your camera or cell phone, and be careful.  However, I knew what this really meant was the market was a place where few tourists go, which actually made me more excited than fearful.  I wasn’t too worried as we were going with locals, our guide Eduardo as well as Chef Javier as part of an experience offered by Avanti Destinations. 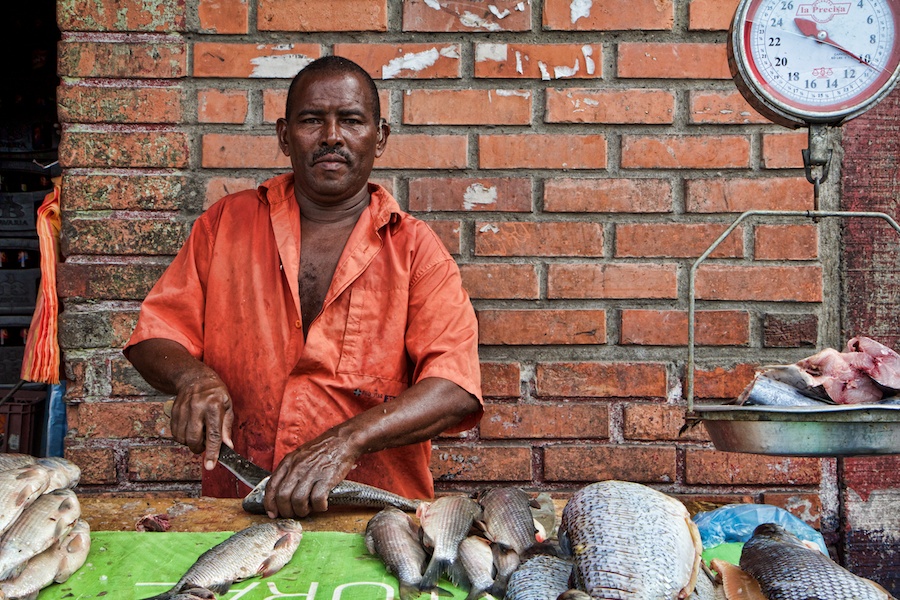 Chef Javier led us through the market greeting and hugging old friends, inspecting vegetables, talking to vendors, and pointing out various items that were new to us.  The market was partially outdoor and partially enclosed.  It was a maze of little alleys and tables.  As you walked around and observed the people working there, you could tell the relationships ran deep.  Vendors joked among their neighbors, and it was often a family affair as kids helped their fathers butcher and sell.

We started in the fish areas, but then moved further back into the main part of the market where the meat butchers were located.  Men with giant bellies and even bigger smiles were outfitted in plastic aprons covered in blood, happily carving away on big wooden stumps.   Warning: this section of the market isn’t for everyone but if you decide to wander through be prepared to see extremely raw visuals of animal parts. It was super to have Eduardo and Chef Javier with us to answer the inevitable questions of, “What is THAT? And what is it used for?”  We learned of soups, and various other dishes I had never heard of before, nor did I know if I’d be brave enough to try them myself. 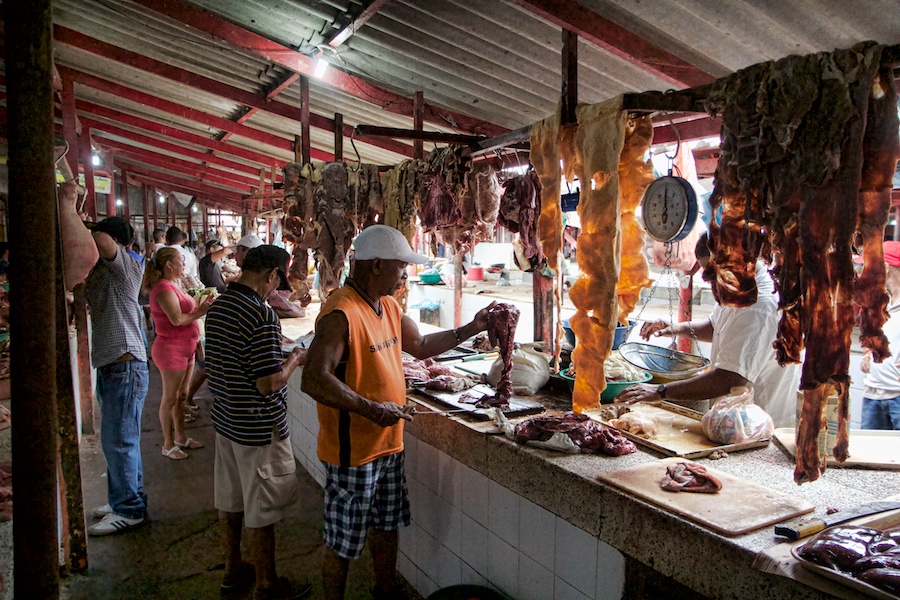 Next we found ourselves in the vegetable section of the market.  You could tell the avocados were in season as there were carts and carts of them in various sizes.   Chef Javier sorted through the stack to find the perfect one for our ceviche he was planning for us.  After all of this walking around I was starting to get hungry.

Luckily for my stomach we finished up in the prepared food section of the market where large metal pots balanced on stands precariously filled to the brim with soup, rice, and seafood.  Tables lined with newspaper had stacks of freshly fried fish on them.   Eduardo saw me looking inquisitively at the various fried foods and soon he was handing me a piece of oily newspaper with a freshly fried ball of something, a lime wedge, and cooked yucca. I eagerly bit into the fried food.  It was salty and crispy and had a fishy taste – delicious.  However I decided it best I inquire about what I was eating once I was actually done eating it.  I had spent too much time in the market that morning seeing every (and I mean every) part of an animal that I decided sometimes it’s best to not know what you are eating. 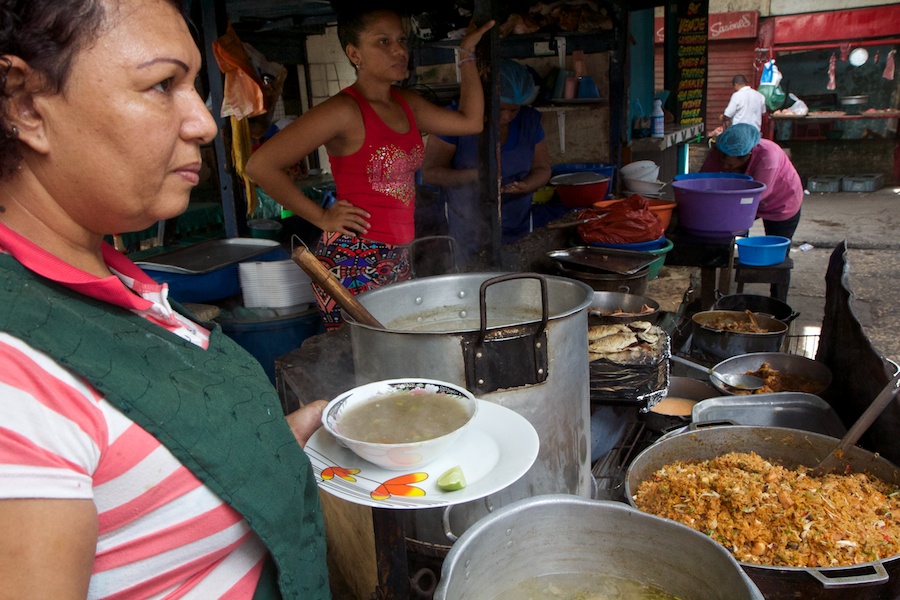 Prepared Food in the Market 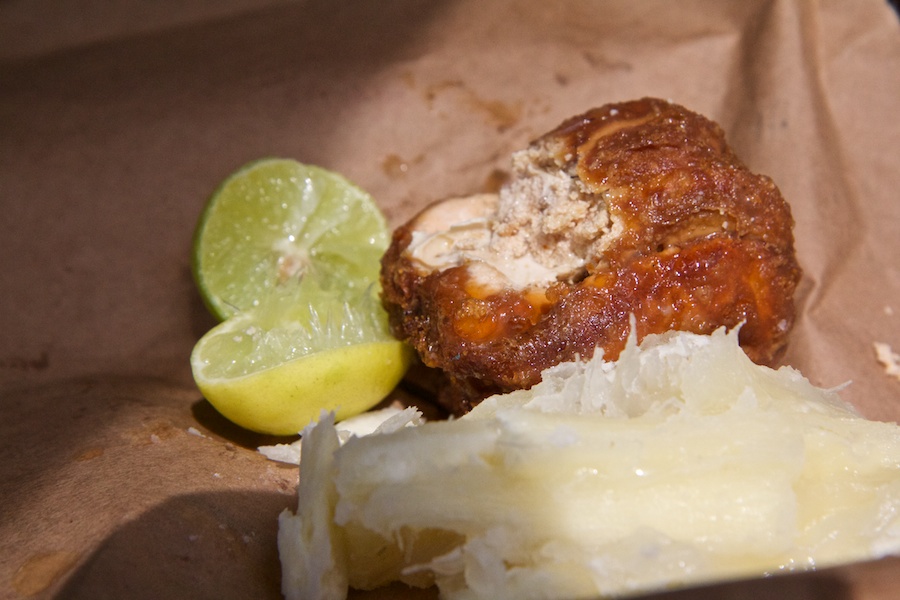 We left the sounds of the market behind and headed out of town towards the tiny beach community of Manzanillo.  Perched right on the beach is Khosamui Hotel, where Chef Javier works his seafood culinary magic.  The vibe was completely different from the bustling market. A big open-air lobby was filled with colorful flowers and throw pillows. The upstairs patio overlooked the beach and came with a fabulous and constant sea breeze to gently rock your hammock back and forth; providing the perfect place for a lazy nap while lunch was prepared. 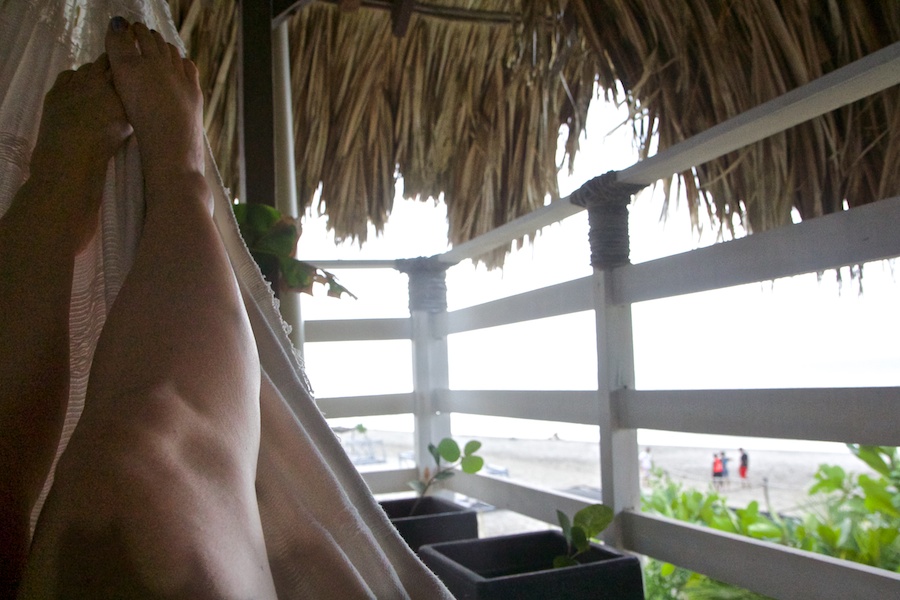 I was awoken from my nap with the sounds of salsa music and someone offering me a cold beer.  Eduardo beckoned me downstairs where lunch was ready.  Chef Javier paraded out fresh colorful plates of seafood.  It was hard to reconcile that these lovely culinary creations came from the gritty market environment we were in a few hours ago.  Proving that it’s not how it starts, but how it ends on your plate that is important.   Some tourists might think the Bazurto market is a bit too much local insight, but it’s real, and it’s where the food in Cartagena comes from.   I adored my opportunity to see past the tourist veneer; it may not be pretty, but it’s a real local experience. 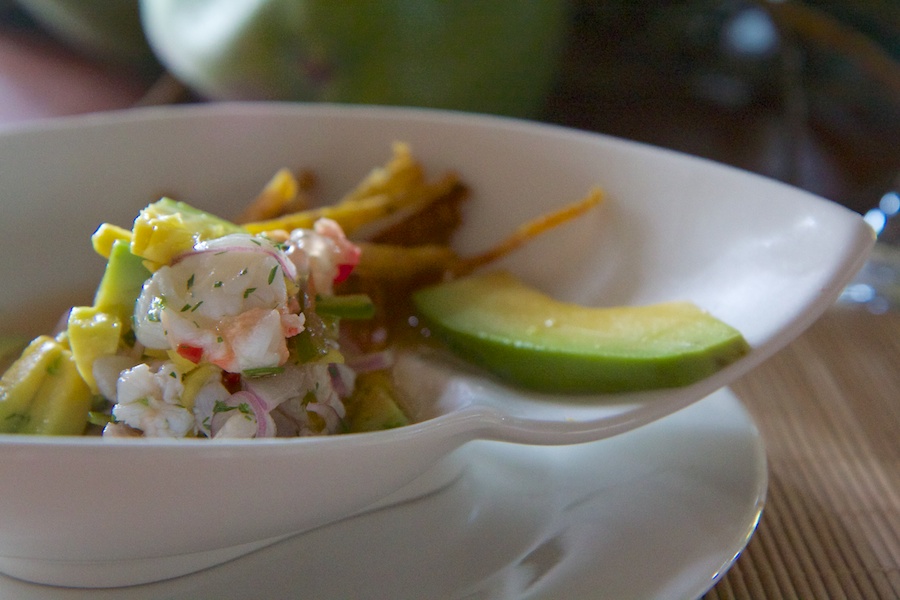 And if you don’t think you can take the ‘real-ness’ of it, then no problem, simply enjoy what’s on your plate.  Sometimes it’s easier to just enjoy the food and not know all the gory details.

Oh yes, and the fried food Eduardo gave me to try in the market?  Well, I learned later it was fish testicles.  Details, details.