The mention of Rio conjures up images and emotions for everyone. A funky, hip, fun city, it is a mix of Mother Nature’s paradise and man-made amenities. It’s a place where coastal roads hug the huge craggy mountain faces that jut up towards the sky, and a place that throws one of the biggest parties on earth! I had the pleasure of visiting Rio de Janeiro with EMBRATUR, Adventure.com and LATAM as a part of AFAR’s partnership with USTOA, and although we only had about a day to zip around the city, our itinerary took us to some of Rio’s timeless attractions along with a few that fly under most travelers’ radars. 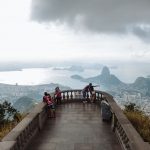 A panoramic view of Rio de Janeiro from Corcovado Mountain 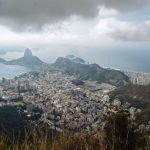 Looking toward Sugarloaf Mountain from Corcovado 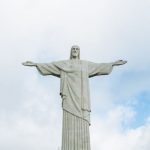 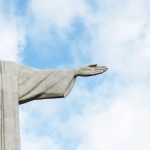 Christ the Redeemer in all its glory 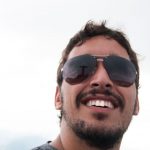 Our local guide Rodrigo taking in the views or Corcovado

Our group woke early and took a bus up a winding, densely forested road to Corcovado Mountain, home of the iconic Christ the Redeemer statue. It was early enough that we beat the crowds, but unfortunately on this morning, we also beat the sunshine. Clouds, rain and haze surrounded the platform in front of Christ the Redeemer barraging the statue in a cloak of grey. After roughly 10 minutes, the cloud hovering overhead passed and revealed the statue in its full grandeur. Those that were present on the platform below began frantically taking pictures and selfies before another ominous cloud slowly rolled in, replacing the previous. As nice as it was to see the statue in front of a blue-sky backdrop, the quickly moving storm clouds made the statue even more impressive – all 98 feet of Christ’s form seemingly floating through a mass of haze. 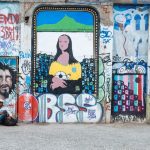 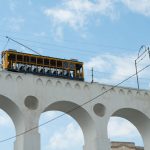 A cable car running through the Lapa district

From Corcovado, our local guide, Rodrigo, and I split from the rest of the group and headed to one of Rio’s better known areas, the Lapa neighborhood – the yin to Copacabana and Ipanema’s beach-scene yang. Lapa is a playground of motion and we quickly got caught up in the morning commuters buzzing about the streets, briefcases and aromatic coffee in tow. What I loved about Lapa was the eclectic mix of artistic influences from graffiti and murals to colonial architecture and oddly futuristic buildings – the embodiment of Rio, albeit on a smaller scale. 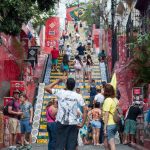 The incredible Escadaria Selarón, such a great artwork 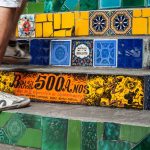 A close up of some tiles used in the Escadaria Selarón 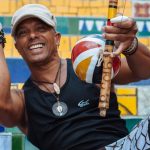 A local gentleman plays a berimbau on the Escadaria Selarón 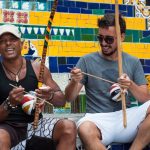 Undoubtedly, and for good reason, the coolest thing in Lapa is the Escadaria Selarón, a colorful, mosaicked set of steps embellished with bits of tile, ceramics and mirrors created by artist and former local Jorge Selarón. The Chilean-born Selarón began his beautification of the steps as a dedication to the Brazilian people, but what started as a small scale mosaic blew-up in scale and popularity through the years becoming an obsession for Selarón. In the later years of the project, visitors from all around the world donated tile to Selarón’s art piece. Walking up the steps, I found spotting the various cultural references fascinating as they really show how many people Selarón inspired with his art. 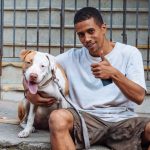 A man out walking his dog in Lapa 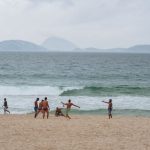 A group of guys juggling a soccer ball on Copacabana Beach 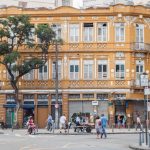 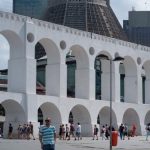 The Carioca Aqueduct in front of the Metropolitan Cathedral of Rio de Janeiro, two highly contrasting styles in Lapa

Later that afternoon, the same clouds that earlier graced the hem of Christ’s garment had relocated to Copacabana Beach. Fortunately, after a while the rain stopped and pedestrians started to emerge, repopulating the cycling lanes and walkways lining the beach. The little cafés brushed water off of their chairs and readied their bar stations, and even though the weather wasn’t ideal, it was easy to see why these beaches are so appealing. I sat down with a coffee and watched groups of men juggle a soccer ball while others competitively pummeled a volleyball back and forth. I didn’t get the picturesque beach-scene sunset that is often depicted in travel shows and movies but just being present and enjoying the distinctive vibe was rewarding enough.

Later that evening our group headed back to Lapa to get a taste of the night life. As I suspected, the night crowd around Lapa was as energetic as the commuters I had encountered that morning. You could tell Rio de Janeiro is a city where citizens work and play equally as hard. As we walked toward a boulevard full of cafes and restaurants, we were sidetracked by a rhythmic raucous coming from inside a dimly-lit warehouse. We peaked inside and were greeted by the sound of drums thumping heavily while a circle of musicians swayed along to the beat. We watched for a while then headed back outside where tables and chairs began filling the sidewalks, making it tough to discern where one restaurant ended and another began. The whole area was filled with a cheery air, such as that of a family function. It was the perfect way to cap off a day in Rio de Janeiro, and surprisingly, I didn’t regret that I had only been able to explore for one day. It is such a charming city that it made a very vivid and lasting impression, one that will stick with me until my next visit!

Colin Roohan is a travel photographer interested in documenting experiences with culture and life. In addition to his work with AFAR, Colin has been published in Travel + Leisure, The Royal Geographical Society’s Hidden Journeys, and Groove Magazine, amongst others. In addition to journalistic pursuits, Colin captures portraits and documents events around Southern California. Hear more about his journey to Brazil at AFAR.com.