Including an interview with Wendy, my Colombian “sister”

Not everyone would be comfortable opening up their home, their family and themselves to complete strangers–particularly strangers from a different continent without any knowledge of their language. But the Perez-Cuesta family didn’t hesitate to invite our Travel Together group to their home on our very first night in Colombia. Justin, my cameraman, Sherry, our AFAR writer, and I were welcomed into their family with open arms. 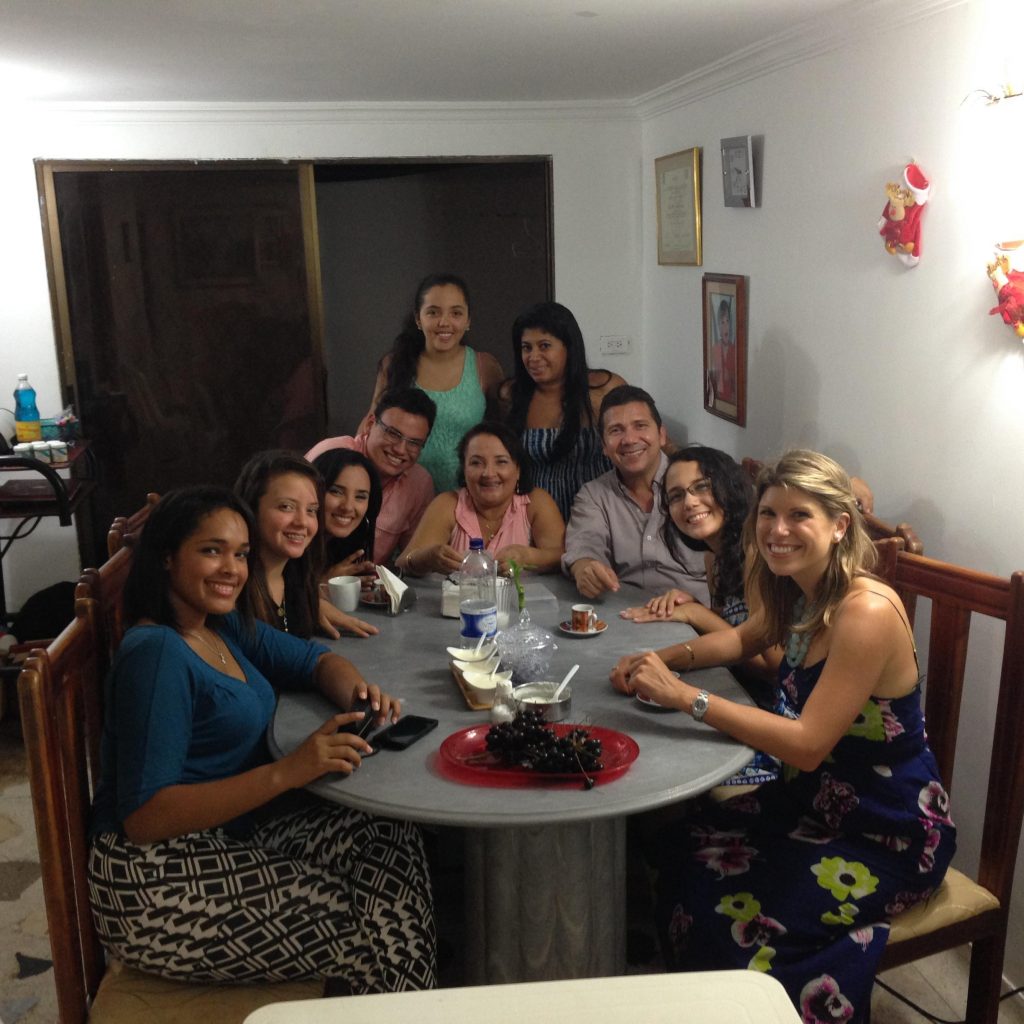 Avanti Destinations arranged for our guide and driver to pick us up from our sophisticated colonial hotel in Cartagena’s old city, Hotel Santa Clara. I’d only been in this country a few hours and I already had seen part of the old city and now, the bustling surrounding neighborhoods, streets packed with people shopping as if it was the Colombian equivalent of “Black Friday.”

Our car pulled down some quieter, residential streets and turned on a street that was simply alight with Christmas decorations. Lucky for us we had arrived the day before the Feast of the Immaculate Conception–the festival of lights and city-wide kick- off to the Christmas season. It was a wonderfully festive time to see the city and it seemed that every home in Cartagena was bursting with the Christmas spirit. 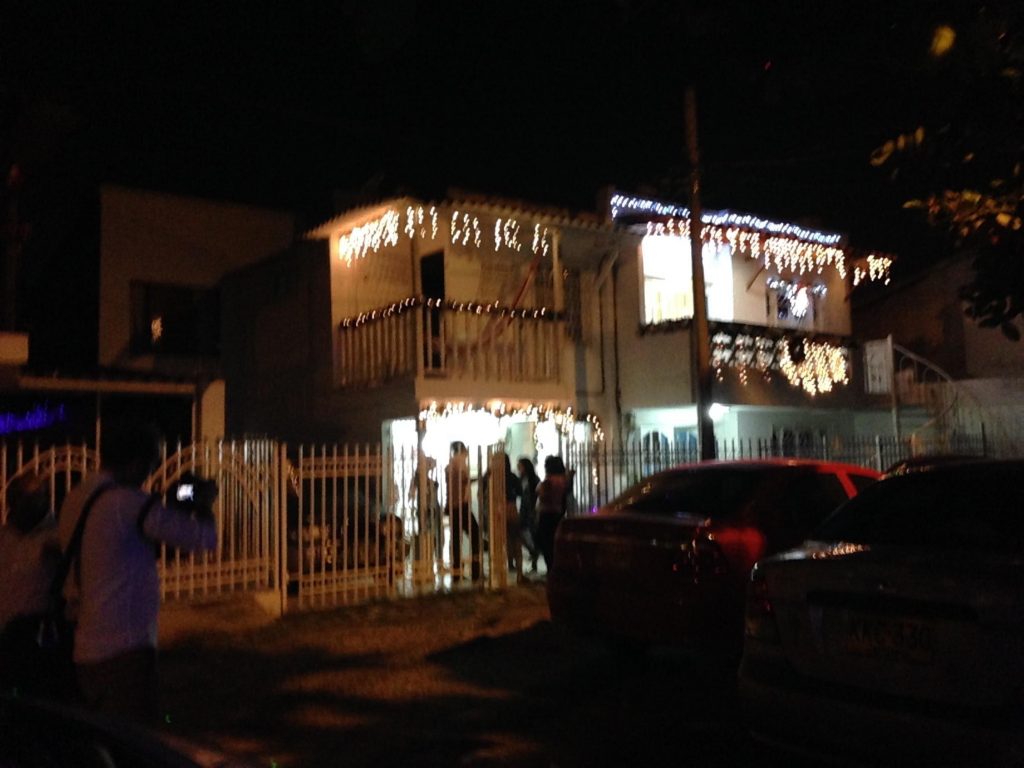 Scanning the street, there was one home that stuck out in particular. The strands of lights were blinking rapidly, the music spilling out of the open door and the laughing voices of people inside carried to our car. To my delight, this was where we were heading–the six-person Perez Cuesta family was inside, expecting us for dinner–and we quickly found that out when they started waving from the windows.

In the doorway, I was greeted by a bevy of beautiful girls, all hugs and kisses and “Buenos Tardes”–the biggest hug of all coming from Mama Ruth Cuesta, one of the warmest people that I’ve ever met without a word of common language. The three of us American amigos cozied up in the living room, surrounded by mama and her four daughters, Wendy, Deymi, Leidy and Yurani, and cousin Melissa. 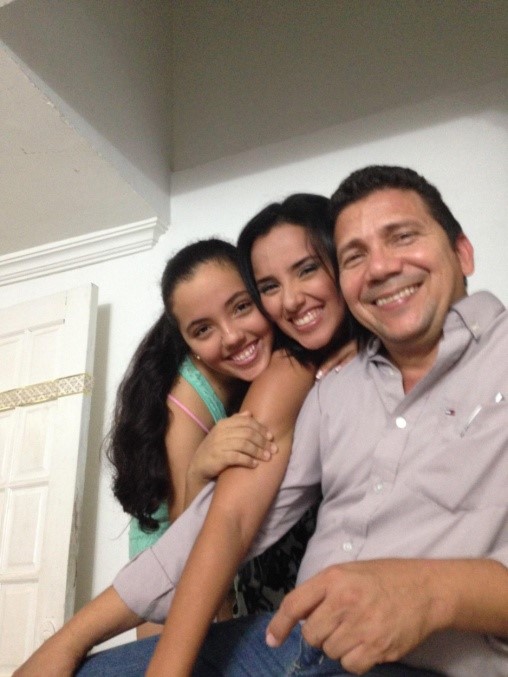 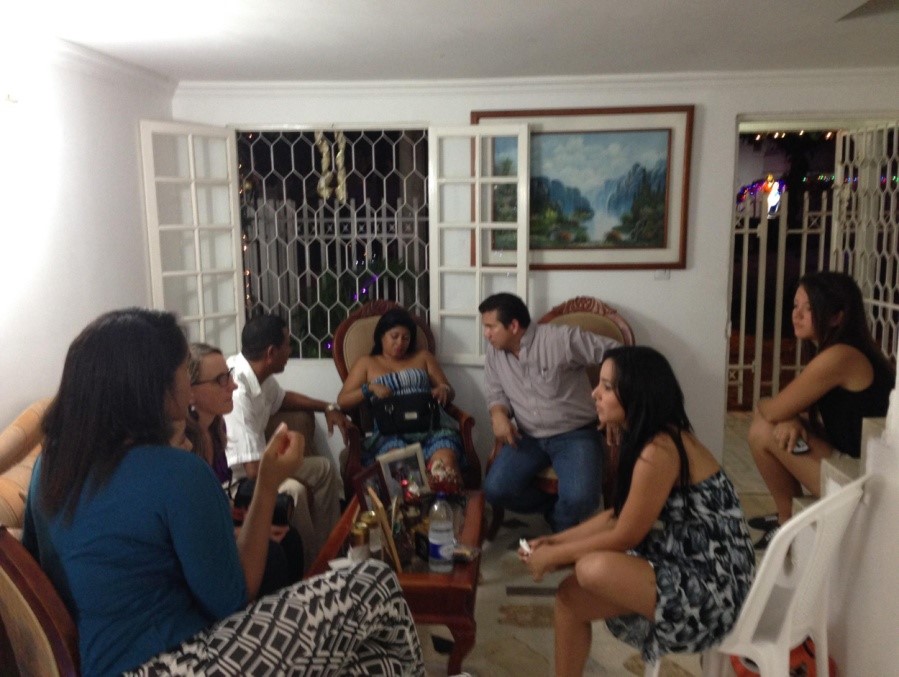 Hanging out before dinner

Their home had framed photos on every surface showing grandma and grandpa, school graduations and proms, and prime placement was given to the large, twinkling Christmas tree. Perched on couches, steps and the floor, all the girls showered us with questions, their English noticeably good, and they showed us photos on their phones and giggled bashfully at their English. The daughters translated any especially amusing parts for mama, who was laughing along anyway.

Carlos, the patriarch, came in from work, all smiles and warmth, just like the rest of his family. He gave us each big hugs after he too was showered by kisses from his daughters. It was an overwhelming and heartwarming scene.

I was able to communicate my questions about their daily life, school, jobs, and boyfriends–finding we had a lot in common. I’ve said this before, but when you travel you just find that people are more alike than they are different. 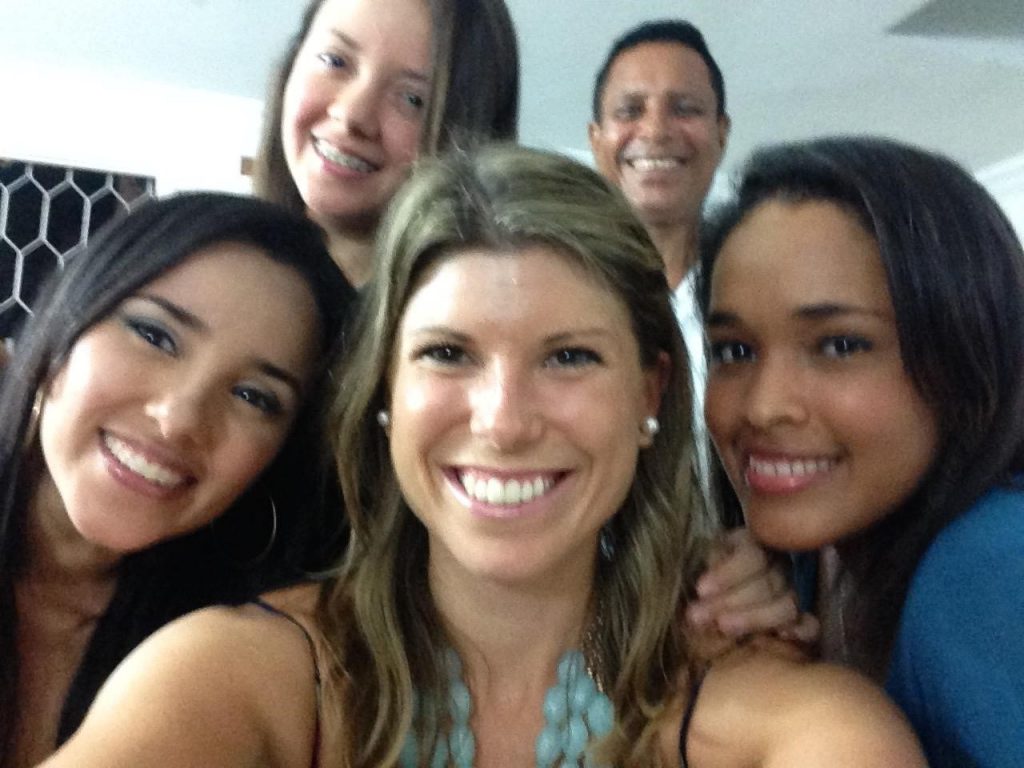 One exchange that I will never forget was our comparison of Christmas Eve traditions. They asked what my family did on Christmas Eve and I said that we have a fondue dinner, some champagne and we watch a Christmas movie. This sent the girls into hysterics:

”A Christmas movie?! On Christmas, you watch a movie with your family? Haha! Why?”

“We dance!” Said the sisters in unison and they got up and started dancing, Mama looking on in approval.

Okay Cartagena, you win. Now that I think about it, I guess it is a little lame to sit silently in the dark, watching a movie you’ve seen a hundred times, with family that you don’t see often,  when you actually could be dancing! That is Cartagena to me in a nutshell: every moment seized, and there’s always a reason to be dancing.

One of the sisters asked if I wanted to see the upstairs, so I got a tour of their parents’ room, and all the sisters’ rooms. I was impressed that three girls split two rooms and two beds.  This was yet another uncommon occurrence in the USA–sisters sharing anything let alone a bed. With a family this close, they didn’t need any more space.

Mama called out for dinner and I found myself in the kitchen watching the housekeeper prepare “platanos.” She would smash each banana disk with a wooden tool, then fry them twice, filling a plate of our soon-to-be appetizer. Just the process looked fun so she let me jump in, laughing when I over-squished my plantain. We ate these double fried “platanos” with a dollop of suaro, or sour cream, and wow, they were devilishly good. I could hear the housekeeper still laughing about my squishing from the kitchen. 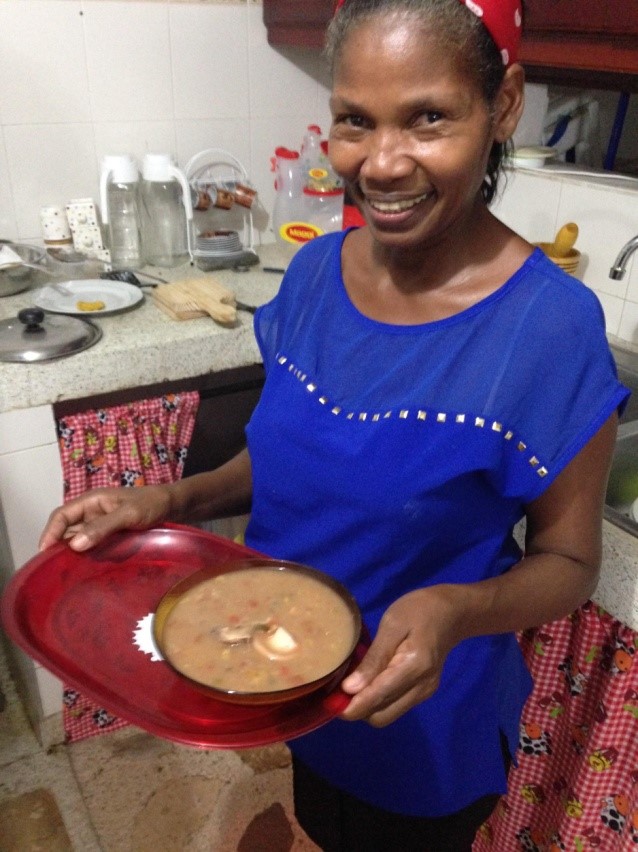 She made a great Marisco… 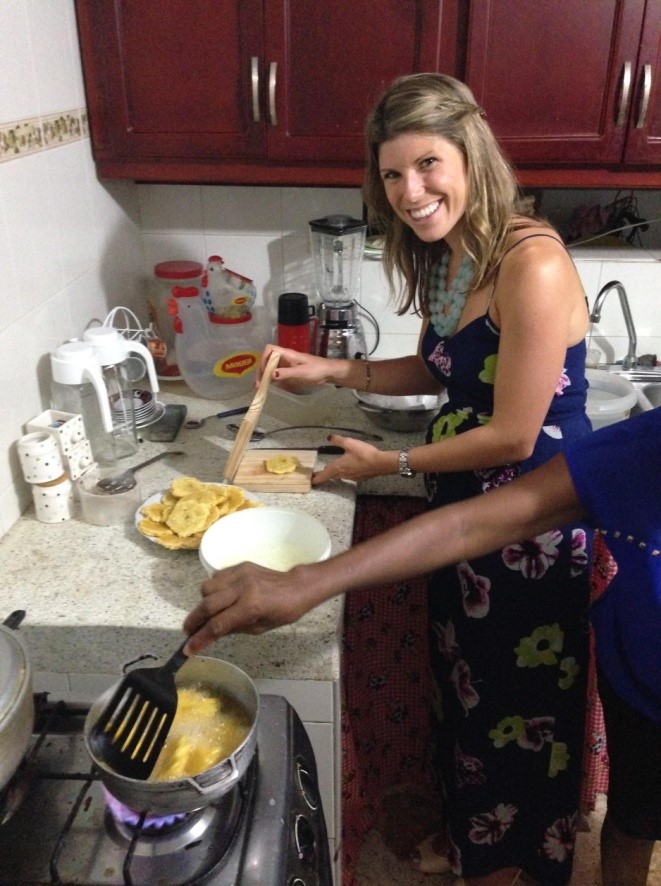 …and taught me how to make Platanos

The dinner table was filled, arm to arm, and more plastic chairs were brought in from outside to accommodate the ever increasing number of guests. Cousins walked over from across the street, Wendy’s boyfriend stopped by, our driver came in, and we were joined by the local Cartagena tourism guide–our table was bursting with people. They must have smelled the Marisco, or seafood stew, that had been bubbling all day. Throughout dinner, the conversation never ceased and between bites I learned about Wendy’s job, her sister’s favorite spots to go out,  where to shop and what the locals were getting up to this holiday weekend. 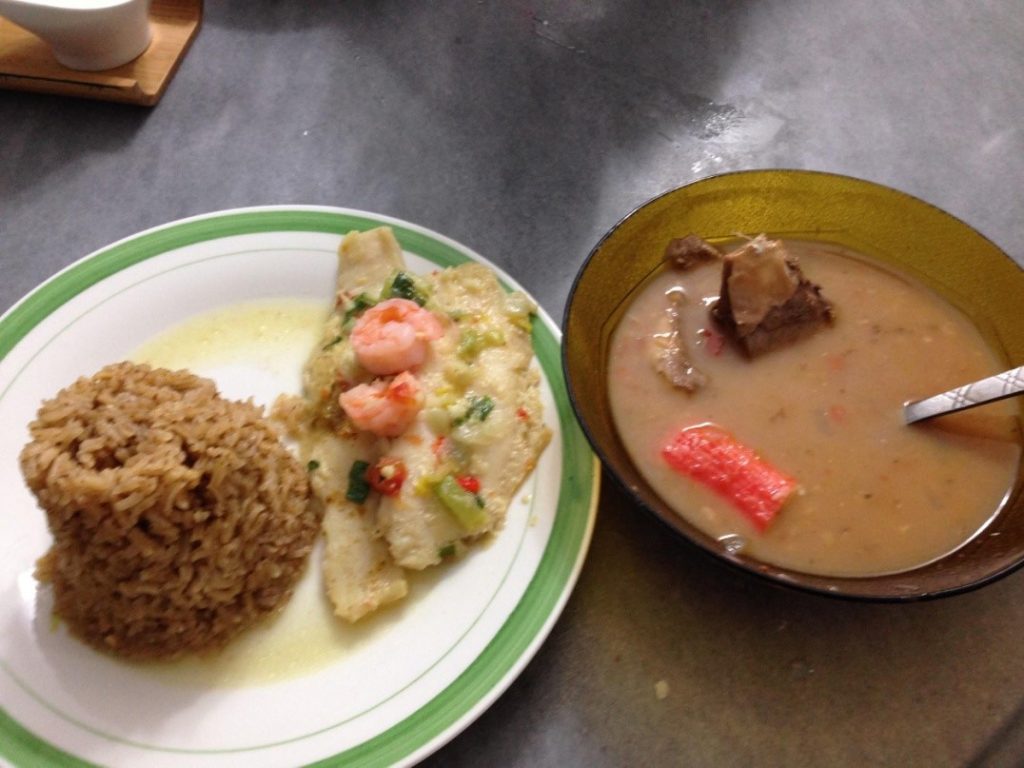 After dinner we went back to the couch for some sweets– they introduced me to a local favorite dessert: squeaky cheese paired a cube of guava paste–a salty/sweet combo served on toothpick bite. We continued our chats about Hollywood, fashion, travel, weddings–we were able to communicate beautifully without having the same native language. 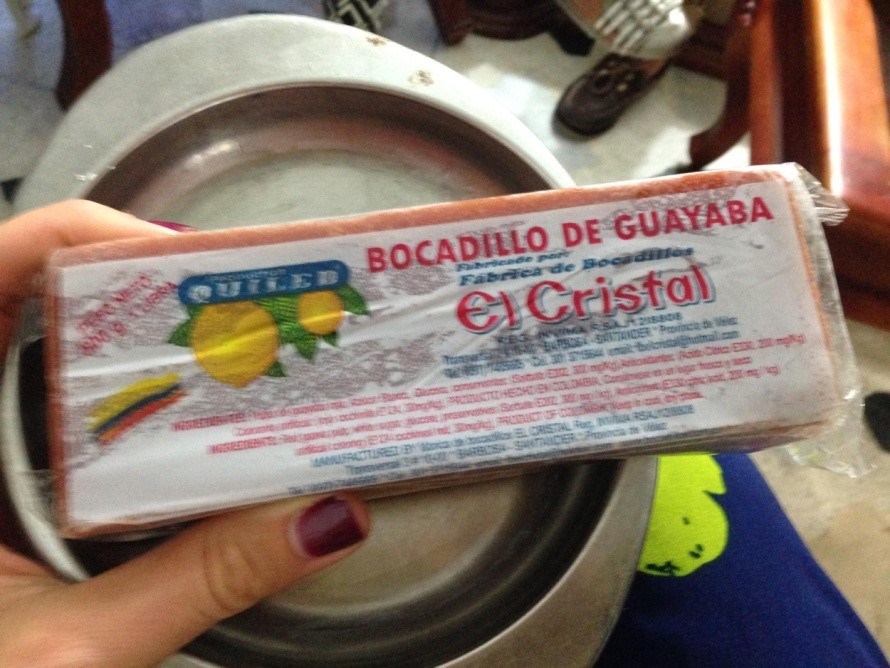 By the end of the night, I felt like I was part of the Perez Cuesta family and I just wanted to hang out with them for the rest of our stay! And though it’s hard to believe they’d want to do that, they definitely made me feel like they did. Waving goodbye and thanking them profusely for their generosity, time and genuine warmth, I felt that my American heart had grown three sizes but still it was nowhere as nearly large as a Colombian’s.  <3

That was my side of the evening, but I truly wondered if the Perez-Cuesta girls and their mom and dad had as much of an impactful night as I did. Well, I’ve kept in touch with one of the daughters, Wendy, via Instagram, and I reached out to her to have her weigh in on her perspective of the night.

Kelley Ferro: What was your reaction to having American guests come visit your house?

Wendy Cuesta: Well, having people from the United States at our home was great, not just because we have fun but because we can actually show something different from what the TV and internet says about people in our country.

KF: How did your family decide what to make for dinner?

WC: If I can be honest… “our family” doesn’t decide what to make for dinner… our mom does! She is actually a great cook because she loves to do it! And in the Caribbean, seafood is of course the main dish… so is not really hard to decide what to serve.

KF: What was your favorite parts of the night?

WC: Well, my father loved the part when everyone just relaxes and start laughing at his jokes, which translated by me may not be as funny. My mom loves it when our guests tell her how much they love her cooking or compliments her daughters, but I think she enjoys the whole process since shopping for food until we say goodbye. I think for me and my sisters, having pictures taken was so much fun, and talking to you about personal lives, like your wedding or my sister’s job. It felt like we were having friends visiting that we hadn’t seen in years… not strangers at all.

KF: What did you learn about Americans from all of us?

WC: I learned that when you are open minded, life is just more fun. You all seemed so happy to be with us and having a ‘different night’ from usual tourism or traditional jobs, that it makes people wonder if maybe we are not being too close to possibilities or too shy to others.

KF: What did you like telling us about Colombia?

WC: I’m not exactly sure if we actually taught you anything… but I think we all loved the fact that you could see us as a family, as a real non-acting family. We love each other so much and are very close, and sadly I think is something parents and children are missing out these days, so I guess I’m just grateful for the beautiful family I have, that even though not all of us speak English, we manage to communicate altogether with you and have a great evening. And that’s actually what happens to us in daily life: we may not understand everything about each other, but we always figure things out, and I think that’s unique and precious.

I couldn’t agree more. Special thanks to the Perez-Cuesta Family for setting the tone for our entire experience in Cartagena and to Avanti Destinations for making the experience possible.