I craned my neck to look into each doorway that we passed. We were moving along at good clip on a bike taxi, or “bike rickshaw,” through the narrow streets of a Beijing neighborhood. The streets were lined with high walls and intimidating doorways. These imposing facades gave very little insight into what lay behind…but I knew. They were hiding courtyards with bird cages, children playing, cats basking in the sun, old ladies hanging laundry. I was welcomed into one of these homes just moments before, to have lunch with the Fan family. This family welcomes travelers, entertains them with music and allows them to peek into this otherwise hidden daily life. I only had a taste of what was on the inside and I wanted to see more, so desperately I tried to catch glimpses through open doorways as we bounced by. 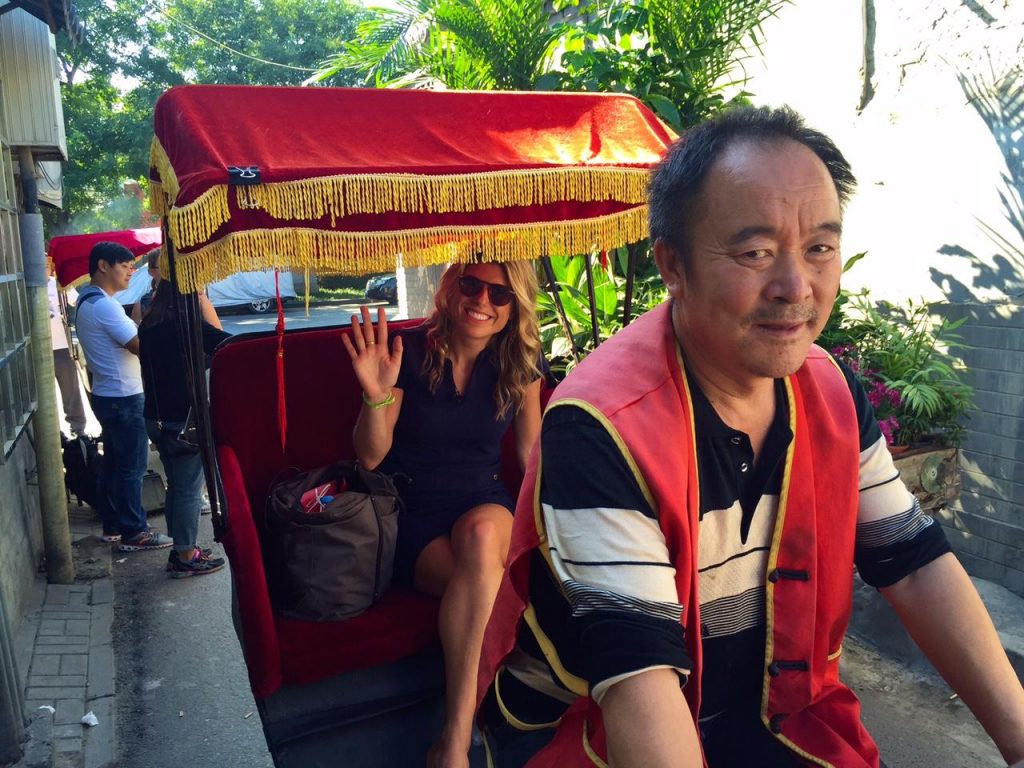 This neighborhood of Beijing is known as the “hutongs,” or what the locals refer to as “slums.” That word is a bit abrasive and I had a very different idea in my head of what we were going to find before we came here. As we bounced down the cobbled streets, vines crawling up impressive walls, old men playing mahjong on plastic tables down side streets, this didn’t feel at all like a slum. Sure, it was a little worse for wear in some areas, but these one story buildings were over a century old. It felt like one of the first times that I actually got a real insight into China’s culture. 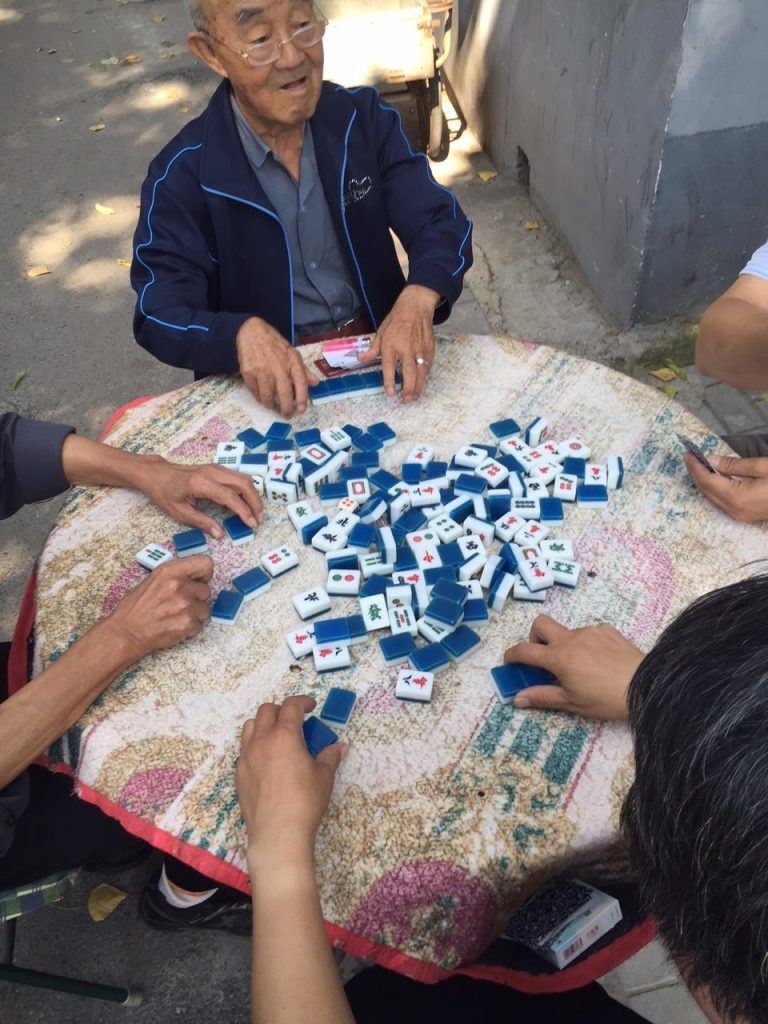 They seemed to be having the best time

Thus far I had been exposed to the clean, precise streets of orderly Shanghai, the modernized historical city of Xi’an, with its manicured parks, and the hyper modern downtown area of Beijing which could have been New York City or Paris if you looked quickly. Louis Vuitton, Hermes, Burberry and Apple lined the streets and the busy crosswalks were filled with well-heeled Chinese carrying smartphones. Here in the sleepy, tree-lined hutongs, there were more birds chirping than car horns. Life was slower and moving at the same pace of the Chinese ancestors that lived here generations before. China’s door to personal life was left ajar. 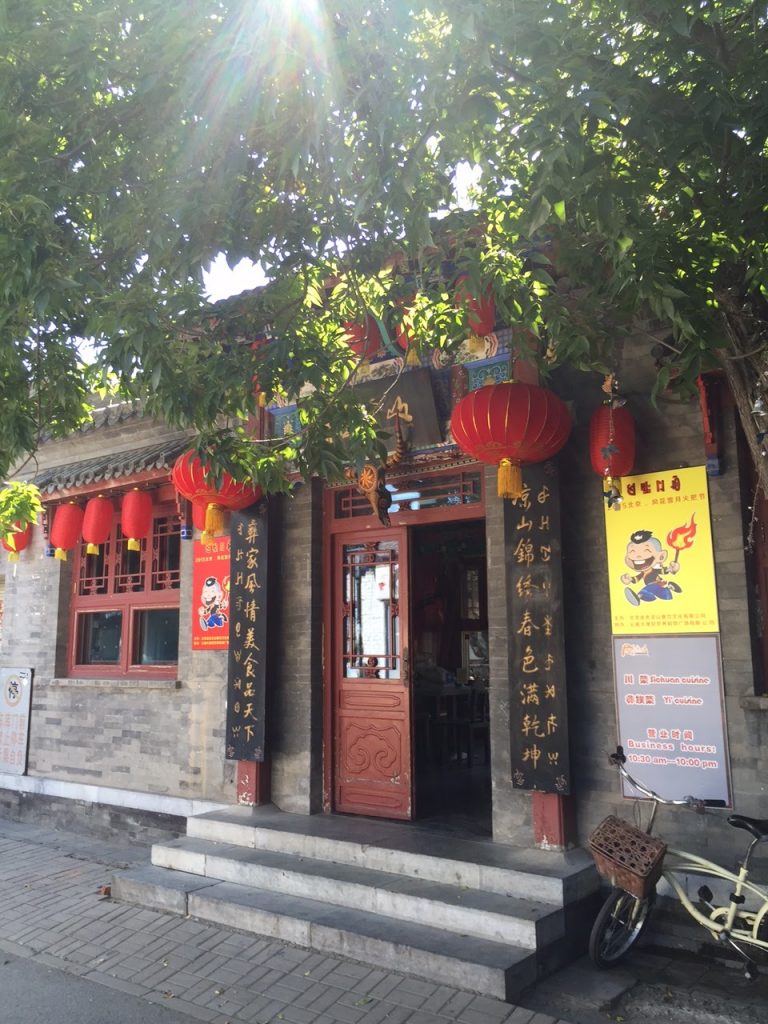 Stunning doorways in the hutongs

Hutongs used to dominate Beijing but they’ve now been bulldozed to give way for the city’s rapid development. However, there are still several century old hutongs that have been preserved and exploring these will take you back in time. We went to the Nanluoguxiang hutong, one of the more popular in the area near the Forbidden City. Though it isn’t as wealthy or modern as other areas, there was energy there. A resurgence of youth had come back to these hutongs, choosing to appreciate the past instead of plow forward to the newer, faster, the shinier. On one block, old men were playing mahjong outside but on the other, a young couple shared headphones as they poured over their laptop, drinking chai lattes at a laid-back cafe. We hopped off the rickshaw to browse the kitschy shops selling minimalist homewares, succulents and vintage handbags. A number of restaurants and cafes caught my eye, and I typed their names on my iPhone, hoping for the chance to try them out on a return trip. 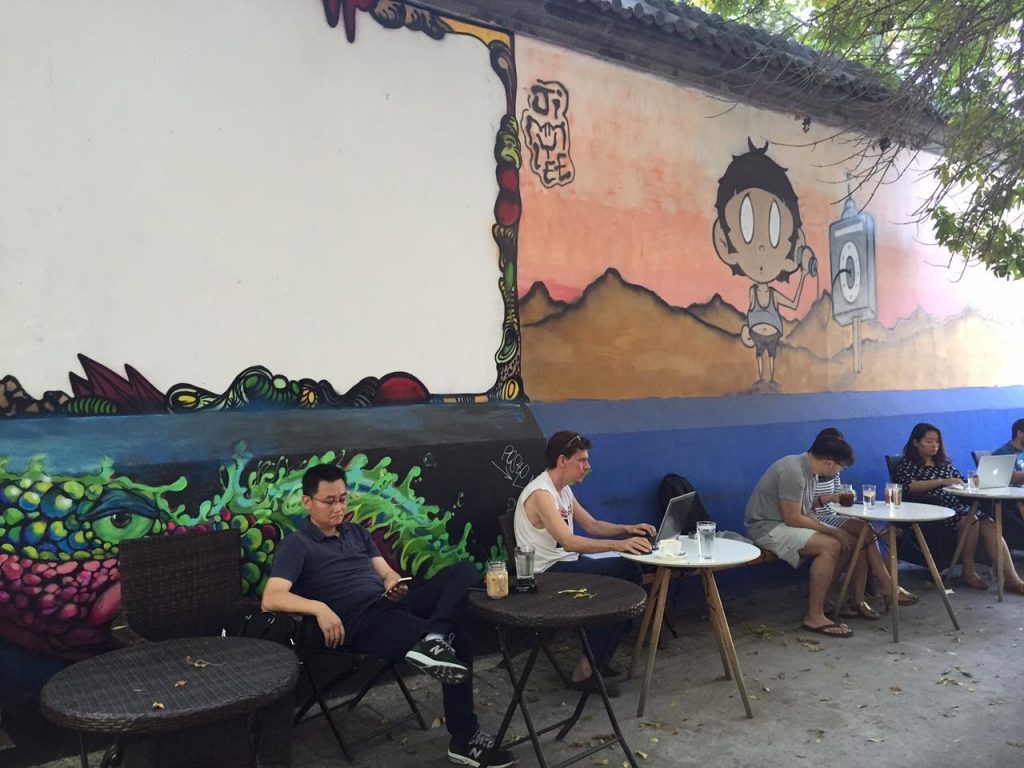 Chill cafes in the Nanluoguxiang hutong

But Bar Si…if grabbed our attention immediately. Two millennial men sat on wooden benches in front, wearing black t-shirts, eyeliner and smoking cigarettes. The unusual name is open-ended, giving the sense of “what if” or endless possibilities. It seemed appropriate for a hipster coffeehouse meets clubby bar located on a centuries old street. It also was decidedly quiet on this Friday afternoon. Understandably so, as it was crowded until early morning and is one of the nightlife destinations on this trip. Many of these sleepy cafes and bars morph into the city’s new in-the-know going out spot. After dusk, music flows from the open windows until daybreak. We grabbed a delicious coffee, ordered via a tablet menu, and we considered grabbing a cold beer from their impressive list (Brooklyn beer in Beijing, what!). But we had at least nine more hours of shooting, so we forged on! 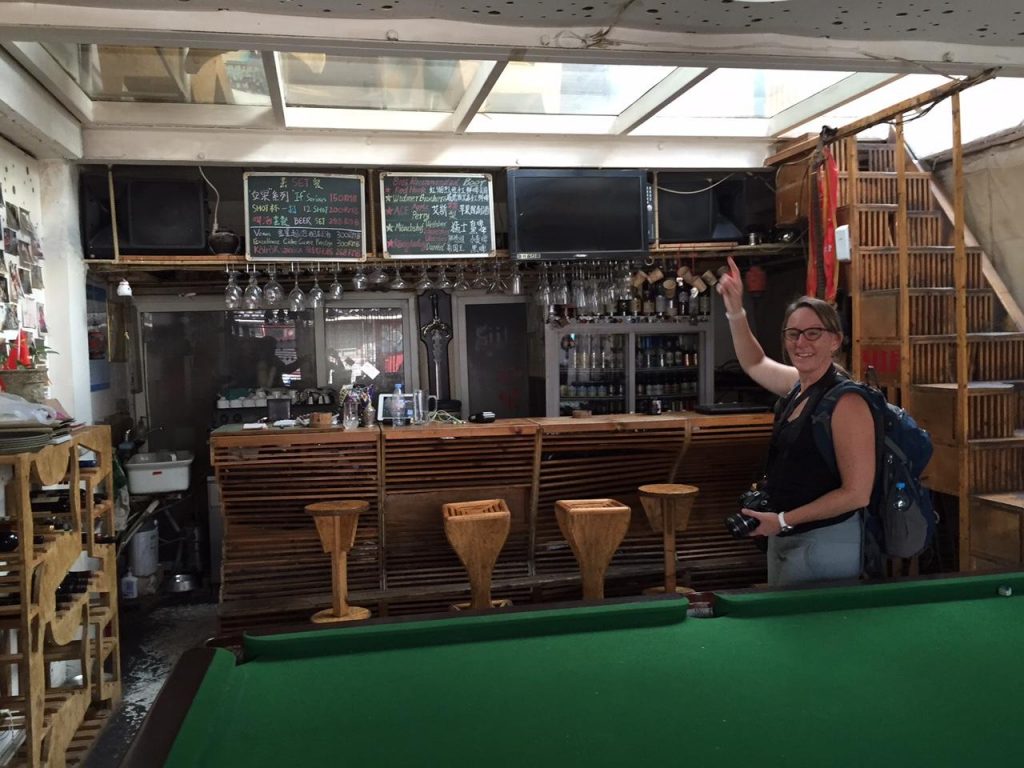 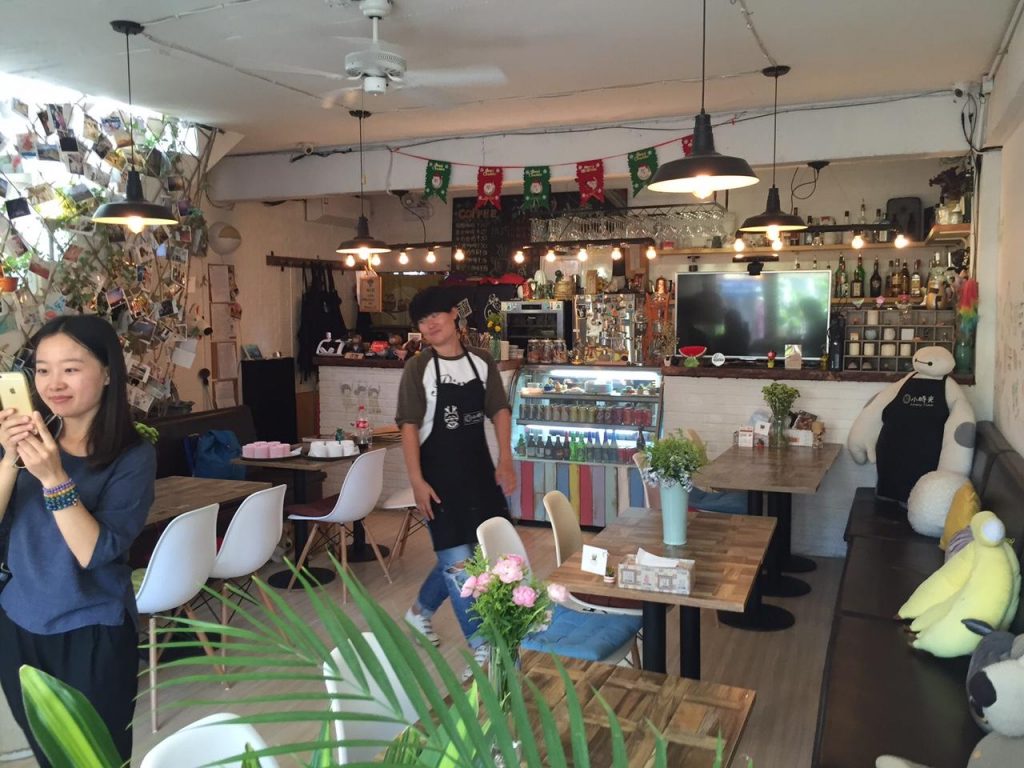 Each coffee shop had personality

Hutongs were originally created by the Mongol Empire, the word meaning “water well.” They were designed to center around water and now that sense of community continues. The bathrooms of the hutongs are communal, with one shared single sex bathroom every few blocks. This feature was something I had never seen before and to be honest, was a bit hesitant about trying. But nature called and to my thankful surprise, they were very clean! 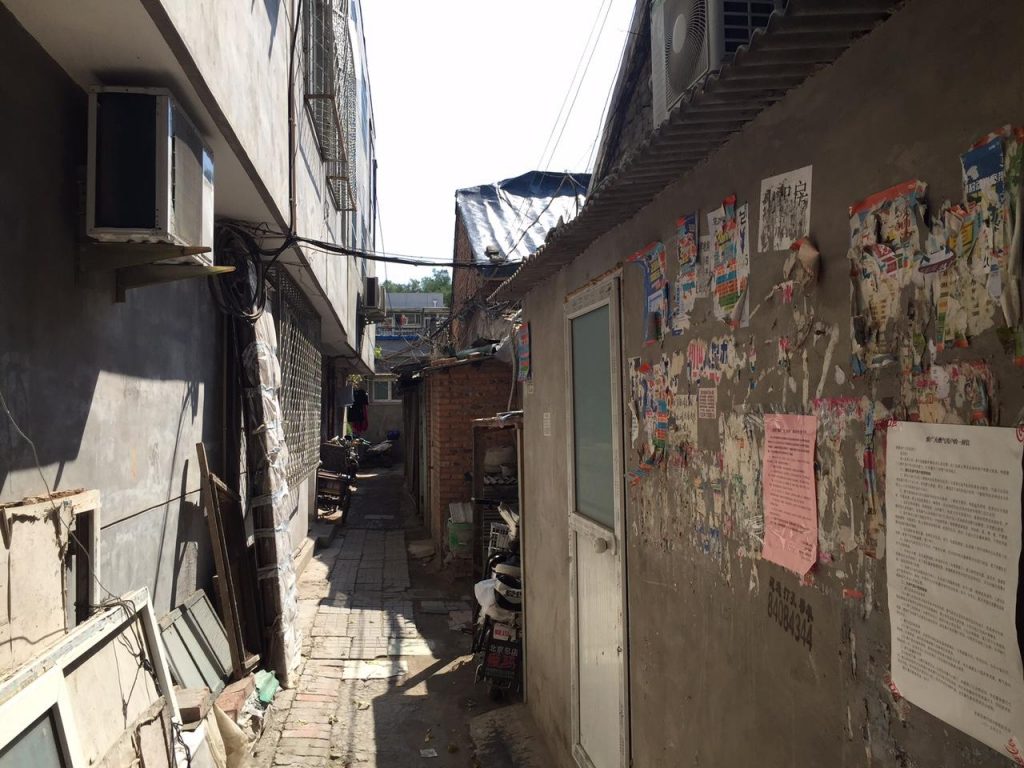 A glimpse down the narrow alley separating the courtyard houses

We continued to meander through the alleys around the districts notable Drum Tower. These maze like streets continued to baffle me with one seeming like a replica of Abbot-Kinney, another like it was 1915. It pains me that one of the most historical parts of the city has been diminishing. Back in 1990, 600 hutongs were destroyed each year. However, there’s been an effort to preserve more and more of these culturally significant, personal homes. The gentrification by the shops, cafes and bars like Si…if, may serve to help this preservation by bringing in more awareness from the local and tourist population as well. The authentic local life is what many of today’s travelers are looking for and for the sake of the remaining residents; I can only hope that they continue to flourish. My best tip is to go spend a day there, chat up the locals and enjoy this living history. And I’d suggest, don’t wait too long. 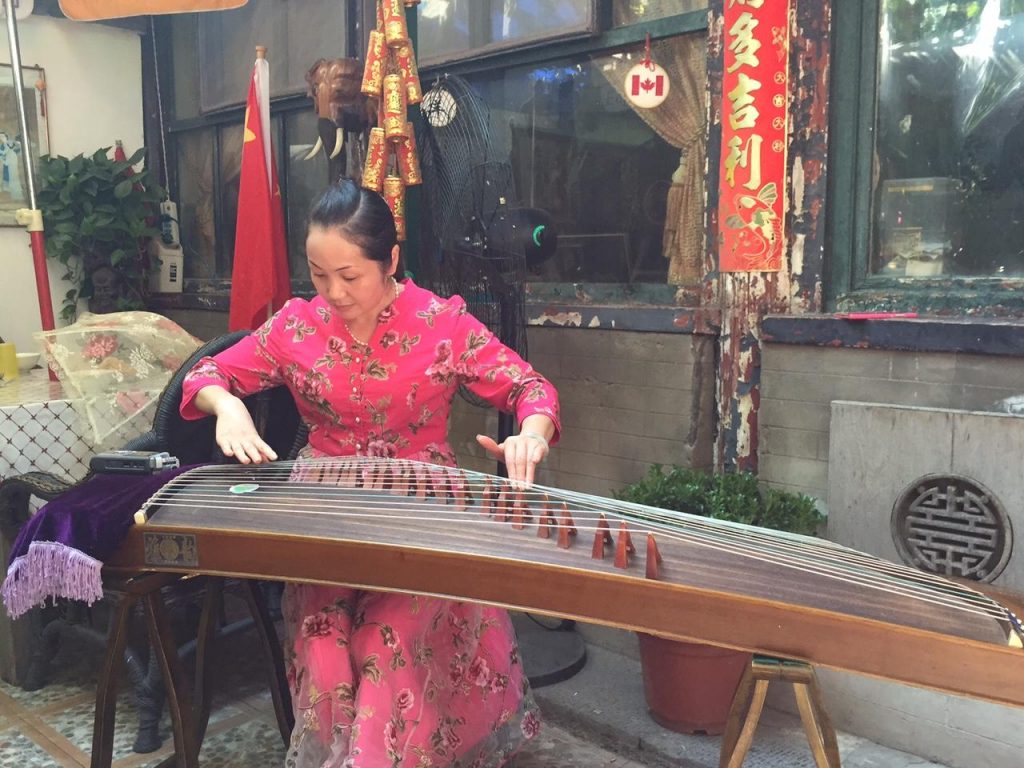 Mrs. Fan, performing a hauntingly beautiful song for us after lunch

Kelley Ferro is a travel expert & video journalist living in California. She films her show, Get Lost, around the world–hopping on a plane at least twice a month. She is also a contributor to Tripfilms.com. For more on her travels, follow Kelley’s  Facebook, Twitter and Instagram pages.