At the risk of sounding like a flake, it seemed that as I approached Denali, I could feel its power grow. 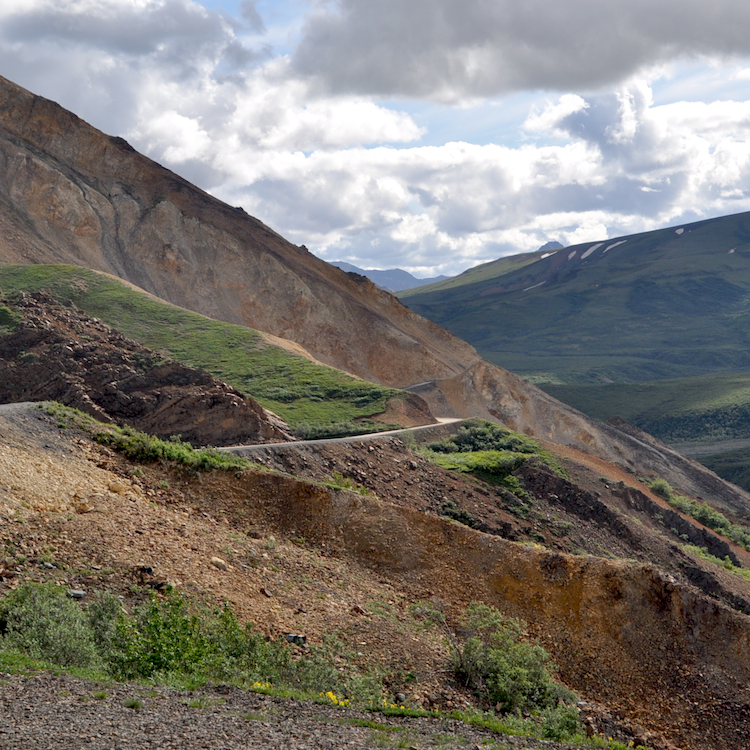 I first noticed things were changing when we crossed a clear geographic divide between where we had been and where we were headed. Specifically, past the summit of Broad Pass on the journey between Anchorage and Denali, rivers begin to flow north, not to the Pacific, but to the Bering Sea, the Arctic Sea. (The Arctic! In my mind, my New York apartment swept exponentially further away.) During the last Ice Age, the region around this pass was buried under three miles of ice. The single thing tall enough to be seen above the thick rigid blanket was Denali. We can’t see Denali from here, but now we know it’s there.

The observatory train I was riding the McKinley Explorer, picks up the course of the Nenana River at the base of Panorama Mountain. The schist monolith looms tall above the rest of the incredibly high mountains and the train tracks pass by too closely to see it by itself, to truly measure its height or to photograph it to prove to others how tall it truly is. This mountain, unlike it green-mantled neighbors, rises in shades of grey, like a graphite-pencil drawing of a mountain against a backdrop of lively green, like the deepest chord on a pipe organ made manifest. Even its flanks are divided by alluvial piles of grey avalanched rock—the other mountains have waving ferns and buoyant moss and high grass tucked in their pleated skirts. The young train guide says: This mountain is tall, yes? We all nod, eyes on its immensity looming above the windowed dome of the train. He says: If you stack three of this mountain, one on top the other, that’s how tall Denali is.

In the dinner-theater production at the McKinley Chalet Resort, the lovely Holland America Line property directly across the Nenana River from the national park, the actors perform the story of the first ascent of Denali by two local characters. The backdrop hung behind the delightful cornball antics of the performers is painted with a deliberately amateurish abstraction of the mountain, a strangely mesmerizing canvas of ice blue, shimmery white, angles and ridges with orange-pink sunset tones.  The cast members ham it up and laugh, sing and tell jokes, cajole and engage the audience, but that unblinking backdrop tells the story that they can’t. Outside those faux-rustic walls, there is a mountain.

Only 30% of visitors to the park actually get to see Denali—the mountain is more often than not obscured by the clouds that snag on its peaks and gather around it. Rain was forecast for my first day in the park so I brace myself for the possibility of not seeing the mountain. 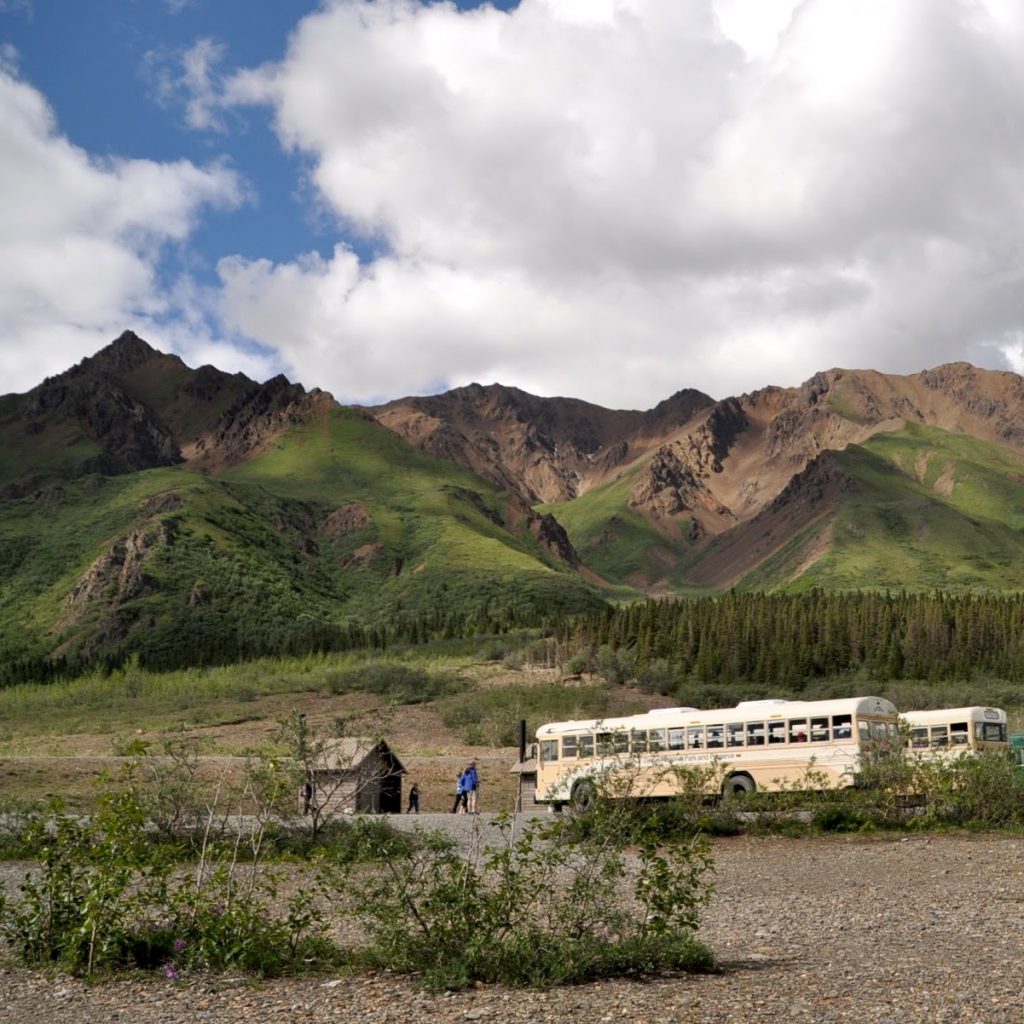 The admirably democratic tradition of the National Park Service invites everyone to enjoy Denali National Park and Preserve but here everyone is limited to just one way in: the Park Road, a 92-mile-long road that runs west from the entrance on the east side of the park, roughly paralleling the Alaska Range. At the park gate, visitors on my tour, the Tundra Wilderness Tour, rich and poor, old and young climb onto tan-colored converted school buses to be driven as far as Mile 62, the Stony Hill Overlook. The narrow corridor of the vast six-million-acre park visible from the road is thrilling, glorious, and diverse, but the thought of all those many mountainsides and valleys and glaciers and wild animals beyond its reach is distracting. During the course of a seven-hour round-trip, my busload encountered antelope, Arctic ground squirrels, moose, Dall sheep, and the big-ticket item: a blond grizzly bear asleep on a hillside who woke, walked a bit and then stretched out to sleep some more. 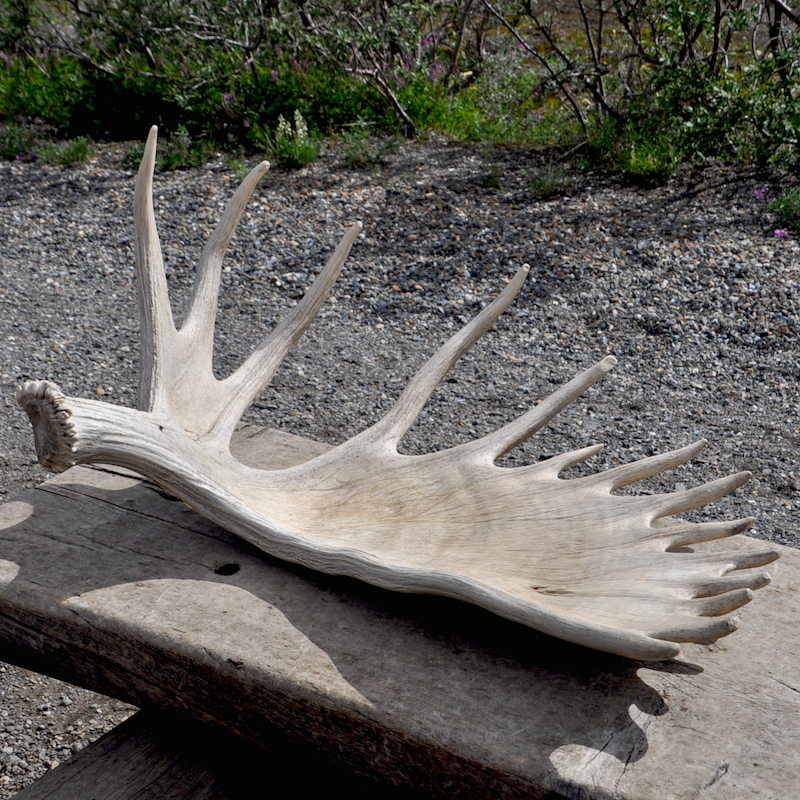 Along the way we also saw braided rivers, glacial valleys, several mountain ranges, and the geologic big-ticket item, Denali. Just nine miles into the park, the bus climbed a rise and the driver said: There it is. Unlike the purple and green mountains around it, Denali is snow white. Its implausible white expanse is easy to mistake for a bunch of cumulous clouds clustered above the smaller mountains, until your eye notices the sharp lines and angles in that white mass, angles that make it unlike any cloud you’ve ever seen. Then you realize that those many clouds are in fact just one 20,000-foot mountain, so much taller and more magnificent than expected and you catch your breath. Or I did, anyway.  And maybe you weep a little. And proceed to take pictures and stare intently at the mountain, to capture its greatness and to remember the thrill of standing before it. And to feel grateful to be among the 30% of visitors who get to see it. 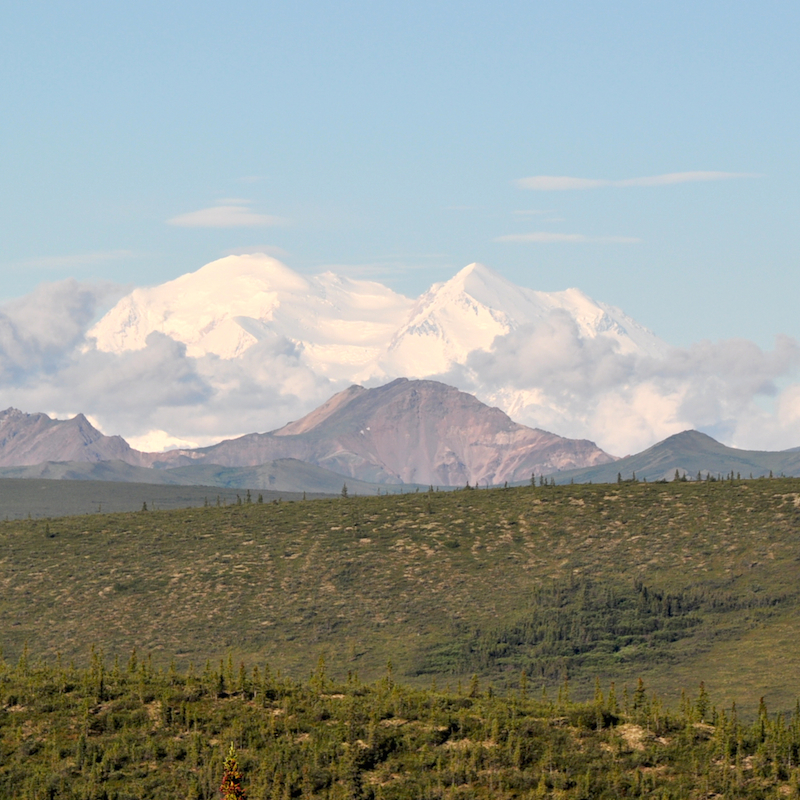 When the bus proceeded down the road, the mountain was obscured again by closer hills and by roadside spruce forests. At the next rise where we could possibly see it again, its peaks had been swathed by lavender-grey. The clouds remained for the rest of the day, but edge of the north peak, a classic pyramid-shaped mountaintop, would occasionally cut through the cloud to assert its presence. I found myself distracted by those clouds, watching and waiting for the knife-edge of the peak to appear.  And when, at the end of the day, the bus passed beyond any possible sightline of Denali, around the far side of the mountains that border the park, I was sad. I do believe I was leaving a sacred place.

When people talk about having some primal response or epiphany by visiting Bali or Rome or a safari camp, I listen and nod and wonder if maybe they’re still a bit giddy from jet lag.  More than a week has passed since I returned to the city (my trip had been a sponsored exploration of the Alaska-Yukon land programs offered by the Holland America Line, so I had a lot of experiences to process). It’s been nearly two weeks since I was near Denali, but I do still feel altered, like I came near a great force, a powerful presence.  I’ll admit it would sound flakey to the pre-Alaska me. But now I’m a different me. I’m already plotting my return to the mountain.