Everything changes for the traveler when he’s afforded an opportunity to become an active participant in his own getaway. Walking through museums, touring (but not touching – never touching!) sites of historic importance, or zipping around on a bus, boat, or car while the landscape whizzes past at 65mph: each is well and good in its own way and enjoyable from time to time, but nothing can replace the sensation one feels when engaging a local on their own turf, and at their own game. For me, this is how experience comes to life, and this is how I most feel connected to a place, a space, and people. 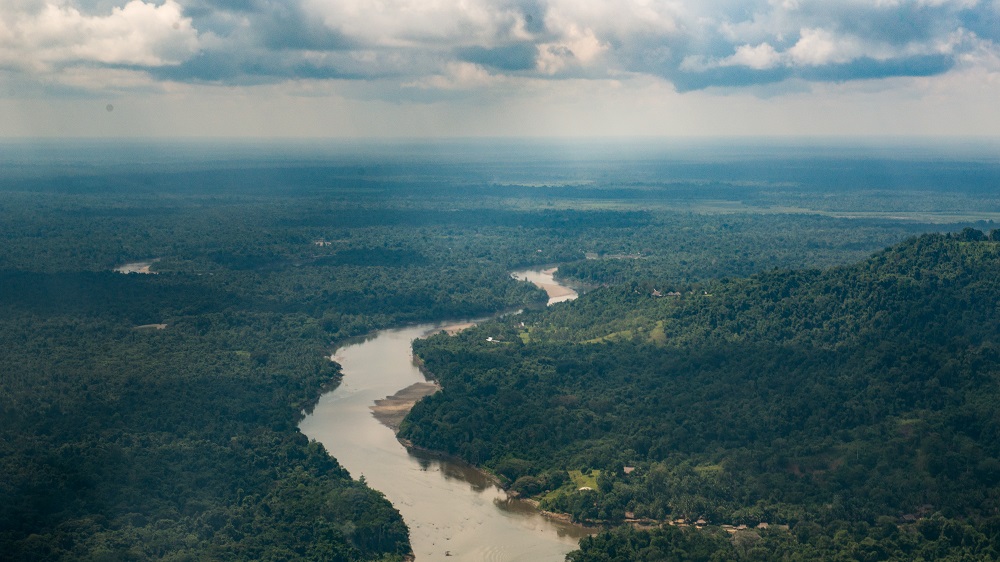 The Karawari River, seen from on high.

I felt very much alive while standing on a fallen tree out in the middle of the Karawari River, a hundred miles removed from nowhere. A cadre of local Papua New Guinean kids had caught the attention of our Swain Destinations crew while we enjoyed our riverboat lunch, and encouraged us to join them for swim. Without really thinking about what might be lurking in the water, we went for a dip. We had spent the morning visiting villages in the Arambak region, notorious the world over as the site of ancient crocodile scarification rituals, headhunters, and cannibalism. But none of that had me as a scared as that unsteady branch dangling ten feet above the river. Still, I was afraid of looking like a punk in front of the kids (and my Swain cohorts) than the water, so I took a deep breath and dove in. I popped up downriver to the unabashed cheers of my new friends, and before I knew it, I was up on that branch and ready for another death-defying bit of acrobatics. I suppose that one brief moment out on the river represented my time in Papua New Guinea in miniature – excited to be present, unsure of my footing, but eager to dive in just the same. 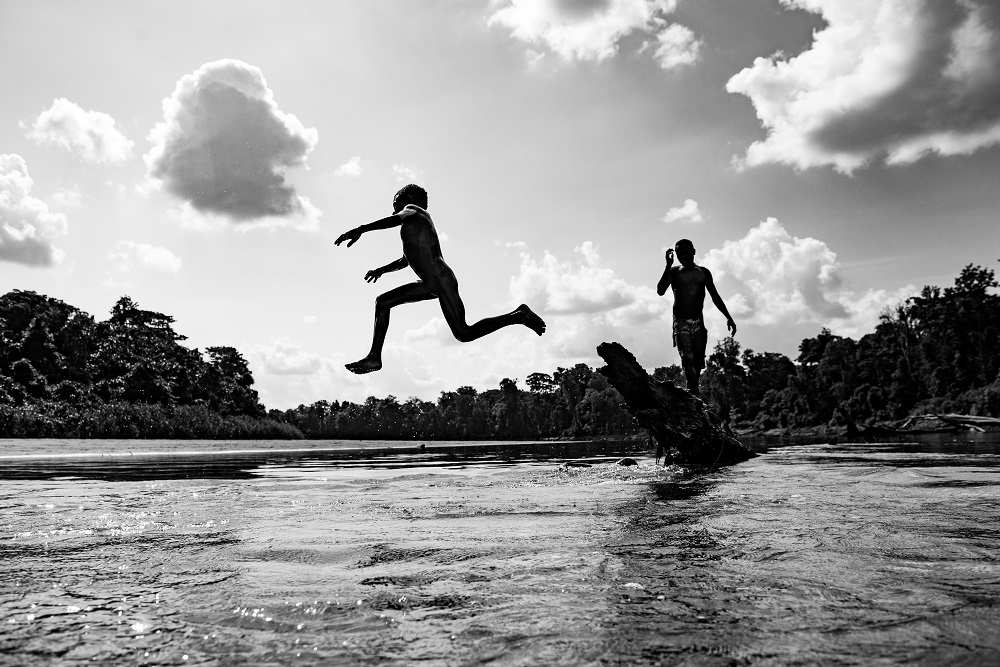 Hanging out with local kids on the river, and ready to jump into new experiences.

I think that’s how you have to approach a place as wild and as unique as PNG; with an open mind and a willingness to experience a way of life totally foreign to you. I’ve never known what it feels like to have to fish for my own dinner, plant my own crops, raise my own pigs, or carve my own canoe, and really have my life depend on it. Visiting villages along the Karawari and glimpsing at people living their lives in a way that would surely render me as useless as a screen door on a submarine in half a day was at once both humbling and beautiful. 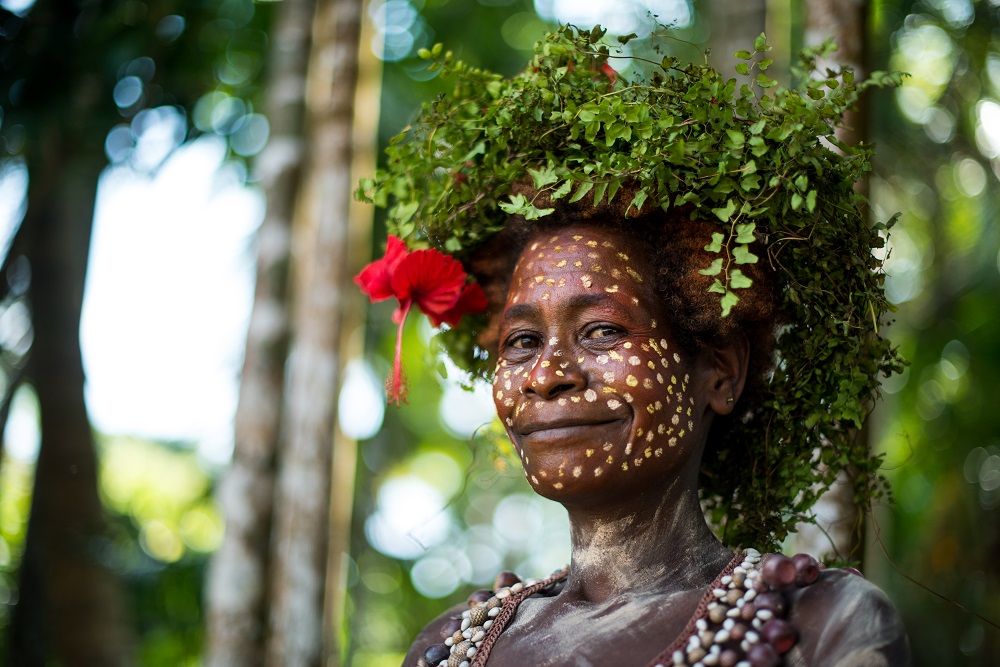 A friendly face at the Kundiman village.

I’ll never forget our visit to the Kundiman village, where the Yokim tribespeople greeted us in their finest traditional costumes – the women wore spectacular shell necklaces, colorful grass skirts, and elaborate headdresses decorated with flowers and ferns, while the men donned clay body paint, skirts of banana leaves, and fierce face paint. Men showed us how villagers along the Karawari have harvested the sago palm for centuries – I’m certainly not strong enough to smash sago fibers, and I probably never will be – while the women put on a cooking demonstration, treating us to traditional village fare. 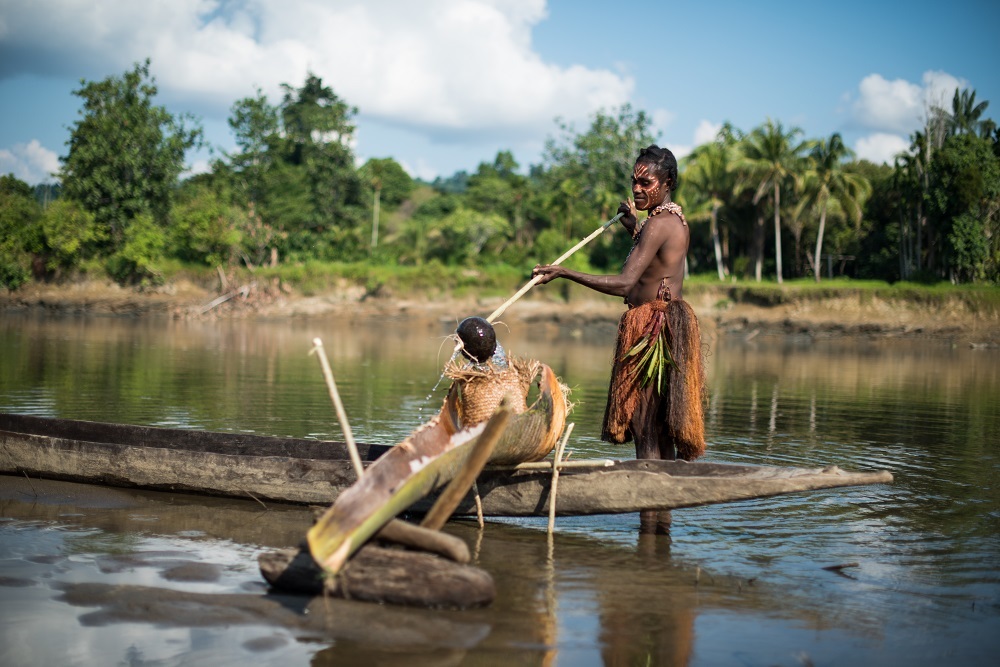 Processing sago palm is a labor intensive task, one that local villagers do not take lightly.

The kids laughed as our Swain crew sampled sago pancakes, and delighted in sharing with us their river games. We visited another village where we tried our hands at basket weaving; mine was originally supposed to hold live fish, though it’s unlikely I’d have been able to use it to catch a cold. We were treated to local lore inside a spirit house, and sat back in awe as Konmei villagers engaged in a spirit dance. 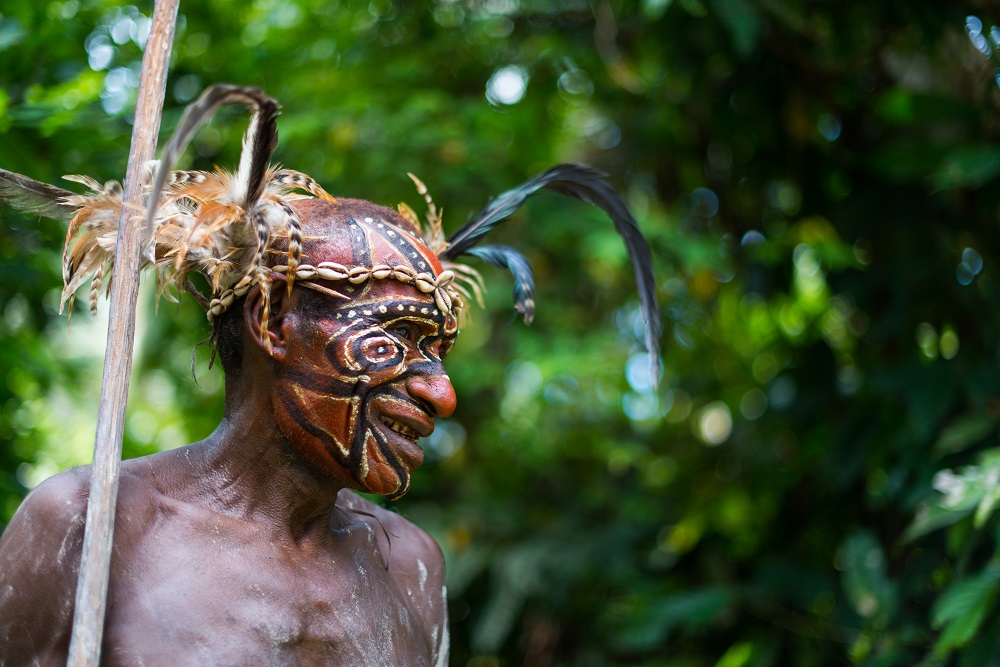 A Konmei villager in traditional costume, preparing for a ceremonial spirit dance.

Each village visit was a snapshot in time, and a showcase for a quickly fading aspect of traditional life – and when and where we were asked or given an opportunity to join an activity or speak candidly with local folk, our experience was that much more enriching. 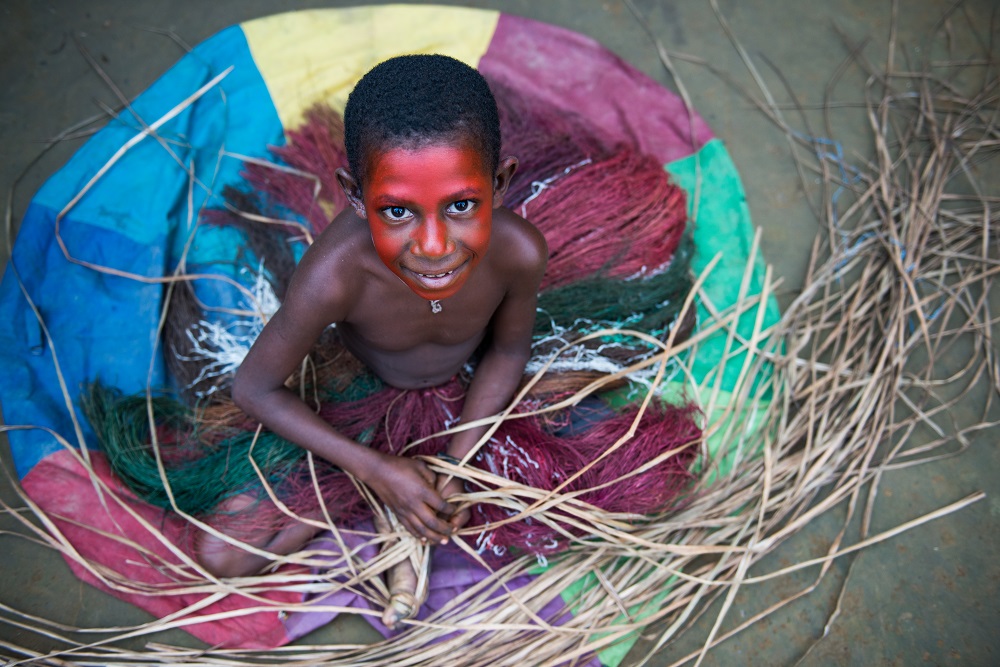 A lesson in basket weaving from a young girl.

We spent our nights at the beautiful Karawari Lodge, a rustic river outpost outfitted with more amenities than one would expect to find in this very remote part of the world. I treated myself to a South Pacific lager out on the balcony, where I kept watch on the setting sun. When the light burned out dozens of tiny fires came alive in the distance, each signaling the beginning of evenings of song and dance in the villages. I wasn’t worried about WiFi or email anything else but what stories were being exchanged down below me. I knew then that Papua New Guinea had captured my heart, and that I’d someday soon be back for more. 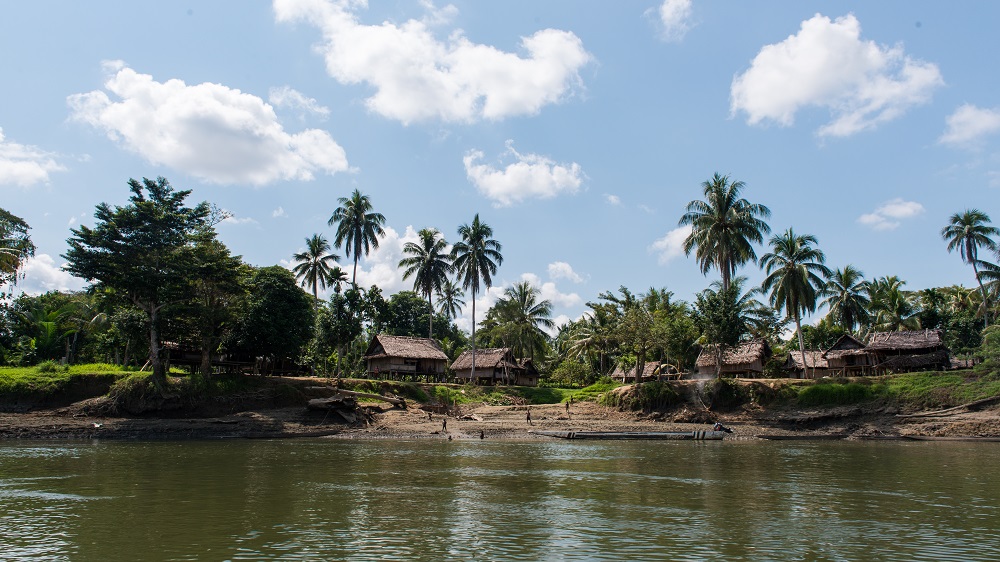 A snapshot of life along the Karawari River. 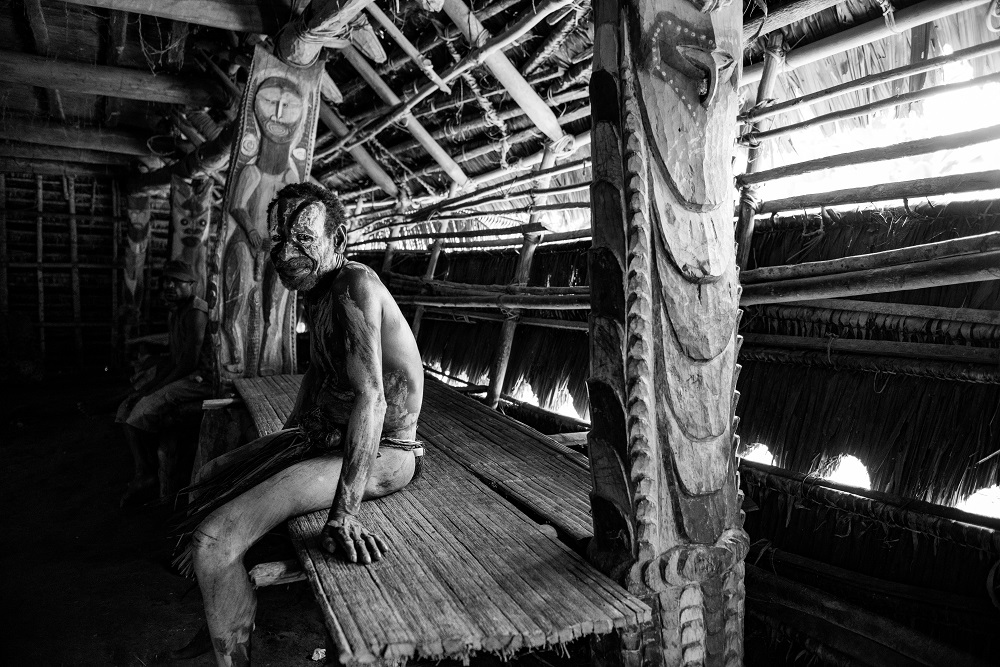 A glimpse inside an ancient men’s house.