by an AFAR Ambassador

I had never heard of Churchill, Canada.  I must have somehow glossed over my northern neighbor’s most central province in my junior high World Geography class, as well as on the wall-sized map that hangs over my camel colored sofa in my New York City apartment.  Although I had only been to Canada once, to its capital city of Toronto, the turquoise waters of Banff and Lake Louise, the modern and much talked-about hub of Vancouver, B.C. and the slopes of Whistler all ranked high on my “to travel to” list.  But Manitoba?  Any idea of this place was as unfamiliar to me as Tajikistan– even more so, as I had previously heard of Tajikistan. 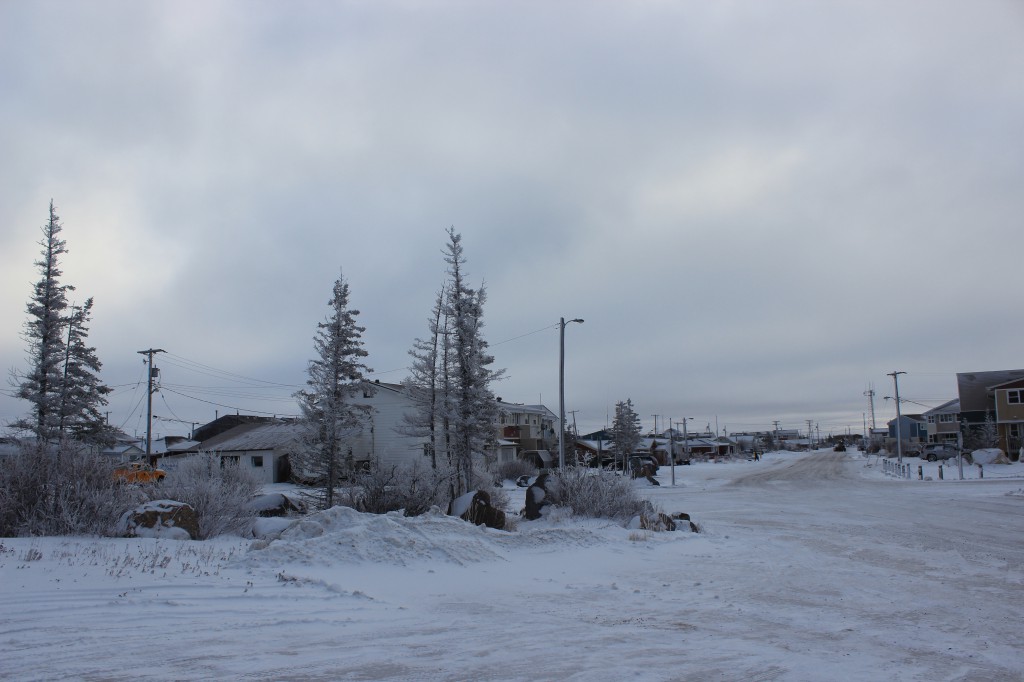 The town of Churchill)

Churchill, a town that claims 923 residents, but from what locals say only actually has about 600-700, is the polar bear capital of the world and is located in northern Manitoba.  It hugs the Hudson Bay and is a place where the First Nation people of Canada, the Inuit, Cree and Maite, have been for thousands of years.  They were a nomadic people for centuries, living off the land and hunting moose and caribou, and had found a way to make it in winter’s harsh conditions.  Yet, they never settled in this particular area that is now deemed Churchill, because they knew it wasn’t their land: it was the land of the Western Bay polar bear, who comes to this area every year in the months of October and November and waits for the sea ice to form on the Hudson Bay, in anticipation of their yearly migration northward to hunt for ring seals.  Canada established the town of Churchill right on the Bay, which served as an integral port for the fur trade of the early 17th century, as well as a military base during World War II and beyond.

On board my inaugural Tauck expedition, our group landed in Churchill and headed to the Lazy Bear Lodge, a cozy log cabin hand-built, owned and cheerfully operated by Wally Daudrich, his wife and his five children.  I stepped inside the Lazy Bear, and it felt like Christmas and coming home.  Filled with twinkling lights, candles and warm, crackling fires, the Lazy Bear Lodge and Cafe was our picturesque launching point for the week. 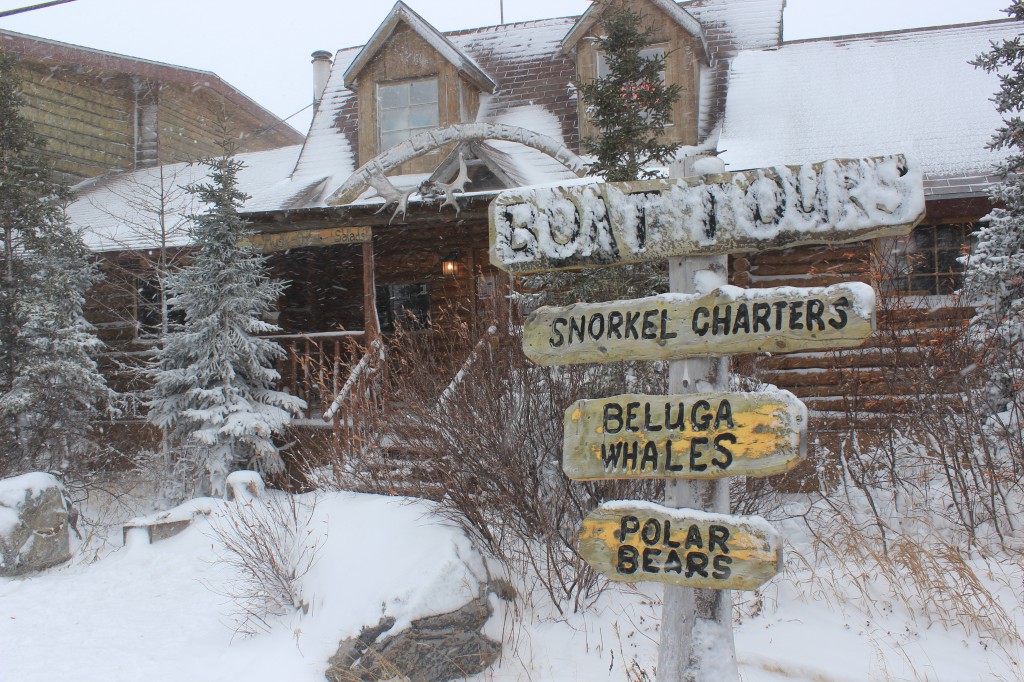 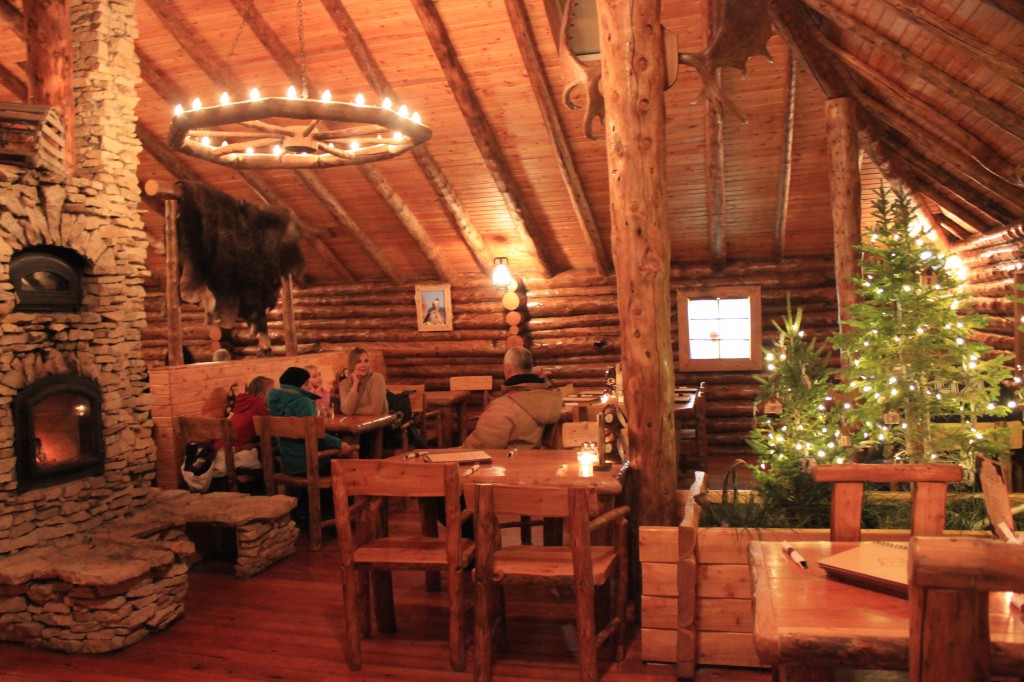 Inside the comfortable Lazy Bear Café.

The following morning, I bundled up in what must have been seven layers of clothing and headed out to the old school bus to meet our guide, Colin.  A true outdoorsman, from a small town in Saskatchewan and only in Churchill seasonally for the polar bears in October-November and the beluga whales in the summer, he is who you would hope to have at the helm of your polar bear expedition.  Colin teaches arctic survival courses and donned only a t-shirt with the face of a voracious and stoic polar bear on its front and back, with a light jacket.  We were ready to go. 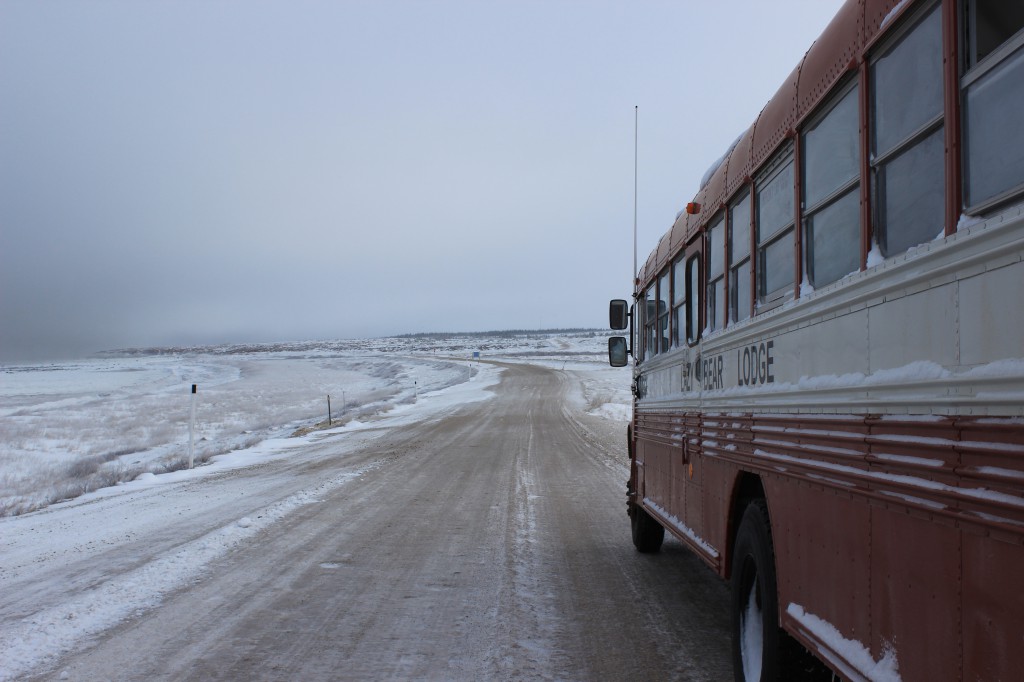 Headed out on our first day in search of the bears.

After a briefing on polar bears and how to stay alive if we happened to be cruising around Churchill on foot– which, at 38 degrees below Fahrenheit with the windchill factor, I found that to be a highly unlikely personal scenario– we set off along the Hudson Bay until we reached our crawler.  These Lazy Bear Lodge crawlers are specially built to navigate the arctic tundra terrain: massive, slick, snow-covered boulders, ice patches and brisk icy streams.  It looked like a mobile home on monster truck snow tires, perched high enough in the air to keep its inhabitants warm, dry, and from becoming a hungry polar bear’s lunch.

Every person or couple had their own window seat, and our Tauck guide, Dale, handed out binoculars and prepped us all with the realization that we may, or may not, see polar bears.  Tauck has recently partnered with the BBC to create some incredible content– footage, Dale reminds us, that takes wildlife photographers months to collect.  Her message was essentially this: although it is inspiring to know what these polar bears look like in such close proximity, this may not be your personal experience.  Right.  But of course, I was hoping to get face-to-face with a bear.  Everyone was.  It was the dream we all had when we booked this once-in-a-lifetime trip, and it was why we were all sitting bundled so tightly in these below freezing temps, looking like five-year-old children who had been over dressed by their mothers to go outside and build a snowman. 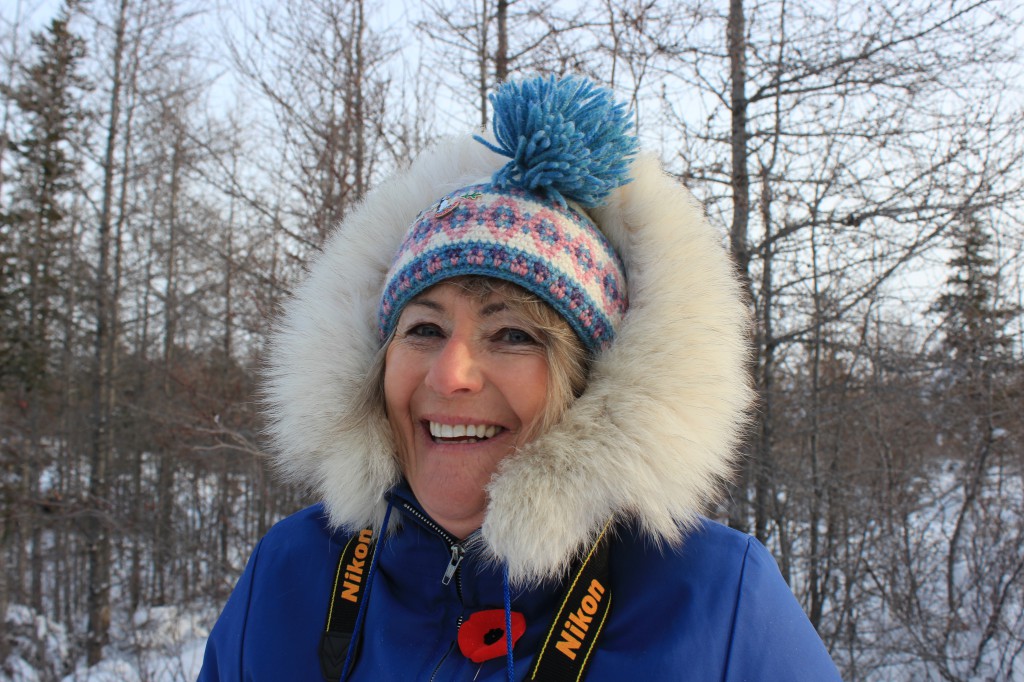 Within the first five minutes, we spot our first bear.  It’s lounging leisurely on some rocks in the far distance.  To the naked eye, it looks like a yellowish blob; the bears have been land-bound since the ice melted around June, which means that they’re not the pure white color they will be after they take a swim.  It also means they haven’t eaten in four months and are incredibly hungry.  If I had my last meal four months ago, I’d be hanging out on the banks of the Hudson Bay and waiting for the ice to form, too.  I looked down at my black ski pants and coat– might a bear mistake me for a land seal?  I hoped not. 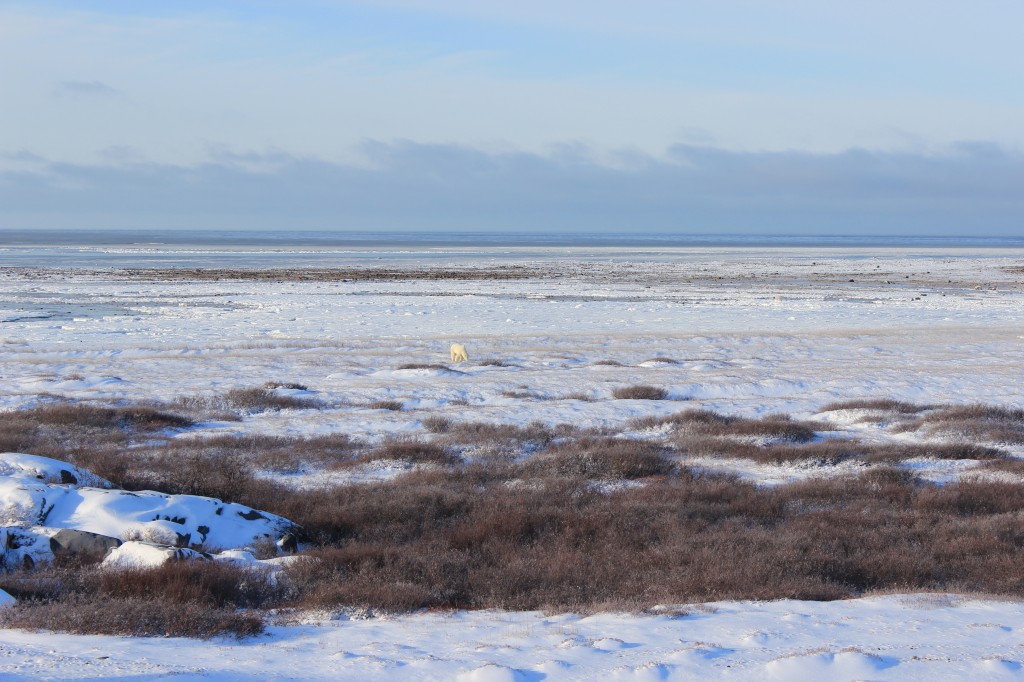 The bear stretches, and through my binoculars I can see that it gives a big, unamused yawn, stands up and goes behind some rocks, out of our sight.  It apparently was not in the mood to be seen.  But, we had spotted our first bear, albeit from a distance, within the first 30 minutes of the day.  Things were looking up.

We continued on our trek, and Colin, our local guide, as well as Dale, also a native Canadian, educate us about the bears, their habits, and about this land.  I am so fascinated by how much I didn’t know about a place that is relatively, all things considered, close to where I call home. 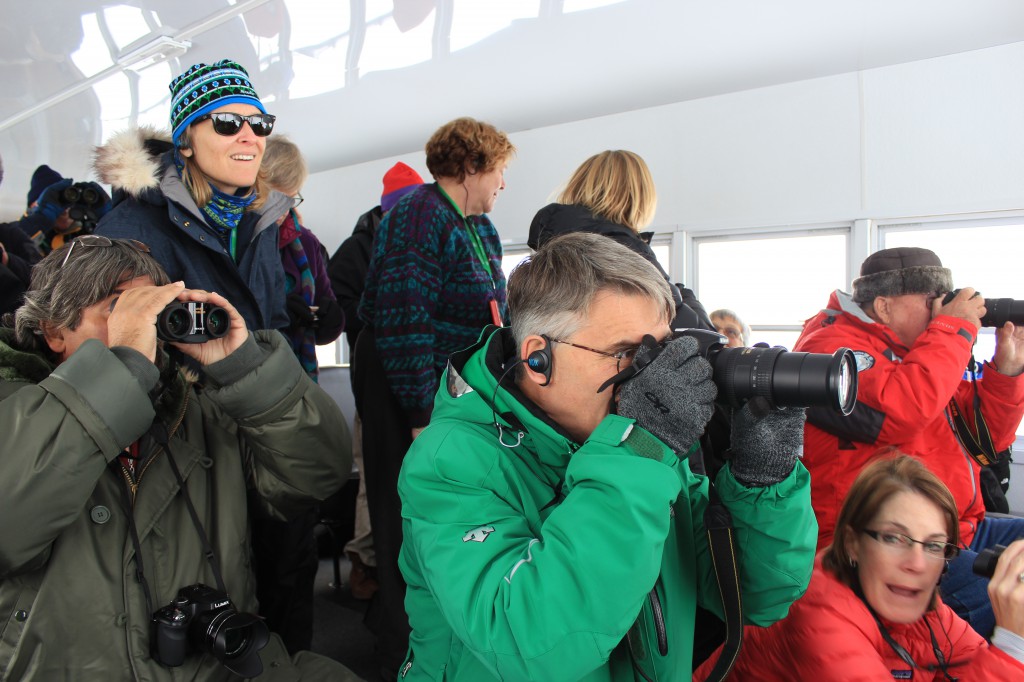 Everyone braced for a bear sighting.

The morning passes quickly and we all wait in anticipation to see our next bear.  After all, we now know that they’re out there.  We sit on the edge of our crawler seats, gazing out the windows to see some tone-on-tone movement of the off-white bears against the glittering white snow.  It’s lunchtime, and something about the cold seems to make you extra hungry.   Hearty sandwiches and chili come to our rescue, and we all take a slight break to relish in our hot meal.  My attention is completely and temporarily diverted and is focused solely on my steaming chili, when someone yells out, “bear!!!”  In an effort to not spill my lunch, I scramble to the window and see this majestic creature walking towards us, intentionally and stealthily.  I think he smelled the chili, too.  I discarded my lunch like last year’s fashion and quickly grabbed my camera.  He continued towards us and within minutes, was only feet away. 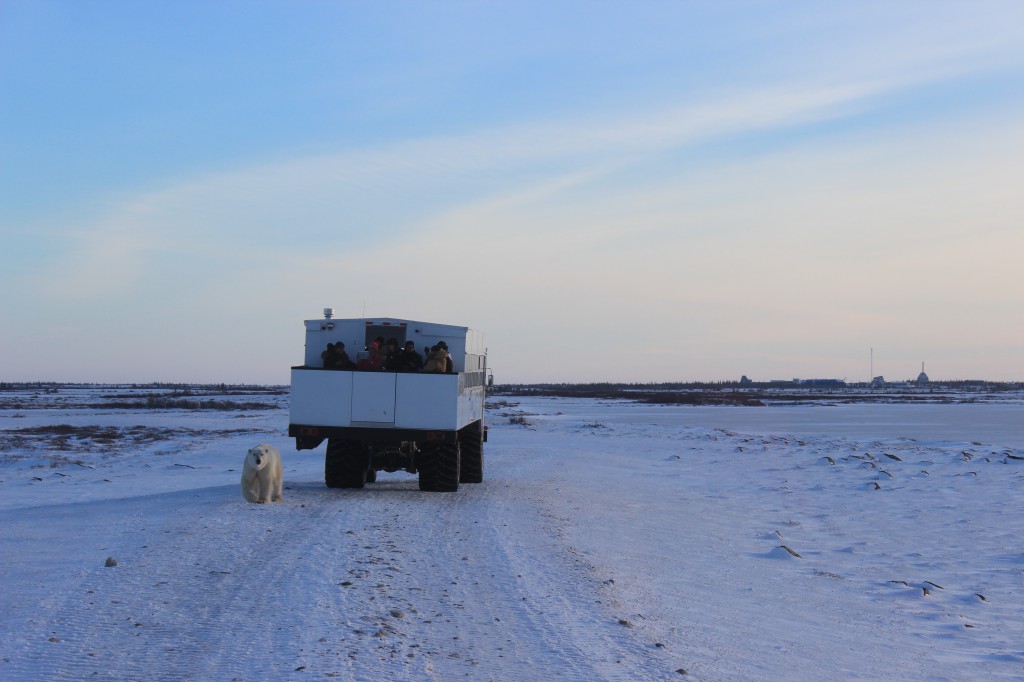 The bear behind the crawler in front of us, headed our way. 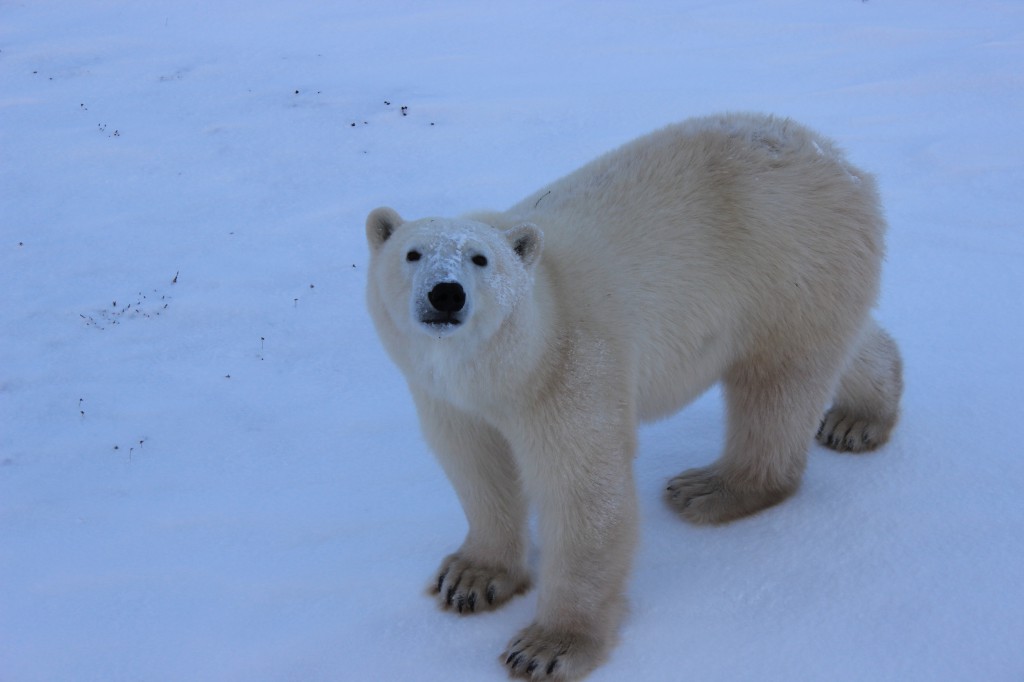 This polar bear was just a few feet from us, looking up at us as we looked back at him.

The crawler has a back porch kind-of feature, with a metal grate beneath your feet and a surrounding wall that is tall enough to keep the bears from being able to jump on in and have your for their meal, with a side of chili.  I ran outside as he headed towards the back, and we all grew still with the bear right below us.  His breathing was heavy and I could hear his low growl.  I squatted down and came within inches of his face.  We were eye-to-eye, and in that moment I had to remember who I was dealing with.  This polar bear didn’t want a Coca Cola, no matter how lovable he looked.  He came out from under the grate and rose up on hind legs, placing his paws on the ledge.  We all gasped and took a step back.  We were so close, that I could see the details of his claws and the light shining through the ice on his fur.  After a few heavy breaths, he lowered back down, and once he concluded he wasn’t getting chili or Tauck guests for lunch, he lumbered away and crossed a frozen lake, the arctic sun guiding his way. 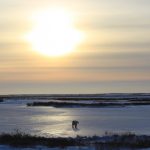 Quietness hung in the air and the only sound as he left was him crunching through the snow. 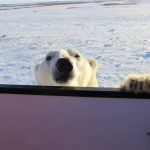 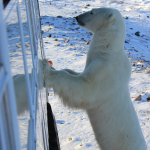 The bear as he rose up on his hind legs.

We all squealed like school kids.  We had literally gotten to come head-to-head with a polar bear in his natural environment, and that’s what this journey was all about: creating an experience that would serve as a vivid memory etched in all of our hearts, for the rest of our lives.

For highlights from this tour through Manitoba, please click here.